Accessibility links
Ledger Likely Is A Long Shot For Oscar, Critic Says The late Heath Ledger gave a brilliant, creepy performance in the new Batman movie, and he's got the sympathy of his industry. But one critic says Hollywood's a tough town when it comes to awarding posthumous Oscars. 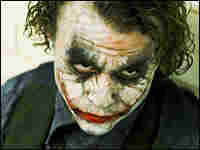 Actor Heath Ledger, who died of a drug overdose six months ago, will surely get an Oscar nomination for his performance in The Dark Knight, says film critic Tom O'Neil.

"He reinvented this classic villain," says O'Neil of Ledger's role as the creepy Joker in the Batman movie.

But although O'Neil says there's an industry outpouring for Ledger, there's no guarantee that the late actor will actually win an Academy Award.

O'Neill says Academy members don't vote for acting brilliance. And even though they do vote based on emotion, the sentiment in favor of Ledger may fade, given that Ledger will have been dead for a year by the time nominations are announced.

"Only one person has won an Oscar from the grave," says O'Neil, "and that was Peter Finch for Network." O'Neil points out that Finch died just weeks before the Oscar ceremony. "He dropped dead while campaigning for the Golden Globe, pumping hands in the lobby of the Beverly Hilton hotel," says O'Neil. "Hollywood was so overwhelmed with grief at just the time they got their ballots that he won."

Even screen legend Spencer Tracy didn't win an Oscar after his death. Tracy died in 1967, just hours after filming his final scene in Guess Who's Coming To Dinner. "He gave this magnificent performance," says O'Neil, who adds that Tracy had one of the greatest soliloquies of movie history. Everyone assumed that Tracy would win, but, says O'Neil, there was too much time between his death and the Oscars. Not only did he lose, but his co-star Katharine Hepburn won for a less significant role in the same movie.

"They wanted to recognize this death with an embrace, but they didn't want to hug the dead guy," says O'Neil, who adds that the Academy preferred to give an award to Tracy's "de facto widow."