Accessibility links
Angry Bloggers On Left And Right Unite Over FISA Democratic and Republican bloggers have joined forces to punish members of Congress who voted for a revised government surveillance bill backed by the White House. One independent online group raised roughly $350,000 to spend on anti-FISA TV and radio ads.

Listen
Angry Bloggers On Left And Right Unite Over FISA 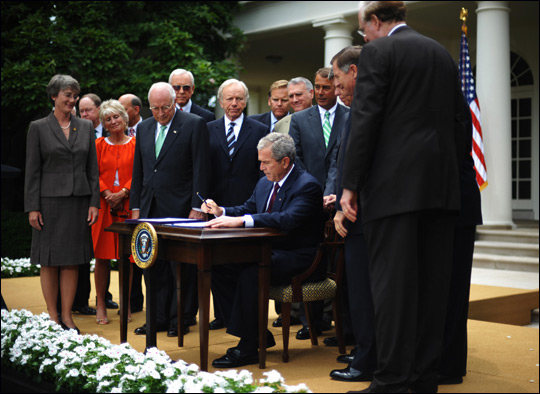 NPR's Martin Kaste interviews a Republican and a Democratic blogger, united by their anti-FISA views.

In the last couple of months, bloggers on both ends of the political spectrum have been railing against Congress's rewrite of FISA — the Foreign Intelligence Surveillance Act.

They say it makes it far too easy for spy agencies to vacuum up data from private phone calls and e-mails without meaningful oversight by an independent court. They're also upset that the legislation, signed by President Bush on July 10, gives immunity to telecoms that may have aided illegal government surveillance in the past.

The result of this online anger is The Strange Bedfellows, a Liberal-Libertarian joint effort to raise money to punish the Democratic and Republican lawmakers who sponsored the FISA legislation.

Bloggers across the political spectrum have been raising money in recent weeks in an effort to punish certain members of Congress for supporting a government surveillance bill backed by the White House.

Earlier this month, Congress passed a rewrite of the Foreign Intelligence Surveillance Act, known as FISA. Opponents say it gives the president too much power to tap private communications without court oversight. That argument was made none too subtly by a TV ad that ran in the home district of Chris Carney, a Pennsylvania Democrat who supported the new FISA law.

"Chris Carney is surrendering to Bush and Cheney the same un-American spying powers they have in Russia and communist China," the ad says.

Apparently, the ad hit a nerve. A Carney spokeswoman called the ad a "smear campaign" and said NPR should not do a story about it. But the ad was paid for by Carney's fellow Democrats.

Blue America is a political action committee promoted by Democratic bloggers like Jane Hamsher. She is disappointed with Congress since it went Democratic.

"I'm very upset with my party right now," Hamsher says. "They were given the majority, and they have a 9 percent approval rating right now for a reason."

Hamsher is especially angry about the changes to FISA. Proponents say those changes actually strengthen privacy rules for certain phone calls, but in fact, the bill also streamlines the government's ability to sweep up large amounts of data without court warrant. What really gets Hamsher's goat is the fact that congressional Democrats agreed to give immunity to phone companies that may have cooperated with past illegal spying.

"They gave George Bush everything he wanted on FISA, and he said so himself," she said. "I think they've shown no leadership, and that's why there's so much energy online for change."

Blue America raised $350,000 on this issue in just a couple of months. In the process, Hamsher made new friends, including blogger Rick Williams.

Although Williams considers himself a lifelong Republican, on FISA he sees eye-to-eye with left-leaning Democrats. He was a Ron Paul supporter, and he and other Libertarian-minded Republicans have joined forces with leftist bloggers in a new group called The Strange Bedfellows. Williams says they're planning a Ron Paul-style online fundraiser for Aug. 8.

"That's the day that Richard Nixon resigned the presidency," Williams said. "We feel that the Nixon example — his resignation — needs to be reinforced. No one is above the law — not President Bush, and certainly not a group of law-breaking telecoms."

Ron Paul's people call these online fundraisers "money bombs." If past performance is any prediction, the Strange Bedfellows group could find itself with millions of dollars to spend. It has been targeting FISA-supporting members of Congress with full-page newspaper ads and robo-calls, along with the TV ads.

"For a long time, we have supported Congressman Steny Hoyer," an anonymous speaker in one robo-call says of the Maryland Democrat and House Majority leader. "But last week, Congressman Hoyer just negotiated a deal with George Bush that let the big telecom companies off the hook!"

It remains to be seen whether any members of Congress need to worry about FISA fallout. Hoyer, for one, says he has not heard a lot of discussion in his Maryland district on these issues.

Hoyer says wiretapping is not going to sway any elections this year. "I think that the economy is the major issue," he said. "Changing our policy in Iraq, housing, the environment, global warming — I think those are going to be the major issues that the American people are concerned about and are going to address."

Still, the FISA issue looms large online. On Barack Obama's Web site, it's come to dominate the discussion forums. More than 20,000 of his supporters begged him to vote against the bill. He voted for it, but he made a point of sending them an explanation. The supporters were not satisfied.

Those Obama supporters have now spun off into a new organization — focused on producing a FISA TV ad of their own.