Accessibility links
Postal Service Takes Lead In Going Green Where do you look among federal agencies for smart thinking about renewable energy and alternative fuels? The U.S. Postal Service. Every 1-cent increase in the price of gasoline costs it an extra $8 million. That brings a keen motivation to innovate. 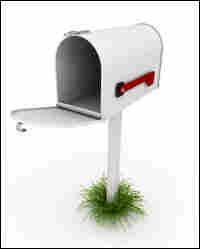 The U.S. Postal Service is a leader among federal agencies in thinking about renewable energy and alternative fuels. Patryk Galka/iStockphoto.com hide caption

The Postal Service, hip? Yep. If it had a bigger budget, you might know that already. But it hasn't hired a high-priced ad agency to market its green efforts.

So NPR issued a call for an ad campaign. Eastwest Marketing Group in New York City came up with some pitches:

Concept: Highlight USPS as thought and green leaders while providing simple messaging that delivers on the idea "fuel for thought."

When it come to fueling America's mail delivery ... We get the stamp of approval!

Yeah, I have a green streak! 43,000 alternative fuel vehicles, and proud of it!

Think about that U.S. Postal Service delivery pledge: Neither rain nor sleet nor gloom of night. Now, think about it with gasoline at $4-plus a gallon. And lots of stop-and-go driving.

Now remember, the Postal Service budget is funded entirely by postage stamps. Add it up, and what do you get? A keen motivation to innovate.

In Northern Virginia, there's a building — with no sign — that takes up the better part of a city block. It's the Postal Service's Engineering Research and Development Center.

Inside, there are four floors filled with engineers and technicians whose job it is to tinker with post office equipment and vehicles and make them better. There are mechanical, electrical, electro-optical and software engineers who test everything, including stamps and repositionable notes to make sure they're sticky enough.

In the automotive technology lab, a gas guzzler is on a hydraulic lift. It is one of 180,000 petroleum-fueled vehicles in the USPS fleet. Also in the lab is a truck fueled by compressed natural gas and another one fueled mostly by ethanol.

The Postal Service has the largest fleet of alternative fuel vehicles in the nation: 43,000 in all.

It's using solar cells to power some buildings. It's using eco-friendly packaging.

It's so hip, it even has a vice president of sustainability.

Walt O'Tormey, USPS vice president of engineering, says this independent federal agency is pushing harder than most to move away from petroleum.

"We're exploring all the alternatives in the marketplace for us, just to get out of gas consumption," O'Tormey says. "And we know we owe the environment ... to come up with a technology that does not impact the environment."

This summer, the Postal Service is testing the latest generation of hydrogen fuel-cell vehicles with General Motors.

"We'll test anything!" O'Tormey says. "Propane, compressed natural gas, biodiesel, electric. We have electric vehicles delivering packages in midtown Manhattan, and we have plenty of test sites, from the Grand Canyon to Alaska."

Renewable energy expert Matt Traum says the Postal Service is being smart about its future by testing a number of energy-efficient technologies.

"That's the hallmark of really good engineering," says Traum, who teaches engineering at the University of North Texas and writes about renewable energy for Design News.

"You build something, you test it, you find out what was wrong with what you built, and you improve on it," Traum says. "And that's exactly what the post office is doing."

Every 1-cent increase in the price of gasoline costs the Postal Service another $8 million in fuel.

And its fleet is getting older and older. While the Postal Service waits for the technology breakthroughs to help it figure out where to put its money, it's investing in ways to make these gas guzzlers last longer.

O'Tormey says the Postal Service is doing things like cutting out left turns and U-turns — and finding fuel efficiency improvement of 5 percent to 12 percent, he says.

More letter carriers are walking more of their routes. And they're using bicycles and subways. In the Grand Canyon, they're using mules.

O'Tormey says the nation's economy has been built on cheap oil. Now, he says, the U.S. Postal Service — like everyone else — has to change the game.