Accessibility links
What's The Future Of News? The content won't change that much, just how it's delivered, predicts media critic James Ledbetter.

Listen
What's The Future Of News? 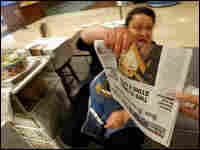 Newspapers are shrinking and folding. The networks' evening news broadcasts continue to lose viewers. And, thanks to digital technologies, there are now more ways to get news than ever before.

So what does the future hold?

The changes will be in how people get their news rather than in what that news actually is, says media critic James Ledbetter. In other words, the big difference will be in news delivery rather than in news content itself.

"The delivery methods will evolve," says Ledbetter. "But where the information comes from, what people want and need will probably stay pretty much the same."

Our interest in local news, traffic and weather during drive times, for example, will remain strong, but we won't necessarily be getting it from local television news, or even radio.

"It makes a lot of sense to have traffic information e-mailed to my car," Ledbetter says. More of us are going to be getting more news through hand-held devices such as iPods and Internet-connected phones.

Ledbetter says that while the growth of blogs has had an important impact on journalism, he still wouldn't rank it as the most important development of the last five years. He calls e-mail "the most important killer app that the Internet has brought us."