Accessibility links
America's Forgotten War: A Series Overview The war on drugs has been waged for 38 years, through seven White House administrations, in foreign coca fields and on America's streets, at an estimated annual cost of $40 billion. But what has it accomplished, and where does the U.S. go from here?

Four decades ago, the U.S. government declared a "war on drugs." From the rise and fall of kingpins to current efforts to interdict and stamp out drugs, follow events so far.

Voices from the Frontlines

The war on drugs has affected people from all walks of life. Listen to the stories of federal drug officials, and the personal experiences of a former drug dealer, a recovering drug addict, a former drug prosecutor and a mother who lost her son to drugs. 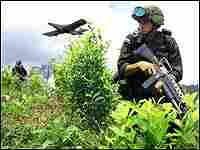 A Colombian soldier advances in a field of coca, while a plane sprays deadly defoliant in September 2000. U.S. and Colombian officials have declared their seven-year-long spraying policy a success. But Colombian coca production has not decreased — just dispersed to smaller, harder-to-find locales. Luis Acosta/AFP/Getty Images hide caption 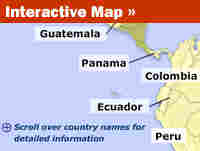 Nearly four decades ago, President Richard Nixon launched the war on drugs. In 1969 he declared, "Winning the battle against drug abuse is one of the most important, the most urgent national priorities confronting the United States today."

That battle has been waged through seven White House administrations; in recent years, experts estimate the costs have run close to $40 billion annually. It's been fought overseas, with programs to eradicate coca and heroin production in Latin America and Asia, and efforts to interdict drugs as they are smuggled into the country over land, sea and air. It's been fought on American streets, with a law-enforcement crackdown that has resulted in nearly a half-million imprisonments over the last few decades. And it's been fought in countless U.S. communities with programs to educate, prevent and treat abuse.

But after all these battles and all these billions, what's been accomplished?

Drug abuse among American youth has been on the decline for the past decade, and counter-drug efforts in recent years have resulted in record seizures of drugs. Yet in 2004, the last year for which the Centers for Disease Control has numbers, nearly 31,000 people died from drug abuse and related illnesses. At the same time, America's streets are swimming in cheap, plentiful and powerful narcotics.

Many experts believe it's time to come up with a new strategy. Currently, the biggest drug use in America stems from homegrown marijuana and prescription drugs. If that's the case, critics ask, why does the United States continue to spend billions in anti-drug efforts that end up pushing production from one Latin American country to another?

In a five-part series, The Forgotten War, NPR examines the progress so far and the challenges ahead in the war on drugs.

Correspondent John Burnett spent more than six months interviewing more than 100 people — including former drug czars, former addicts and drug smugglers, and Drug Enforcement Administration agents on the frontlines of the war. Reporter Juan Forero looks at efforts to fight drug production in Colombia. And correspondent Laura Sullivan reports on how the widespread incarceration of drug offenders in the late 1980s and early '90s is affecting American cities today.

Part 1 addresses the great debate in the war on drugs: What should take priority — controlling the supply of drugs through foreign operations, or controlling demand through prevention programs in the United States? For the past two decades, official U.S. policy has emphasized a balance in the two approaches. But when money is allocated, interdiction has largely won out over prevention. Even people who've dedicated their lives to the interdiction of drugs admit it's now time to shift focus to demand reduction.

Current anti-drug officials in Washington, D.C., say the war on drugs has had important successes, and that current strategies are working. But John Carnevale, a former top budget official who has worked for four drug czars, is among those who disagree.

"We've been trying to eradicate and spray our way out of this problem for two decades, and it hasn't worked," Carnevale says.

The debate continues in Part 2 with a look at Plan Colombia, a multi-billion-dollar effort — begun under the Clinton administration and continued under President Bush — to reduce coca production in Colombia by half. After seven years of spraying a deadly defoliant in rural Colombia, the huge industrial-sized fields of coca are gone, and both U.S. and Colombian officials are declaring the policy a success. But as Juan Forero reports, Colombian coca production has not decreased — just dispersed to smaller, harder-to-find locales. Still, Plan Colombia is credited with assisting the Colombian army combat leftist rebels, who controlled much of the drug trade in the past, and with helping to extradite hundreds of drug traffickers.

In Part 3, John Burnett examines demand reduction. Colombian and other Latin American politicians have long blamed the drug problem on America: Reduce demand at home, they say, and drug production, smuggling and related violence will decrease.

Many policy analysts agree. They credit the significant drop in American youth drug use to prevention efforts, not law enforcement and foreign interdiction. Burnett profiles a small community organization in San Antonio that uses a holistic approach: parent anti-drug education, peer-to-peer counseling, drug courts, public service announcements, treatment and halfway houses. Cops, counselors and former addicts say the war on drugs has to be won one person at a time.

In Part 4, Crime and Punishment Correspondent Laura Sullivan looks at the impact of nearly a half-million drug offenders locked up in the nation's prisons. Hundreds of thousands of those inmates are now pouring out, many having served 15-to-20-year sentences for drug offenses. For the most part, they return to the neighborhoods they came from. That's straining cities like Oakland, Calif., which is overwhelmed by ex-convicts who lack access to rehabilitative programs, drug counseling and job training.

U.S. counter-drug policy emerges from the White House Office of National Drug Control Policy. The man who has run that office for the past seven years, our nation's current drug czar, is the subject of Part 5. John Walters is the public face of the drug war. But experts are concerned that the war on terrorism has pushed the war on drugs off the nation's radar screen.

This year, for the first time in two decades, spending on federal anti-drug programs would decline under the current budget proposal. Many activists blame Walters for a lack of leadership. Drug abuse runs in cycles, they maintain: Right now America is in a lull, and many indicators show abuse is declining. This is not the time to back off, they say, but to push for a new and smarter policy that incorporates 38 years of experience.

Alisa Barba, Western bureau chief for NPR's National Desk, edited this series. It was produced for broadcast by Marisa Penaloza.