Accessibility links
Monty Python's Eric Idle Resurrects 'Life Of Brian' The Monty Python funnyman is back with Not The Messiah, an adaptation of the 1979 film Life of Brian. He reprises some of the original songs and characters, and laments that the sheep get more applause than he does. 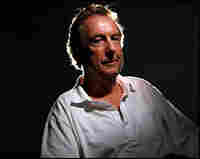 One of the stars of the comedy team Monty Python, Eric Idle is back with Not the Messiah (He's a Very Naughty Boy), an adaption of the 1979 movie Life of Brian. David Gilkey/NPR hide caption 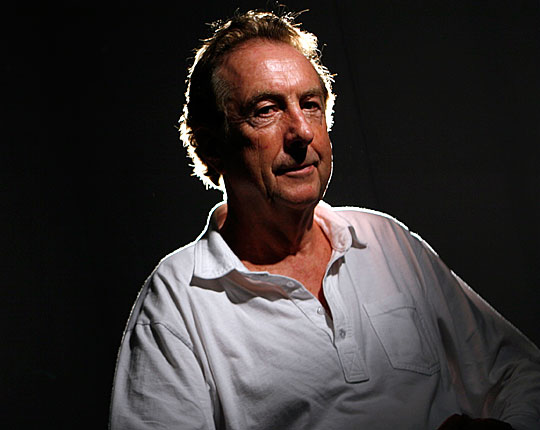 One of the stars of the comedy team Monty Python, Eric Idle is back with Not the Messiah (He's a Very Naughty Boy), an adaption of the 1979 movie Life of Brian. 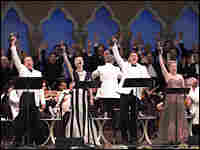 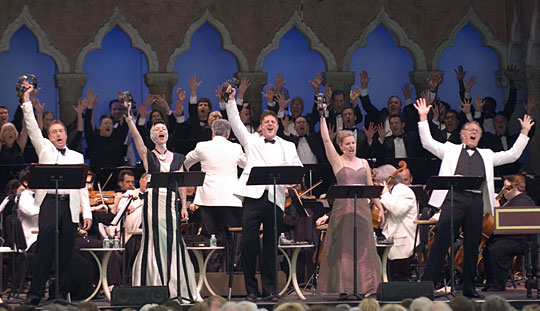 Idle (far left) performs in the U.S. premiere in Katonah, N.Y., in June.

Eric Idle of the comedy troupe Monty Python thinks it's time for something (almost) completely different. Several years ago, he reworked one of the group's classic sketches into a hit Broadway musical. And he's done it again — this time an oratorio based on their 1979 movie, Life of Brian.

Idle's latest creation is called Not the Messiah (He's a Very Naughty Boy). A spoof of Handel's Messiah, it riffs off Life of Brian to tell the story of a boy who joins the Republicans, who are desperate for power in ancient Judea. A mob mistakes Brian for the Messiah, "which is a dreadful tragedy for him, because he's then arrested and crucified," Idle says.

Not the Messiah is scheduled to be performed at the Wolf Trap National Park for the Performing Arts in Virginia and at the Hollywood Bowl in Los Angeles before heading off to London next year in time for the 40th anniversary of the TV series Monty Python's Flying Circus.

The music for the hour-long oratorio is by John Du Prez, who was Idle's collaborator on the Broadway musical Spamalot, a reworking of the classic movie Monty Python and the Holy Grail. Although Spamalot won a Tony Award in 2005, Broadway is not in the future for Not the Messiah.

"We deliberately set out not to do a musical," Idle tells NPR's Robert Siegel. "We made too much money, so we thought, 'Let's find something that won't make any money at all. Let's have 140 musicians on stage.'"

Despite the subject matter, Idle says so far there haven't been any complaints about blasphemy since the show had its U.S. premiere last month in Katonah, N.Y.

"It isn't offensive in reality," Idle says. "The pope could come, Jesuits could come and enjoy this, because it also parodies the tradition of secular religious music over the last 300 or 400 years."

In the oratorio, one person asks, "Is it A.D. yet?" Shepherds sing about how much they love sheep, and a group dressed as sheep sing the "sheep sheep sheep sheep" chorus.

"There's a shepherdess, and the sheep have their own bodies and they're politically correct sheep — they're all ewes," Idle says. "And Shaniqua is the black sheep of the family and they sing. They actually get more applause than we do, it's rather annoying."

In Not the Messiah, Idle reprises the song that he sung in Life of Brian while hanging from a cross: "Always Look on the Bright Side of Life."

"As long as you can recycle, that's just fine," Idle says. "That song is in the top 10 of songs sung at funerals. Everybody keeps count of everything."

"'Always look on the bright side of death,' is one of the lyrics — just before you enjoy your terminal breath. It's an anthem. It's actually sort of a wartime song, it's a sort of parody wartime, because all of our fathers were in World War II," Idle says. "And so it has that cheery, brighty, blue birds over the white cliffs of Dover cheery-uppy kind of quality to it."