Accessibility links
Jeff Koons Has A 'Ta-Da' Moment In Chicago Naked ladies, rabbits, basketballs and a big, shiny blue heart are all on display at the Museum of Contemporary Art, courtesy of the American painter, sculptor and artist-provocateur. The exhibit leaves most visitors smiling, laughing or just plain puzzled.

Listen
Jeff Koons Has A 'Ta-Da' Moment In Chicago 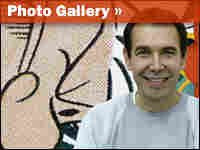 Naked ladies, rabbits, basketballs and a big, shiny blue heart are all on display at Chicago's Museum of Contemporary Art, courtesy of American painter, sculptor and artist-provocateur Jeff Koons.

A very successful artist — his shiny blue heart sold for more than $23 million not long ago — Koons is one of the best-known and most popular artists of his generation.

On a recent day, most visitors to the Koons show were smiling, laughing or puzzled.

One person smiling was Andrew Vasalinovich of Chicago.

"I love Jeff Koons," Vasalinovich said. "He's a lot of fun. I like artists [who] encourage a positive outlook on the world."

Among the puzzled was Will Barzhay, who lives near Cincinnati. Will, age 12, was standing in front of Koons' "Three Ball Total Equilibrium Tank" — three Spalding basketballs, suspended in distilled water in a rectangular glass box.

"They're just floating," Barzhay said. "It's strange. All he used was a fish tank and a ball."

Koons made the piece in 1985 as part of a series titled "Equilibrium." It featured different numbers of balls suspended in liquid.

Portrait Of The Artist

Also on display is a work titled "The New Jeff Koons." It's a lit-up, blown-up photograph of a small boy with his Crayola set.

In the sepia-toned image, Koons looks to have been about 7 years old, with carefully combed hair, posing with a crayon in hand.

"It's a perfect photo of Jeff as an artist. The portrait of the artist as a young boy," said Trisha Van Eck, the curatorial coordinator at the Museum of Contemporary Art. She helped guest curator Francesco Bonami and Koons himself put the Chicago show together.

"It's typical of everything that Jeff does," Van Eck continued. "He changes the context.... Everything that he does is some kind of magic that he spins on the work."

In this case, Koons, 53, has taken an old snapshot his grandmother may have carried around in her wallet, enlarged it, backlit it and put it in an exhibition.

The artist came home one day to find his son drawing, Van Eck said. And the boy announced he was finished by saying, "Ta-da."

In the ta-da category, the Chicago show includes a shiny red lobster and, most monumentally, a massive, shiny orange dachshund made in specially colored stainless steel.

"It is what it is," curator Van Eck said. "It's shiny, it's big, it's perfect. It's taking objects we're all familiar with and making them larger than life."

"Jeff would say everything he does is art," Van Eck said. "He has always tried to cross boundaries between what is art and what is not, what is high art, what is commercial product."

As for the basketballs, it can be a challenge to keep fancy art theories in mind when viewing everyday items that have been placed in a case — and in a museum.

Koons, Van Eck said, is "looking at what's already out there in the world, subtly twisting it, representing what you like as a person. You like basketballs. They're here. Why shouldn't basketballs be art?"

In a lecture at the museum, Koons put it this way:"For me, art really starts with acceptance, self trust. Wherever you come to with art, it's perfect. You don't have to come with anything. What you bring to something is the art. That's where it's found. It's found within you."

A Knack For Populism — And The Commercial

Jeff Koons has his critics, of course. One of them is Robert Hughes, erstwhile art critic for Time magazine. Speaking on NPR once, Hughes had this evaluation of Koons:"He's one of those guys who would have been ... brilliant at selling swamp in Florida or raising money for the excavation of entirely fictional gold mines in Nevada."

Curator Van Eck agrees that Koons has a talent for selling things, along with a savvy sense of the art world and its market. But, she says, he also has a deep sense of art history, aesthetics and creativity. And that outweighs criticism from the experts.

"He's not interested in that critical dialogue," Van Eck said. "He's going to look around — what do people like, I'm going to show them that. And critics don't like that."

But if the smiling crowds in Chicago are any evidence, the people like Jeff Koons just fine.

The exhibit Jeff Koons is at the Museum of Contemporary Art in Chicago until Sept. 21.