Accessibility links
Ford Shifts Production Focus To Smaller Cars After posting an $8.7 billion loss for the second quarter on Thursday, Ford announces plans to switch manufacturing operations at three North American plants from trucks to small cars. The auto industry has seen a dramatic decline in truck and SUV sales in recent months as consumers react to high gas prices. 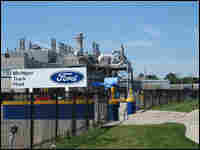 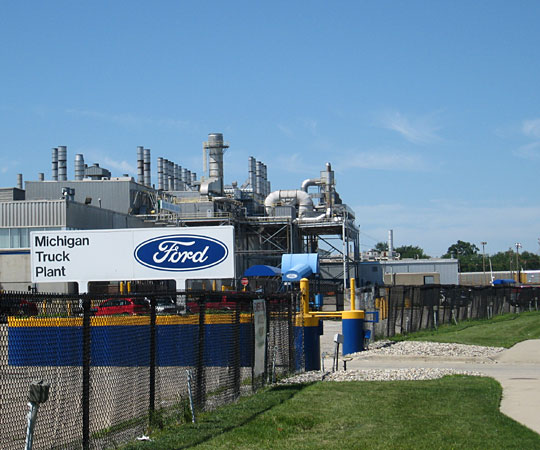 Production at the Michigan Truck Plant in Wayne, Mich., is shifting from sport utility vehicles to small cars.

Ford Motor Co. posted an $8.7 billion loss for the second quarter on Thursday — the worst quarterly performance in the company's 105-year history and another sign of the U.S. auto industry's woes.

Most of the loss came from one-time charges, but the loss on operations was still more than $1 billion. Consumers hit by high gas prices and falling home values have shied away from trucks and sport utility vehicles, Ford's mainstay. In response, Ford announced a new plan Thursday to focus more on smaller, fuel-efficient cars.

Ford has a lineup of small cars in Europe that's ideally suited for where the U.S. market seems to be headed. Ford CEO Alan Mulally said six of those small European models would be sold in the U.S. starting in 2010. He called the move a strategic decision based on environmental changes and customer demand.

"And to get that full product line, Ford plans major changes to its manufacturing operations in the U.S.," he said at the Michigan Truck Plant in Wayne, just outside of Dearborn. The plant has been making trucks since 1964.

"Ford stopped production here a month ago because this plant builds big SUVs, and people aren't buying big SUVs right now," Mulally said. "So the plan is to take this plant and switch it over and make small cars here instead."

Ford also plans to shift production to smaller vehicles at a plant in Louisville, Ky., and one in Cuautitlan, Mexico.

According to David Cole of the Center for Automotive Research, there is one factor that could complicate Ford's plan: "We really don't know what the price of fuel could be in a year. It could be $5 a gallon, it could be $2 a gallon, and so one of the business imperatives for companies like Ford ... is to do everything possible to become more flexible and agile."

Cole says that even if Ford moves quickly, it could take the company more than a year to switch out its truck plants.

"And, in part, it's not governed by how fast you can get people in the plant and move stuff around," he says. "You've got to depend on tooling. You've got to depend on manufacturing equipment that might have to be ordered. And you may have to wait in line with other people that are trying to order the same kind of thing. It's a huge challenge."

When Ford switches its truck plants, Mulally said, it will design them to be even more flexible going forward, so that the next time the market shifts, Ford can be quicker to respond.