Accessibility links
On Russian Disarmament, Candidates Agree Both John McCain and Barack Obama support nuclear disarmament of Russia. McCain, however, wants to go one step further, kicking Russia out of the G-8. 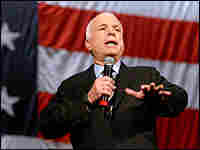 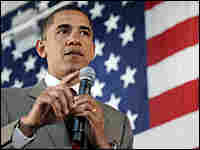 Both John McCain and Barack Obama have called for a reduction in Russia's nuclear arsenal, but McCain has taken a tougher stance against Russia politically. Here is where the candidates' policies toward Russia differ:

McCain: He has said that Russia should not be a part of the G-8 and he has publicly admonished Russia for silencing political dissent. McCain has pledged to work more closely with Russia towards nuclear disarmament.

Obama: He would work with Russia to "take U.S. and Russian ballistic missiles off hair trigger alert." Obama also wants to see a reduction of nuclear stockpiles in both America and in Russia and extend the ban on intermediate-range missiles to include Russia.

John McCain often joked that when he looked into former Russian President Vladimir Putin's soul, he didn't see — as President Bush did — a man he could do business with, but rather an ex-KGB officer consolidating power.

Though Russia has a new president, Dmitry Medvedev, McCain has kept up his tough line, accusing the Russian government of silencing political dissent at home, using energy as a weapon abroad and launching a cyber war against Estonia.

McCain, the presumptive Republican nominee, said in a speech in Los Angeles in March that NATO should not stand for such actions, nor should the Group of Eight.

"We should start by ensuring the G-8 — the group of eight highly industrialized states — becomes again a club of leading market democracies," McCain said. "It should include Brazil and India, but exclude Russia."

McCain has talked about kicking Russia out of the G-8 for several years now. Susan Rice, a top foreign policy adviser to Democrat Barack Obama, says speeches like that show McCain is stuck in a Cold War mind-set, trying to demonize Russia.

"John McCain really has a static — I would even argue retro — mid-late 20th century national security orientation, which is ill suited to the challenges we face," Rice said, adding that she sees some contradictions within the McCain campaign.

"These strange and counterproductive rhetorical stances that the neoconservatives around John McCain are advocating — like kicking Russia out of G-8 — are really at odds with our interests but with other aspects of John McCain's foreign policy," Rice said. "He never reconciles how he kicks Russia out of the G-8 one day and cooperates with Russia the next day on nonproliferation and loose nuclear materials, for example."

Scheunemann, a longtime critic of Russia and someone who has gotten used to the neoconservative label, argues that McCain is actually being realistic about Russia and will tell it like it is when it comes to Russia's retreat from democracy.

"Would it complicate other aspects of the relationship? It certainly may," Scheunemann said. "But I think if you look at how President Reagan handled relations with the Soviet Union, he was criticized roundly for calling the Soviet Union an evil empire, and yet within a couple of years was negotiating very effectively with the next generation of Soviet leaders."

This is another area where McCain has been distinguishing himself from the Bush administration, which disdained arms-control treaties. McCain has talked about the need for verifiable agreements with Russia to reduce nuclear arsenals. But so, too, has Obama, who worked with Republican Richard Lugar on the Senate Foreign Relations Committee on efforts to control loose nuclear materials.

In his speech in Berlin today, Obama talked about the goal of a nuclear-free world and the need to work with Russia.

"In this century, in this city of all cities, we must reject the Cold War mind-set of the past and resolve to work with Russia when we can, to stand up for our values when we must, and to seek a partnership that extends across this entire continent," Obama said.

Some officials in Europe have sounded uneasy with McCain's tough talk about kicking Russia out of the G-8.

Obama seems to be playing up the differences in his tone and approach, but the policies he promotes sound fairly similar to McCain's. Obama, too, has said he won't ignore what he calls the "democratic erosion inside Russia." He describes Russia as neither an enemy nor an ally.