Accessibility links
Mingus' Magnum Opus: 'Epitaph' In Concert Charles Mingus' monumental masterpiece "Epitaph" never saw the light of day during his lifetime. But the tempestuous jazz legend left his ambitious score to be discovered by new generations. Hear the full piece, a 2 1/2-hour affair for 31 musicians. 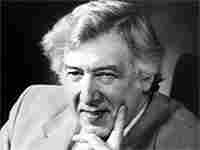 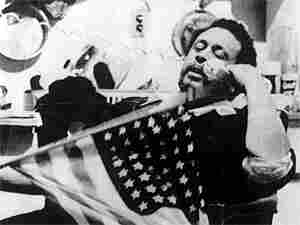 Charles Mingus' abortive attempt to perform "Epitaph" ended in disaster, and led him to abandon the work. But scholars have reconstructed the piece after his death. Teppei Inoguchi/Jazz Workshop, Inc. hide caption

As creative chair for jazz at the Los Angeles Philharmonic, bass player Christian McBride gets to program four concerts a year. The moment he got the job, he put Charles Mingus' monumental, 2 1/2-hour jazz symphony "Epitaph" at the top of his list.

Jazz historian and composer Gunther Schuller conducted the entire concert in front of a 31-piece jazz orchestra. He says that Charles Mingus was a man of many moods — and that he sees them in the very fabric of Mingus' masterpiece.

"I knew him quite well," Schuller says. "He could be as gentle as a baby, and he could also be so full of tantrums and explosive and angry, and all of this range of feelings is in this piece. It's all there: It's like a musical picture of Mingus' personality — from the most beautiful gentle ballads, lyric pieces, to these extremely chaotic, disorganized, wild pieces."

By the time "Epitaph" premiered in 1962, Mingus was already well-known as a composer, bandleader, and virtuoso bass player, a musician who had worked with Miles Davis, Charlie Parker, and Duke Ellington, among others. But how Mingus came to write the piece remains something of a mystery.

Gunther Schuller says Mingus probably composed most of the piece over a three-year period in the late '50s. He scored it for a 31-piece double jazz orchestra, and got an all-star group to play it. But the first performance was a travesty.

"There's this famous, legendary disastrous concert and recording session in Town Hall [in New York], where I happened to be present," Schuller says. "And it was one of the most chaotic and frustrating and disastrous concerts that anybody has ever heard, because the music was so difficult and so strange. He hadn't had a chance to rehearse it properly and the copyists were, indeed, even still copying some of the music –- it wasn't even fully ready. And so the musicians couldn't handle it, and so eventually the concert was aborted when the union stage crew said, 'Wait a minute, it's midnight, we've gotta stop this.'"

Distraught, Mingus never visited the score again in his lifetime. But 10 years after his death in 1979, the score — four feet high and 4,235 measures long — was discovered in a closet in his apartment. Composer and arranger Andrew Homzy reconstructed it, and Schuller conducted the premiere in 1989. According to Schuller, the work was titled "Epitaph," because a few movements in the score had that word in block letters.

Astonishingly, when the enormous score for "Epitaph" was found, it was missing one thing -– a finale. So Schuller says that he and the band improvised one, using Mingus as a guide.

"I decided, in putting this piece together, that we should do what he did so many times in his own appearances at clubs with his groups –- that is to say, he dictated an ending," he says. "And he would cue everybody: What they should do and when they play and be hollering and playing on his bass at the same time. And so we did something like that for the entire orchestra."