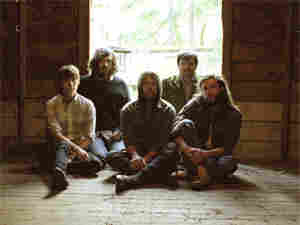 With a sound combining the baroque psychedelic pop of the '60s, sacred harp singing, gospel, and folk music, Fleet Foxes joins host David Dye for the latest in World Cafe's Lillywhite Sessions series from Avatar Recording Studios in New York City. The band's members grew up on the music of their parents: The Beach Boys, Simon & Garfunkel, The Zombies, Love, and Crosby Stills & Nash.

Robin Pecknold and Skye Skyelset are backed by some of Seattle's best musicians, including past and present members of bands such as Pedro the Lion, Seldom, and Crystal Skulls. Through the support of friends, families, and credit cards, material for both the Sun Giant EP and Fleet Foxes' self-titled debut were recorded. Both showcase an inventive, unfailingly sweet sound that spans genres and eras.