Accessibility links
The Uglysuit: 'Chicago' The debut, self-titled album from Oklahoma City-based band The Uglysuit is refreshingly bright and cheery, replete with huge spirit-raising piano and guitar anthems. With a blend of spacey dream pop and a few alt-country flavors (lead singer Israel Hindman's voice mimicks Jeff Tweedy one minute, Conor Oberst the next), the group's sound draws comparisons to the Flaming Lips and the Shins, but the grandiosity of the music is that of space rock proportions. 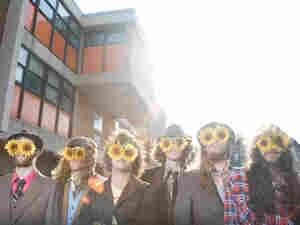 The debut, self-titled album from Oklahoma City-based band The Uglysuit is refreshingly bright, with huge, spirit-raising, piano and guitar anthems. The group mixes artful dream pop with a few alt-country flavors (lead singer Israel Hindman's voice mimicks Jeff Tweedy one minute, Conor Oberst the next), and has been compared to the Flaming Lips and the Shins. But the grandiosity of The Uglysuit's music has space rock proportions.

Much of the album consists of slow build-ups to epic, wall-of-sound climaxes. "Brad's House" opens with a few simple piano chords, but evolves into a huge chorus of soaring, reverb-heavy vocals. "Everyone Now Has a Smile" comes to a rousing finish with a sea of swirling melodic guitar lines set against a gospel style organ. Ironically, "Happy Yellow Rainbow" is the most raucous track on the album, degrading into a thick mix of loud, clashing guitars — tension that is released in the sweet piano melody of the closing track, "Let It Be Known."

"Chicago" stands as the most immediately accessible track on the album, as well as its most country-influenced, at least at the outset. The song finds Hindman's somber vocals echoing Elliot Smith, but when the music kicks in with rock pianos for the sing-along chorus, the radiant, dreamy sound begins to remind the listener of Brit-pop band, Travis.

Of the six members of The Uglysuit, four have been playing together since their early teens. "Around when we were 12 or 13 we got instruments," explains guitarist Colin Bray, whose brother Crosby is the band's drummer. Bray says the childhood friends, now in their early 20s, got serious about music early on. "We all realized that music is what we wanted to do and wanted no part of the corporate world when we were around 15." The band went through periods of playing a number of different genres including punk and harder rock with "lots of screaming" before finding their sound. "Thank god we got out of that," Bray says.