Accessibility links
Lenape Indians, The Original Philadelphians The Lenape Indians were the first inhabitants of what is now Philadelphia. Tribe member Chet Brooks tells NPR's Robert Smith about the tribe and how the community maintains its traditions today. 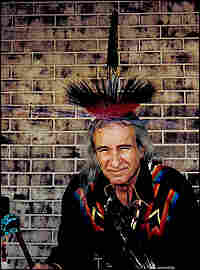 Chet Brooks hopes to pass on the history and traditions of the Lenape tribe to future generations. Courtesy of Chet Brooks hide caption

The Lenni-Lenape Indians were the first known settlers of the area that is Philadelphia. Chet Brooks of Oklahoma is a member of the tribe, and he has devoted the past 36 years to studying and preserving Lenape history and tradition.

Brooks told NPR's Robert Smith that the Lenape Indians occupied the Philadelphia area almost 10,000 years before Europeans came to the region. Those settlers renamed the tribe, calling them the Delaware Indians, because they had trouble pronouncing Lenape (Leh-NAH-pay). Before the "Delawares" were forced off the land, they inhabited the region that is now New Jersey, as well as the area along the Delaware River in Pennsylvania and the Hudson Valley and New York Harbor, in New York.

The Lenape signed their first treaty with William Penn in 1683, a document that Brooks says is often referred to as "the treaty that was never ratified, but never broken." Although Penn treated the tribe fairly, his son, Thomas, took a different approach. He tricked the Lenape into giving away their land, and the tribe moved West in what became known as the Delaware Westward Trek. Most tribe members now live in Oklahoma. Brooks says only about 985 Lenape survived the trip to Indian Territory — a number far reduced from the estimated 15,000-20,000 Lenape who lived on the East Coast before white settlers arrived.

In order to keep the tribe's culture alive and thriving today, the Lenape in Oklahoma hold weekly classes to study language, make traditional clothes and practice dance. One dance, the "Go Get 'Em Dance," involves men dancing around a fire while women stand in a line. The men tap the woman they want to dance with on the shoulder, sometimes choosing several women, depending on the number in line.

Brooks says that someday he would like to return to his homelands on the East Coast, set up a business and continue his work to keep the Lenape traditions alive.