Accessibility links
Denied Treatment, U.K. Vet Stands Up for Liberty When 89-year-old Jack Tagg began losing his vision, Britain's National Health Service told him he would have to go blind in one eye before it would pay for treatment. In a public campaign, the World War II pilot took on the government — and won. 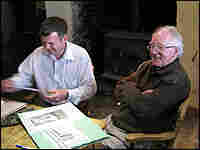 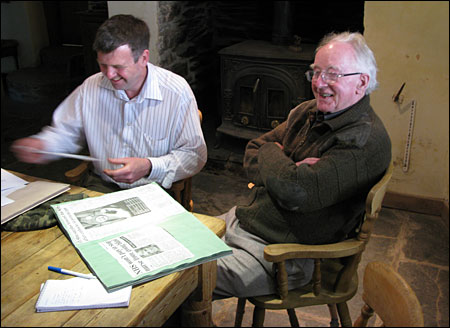 The United States spends on average $6,402 per person annually on medical care. Great Britain spends about half that — while providing health coverage for all residents and scoring higher than the U.S. on basic measures of good health, such as life expectancy. Compare the systems. 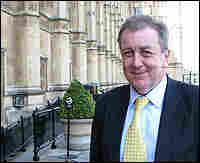 What's at stake in this fight is Jack Tagg's crystal-blue right eye, and his ability to enjoy his retirement and his lovely garden on a hill overlooking the southwest end of the English Channel.

On a gentle sunny day, the former World War II pilot sits out on his terrace in the seaside town of Torquay. He says he's feeling pretty good for a man of 89.

"As well as a fellow approaching middle age can feel," he laughs.

But back in January, he discovered the vision in his right eye was fading.

Tagg was worried. He loves to read, drive around the Devon countryside, and draw portraits off of photographs.

A specialist diagnosed him with age-related wet macular degeneration, a disease of the retina that can progress rapidly.

Tagg's specialist gave him three choices. He was told he could let nature take its course, and lose his sight in his right eye. Or he could pay for the dozen or so injections of a drug called Lucentis. The cost? At least $15,000.

Tagg's third option was to request that the National Health Service pay for the treatment.

"So naturally I said apply for me to receive funding," he says.

Like most people in Great Britain, Jack Tagg gets his care through a tax-funded system. Doctors are paid by the government. He doesn't see a bill so long as a local government board approves the treatment.

And most things are approved.

But Tagg's local health board rejected his request for NHS funding, saying they wouldn't pay the high price of Lucentis unless the disease hit his second eye.

Tagg was astonished. "I would have gone blind, unless we could have sold the house and got some money," he says.

The payment policy was set by a national board that considers both effectiveness and costs, the National Institute for Health and Clinical Excellence, or NICE. Tagg thought his local board was relying too heavily on cost, and not looking enough at benefit.

In Great Britain, limits are placed on treatments in order to provide a standard but high level of care for all residents through the National Health Service.

Tagg thought the system had gone too far.

"You tell me how much an eye is worth," he says.

"My friend the doctor had a brilliant idea," he said.

Dr. Martin Rankin, a general practitioner, used to live near Tagg in Torquay. When Rankin heard what was happening to Tagg, he decided to post the story on a doctors' Web discussion board, asking them to send checks for $10 to pay for Tagg's treatment.

Rankin, who now lives near Plymouth, said the local health board's decision didn't make sense. "Preserving binocular vision is important for people to preserve their mobility, to be able to accurately perceive depth," he says. "And that's important for everyone's safety, because Jack still climbs behind the wheel of his car."

So Tagg and Rankin took the hundreds of checks they had collected to Prime Minister Gordon Brown, delivering them to No. 10 Downing St.

"I thought, 'Should I knock timidly on the door, or would I do the job properly?' " Rankin recalls. "So I stepped up and grabbed the knocker and banged it as hard as I could, and there was a huge noise. The bang was just enormous, and it sort of echoed around Downing Street."

With reporters and news cameras all around, an official came out and took the checks.

Tagg and Rankin got plenty of coverage. They read from the headlines pasted in scrapbook: "Withholding Vital Treatment Beggars Belief." "Hero Is Told 'You Can't Have Drugs Until You Go Blind." "War Veteran Sees Red At NHS Policy." "Checks Of Shame To Be Handed To The Prime Minister."

The prime minister's office returned the checks, with a polite note of regret.

"We were like celebrities for a couple of weeks, weren't we, Jack?" says Rankin. "Jack was getting mail addressed to 'Jack, War Hero, Torquay.' And it would arrive!"

Torquay could now boast of being home to Agatha Christie, the British TV show Fawlty Towers and Jack Tagg.

But being a war hero wasn't enough for the local health board. A spokesperson refused to make anyone available to NPR to explain its action.

In London, at the House of Commons, Adrian Sanders is happy to talk. He's a member of Parliament, representing Torquay.

He remembers how Tagg showed up at an open house he holds regularly in his home district.

"He and his wife just turned up unannounced, as people do," Sanders says. "People come along and will tell me their problems. It can be anything, you name it."

Sanders says he doesn't get many complaints about the health service. So he took Tagg's concerns to several national health officials. He suspects they pressured the local health board. Not long after, the board offered to pay for Tagg's Lucentis treatments.

The local health board "was clearly embarrassed by the case," says Sanders.

"We were fighting for liberty," he says.

Dr. Rankin convinced Tagg to take the offer and continue to fight.

Tagg's story may seem like a failure of the British health system: An 89-year-old man had to take on the government to get the treatment he wanted. But Rankin doesn't see it that way at all.

"We see it as a wrong that's been righted," he says, and that ability to fight and win is proof the system works.

"It shows that we expect in this country everybody's needs to be met," Rankin says. "And when it doesn't happen, we're both outraged and astonished, and we protest and it gets fixed."

In fact, NICE now says local health boards shouldn't wait for the first eye to go blind, they should pay for Lucentis right away in situations where it's warranted. Officials at NICE say it wasn't a result of Tagg's activism, but a scheduled reconsideration of the data.

As for Tagg, the best way to see if the system worked for him is to climb into his little blue Renault for a ride through the green rolling hills around Torquay. He says after three treatments, he sees fine.

The car is dwarfed by the ancient 8-foot hedges that border the narrow lane. Tagg was not only a World War II pilot, he once ran a driving school. Still, his wife has only just started to feel comfortable driving with him since his treatment for blindness started.

"I've gotten over my fright now. And he's only blind in one eye," she jokes. "Someone suggested we should put a notice in the back, 'Child On Board.' I wanted to put one saying, 'Blind Driver At Wheel.'"

Back on his terrace, he sits back and looks out over his garden. He takes a bite of a lamb and butter sandwich, and savors his victory.

"We more than achieved our aims," he says. "We got free treatment, and we got a review of the entire machinery of the NHS."

If socialized medicine is going to work, he says, people have to stand up and fight.