Accessibility links
McCain Proposes Q&A Sessions With Congress Sen. John McCain recently floated the idea of instituting a "Yankee" version of the prime minister's questions period in Britain. During these sessions, the prime minister is bombarded by questions on a range of subjects from members of Parliament. Does the presidential hopeful realize what he might be getting into? 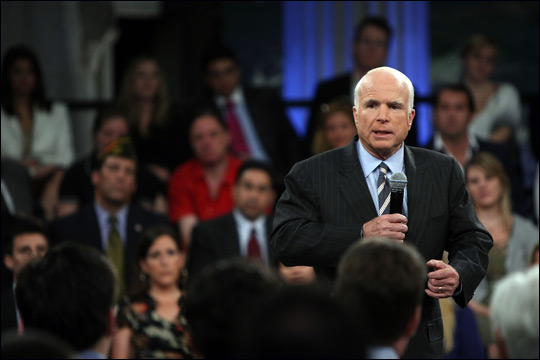 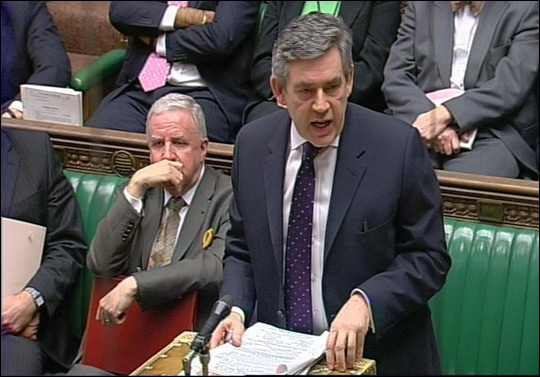 Prime Minister Gordon Brown speaks during a prime minister's questions period at the House of Commons in London.

Sen. John McCain (R-AZ) may not be comfortable giving big speeches, but he seems to enjoy give-and-take with reporters. And he has said that if he is elected, he wants to import the British custom of the prime minister's questions period.

During these sessions, the prime minister answers questions about a range of subjects from members of Parliament. In Minnesota last month, McCain talked about hosting similar sessions with Congress.

"The guys that are on my side stand up and tell me how great I am, but there'd be others that would have some very tough questions to ask," he said. "I'd like to see that."

But does McCain have any idea what he's in for?

Almost every Wednesday, the British prime minister goes to the House of Commons to field questions from lawmakers. Tony Blair was a master at it, but his successor, Gordon Brown, often has a tough time slogging through. The leader of the opposition blasts him each time — though, just like on the game show Jeopardy it's always in the form of a question.

Andrew Sparrow is a political correspondent for The Guardian. He says these question periods can make prime ministers nervous.

"They spend all morning with butterflies in their stomach. They have to devote several hours for preparing for all sorts of questions, and they go in there and they know it'll be live on the telly," he said. "And one silly step, one stupid answer, one silly expression even, can make them look daft in the eyes of the public and their colleagues."

Michael Howard knows this turf well, having led the Conservative Party from 2003 to 2005. He is a fan of McCain and says he's a big fan of prime minister's questions because it holds the government accountable.

"It ensures that, first of all, the prime minister knows what's going on — because he obviously has to prepare himself for what can, in certain circumstances, be quite an ordeal," he said. "And it gives members of Parliament the opportunity to hold the prime minister and government to account in a very visible and high-profile way."

But why aren't we as mean over here? Howard says it's because of the way the American government is structured.

Part of it seems like theater — and McCain says he enjoys watching the British go at each other on C-Span. But there are more substantive arguments for holding these sessions.

President Bush holds press conferences infrequently, and he gets brusque when he feels reporters are insufficiently respectful. It's also inconceivable that Bush might submit to questioning by Congress. The White House sometimes refuses even to let senior aides testify before congressional members.

"McCain does have a long history of supporting transparency in government, and a president's session would be a very significant reform in adding a degree of transparency that we've never had before," he said.

Turley's been advocating a Yankee version of prime minister's questions for quite some time.

"It frankly brings the prime minister down a notch," he said. "These sessions humanize a prime minister and remind him that he's a citizen and a temporary occupant of an office."

If implemented, McCain's proposal could stick. Tony Blair started American style press conferences in Britain more than a decade ago — and now no new prime minister would dare get rid of them.