Accessibility links
NOMO: The Sonic Maelstrom Of 'Ghost Rock' NOMO has a tiny name, but the group makes a big impression when it drives into town. NOMO is eight musicians from Ann Arbor, Mich., with dozens of instruments and just one van. On Ghost Rock, the octet proves that its jazz- and funk-inspired instrumental music is much more than a Fela Kuti tribute. 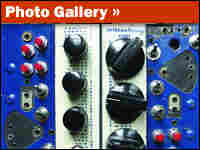 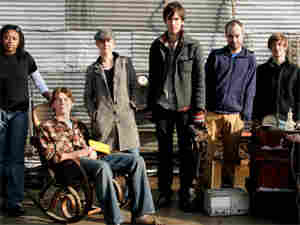 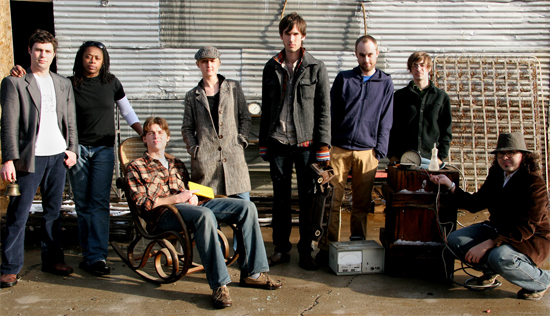 NOMO. The band has a tiny name, but it makes a big impression when it drives into town. NOMO is eight musicians from Ann Arbor, Mich., with dozens of instruments and just one van.

"It is quite amazing to see us pile out of the van. Most people don't believe we fit in there," bandleader Elliot Bergman says. "It's like Tetris with guitar amps. Russian nesting dolls — drums inside of each other."

In NOMO, Bergman is the founder, composer, manager, reed player, keyboardist, percussionist... and, he says, usually the van's driver.

"We have a process of elimination: how much beer, sleep; how many solos you took; how many people you talked to. It's an elaborate algorithm; one person emerges as the appropriate driver."

Bergman has also driven NOMO from its roots as a party band at the University of Michigan to where it is now, touring the U.S. with its third album, Ghost Rock.

In its first stage, NOMO celebrated the king of Afro-beat, Fela Kuti. The grooves were deep and repetitious, allowing for some serious improvisation. But like its peers in Antibalas and Femi Kuti's band, NOMO became so much more than just a Fela Kuti tribute act. Coming from various musical backgrounds and still digging into new music from all over the world, NOMO now offers traces of Motown, futuristic funk, avant-garde jazz and — as the album title boldly states — rock music. It's a sonic maelstrom, picking up on Miles Davis' electric period and taking it even further.