Accessibility links
Sportswriter Gets His Foot In The Door With Broncos Stefan Fatsis got the Denver Broncos to let him kick with the team and then wrote a book about the experience, titled A Few Seconds of Panic: A 5-Foot-8, 170-Pound, 43-Year-Old Sportswriter Plays in the NFL.

Listen
Sportswriter Gets His Foot In The Door With Broncos

Read an excerpt from A Few Seconds of Panic: A 5-Foot-8, 170-Pound, 43-Year-Old Sportswriter Plays in the NFL.

For many men, the dream of donning the uniform and taking the field as a pro football player is a tough one to shake. Most eventually come to accept they're not cut out to be a linebacker or quarterback.

But the fantasy of being a field-goal kicker is another matter. After all, how hard can it be to swing your leg and knock a football through a big fat hole in the goalposts?

Stefan Fatsis, a former Wall Street Journal reporter and current commentator for All Things Considered, persuaded the Denver Broncos to let him try. He got to wear No. 9, and he wrote a book about his experience: A Few Seconds of Panic: A 5-Foot-8, 170-Pound, 43-Year-Old Sportswriter Plays in the NFL.

And this week at Georgetown University, Fatsis showed NPR's Scott Simon that kicking a field goal is not an easy feat.

Fatsis says he got the Denver Broncos to let him kick simply by asking.

Broncos owner Pat Bowlen "thought about it for one second" and said yes, Fatsis says. "This is a guy who understands that the NFL is a $7 billion entertainment business and this might look favorably upon his franchise and upon the sport at the beginning of the 21st century — a way to memorialize the way the NFL is now."

So Fatsis spent a year working with a personal trainer and found a kicking coach in northern Virginia. He drilled for about five months — sometimes barefoot to learn proper technique — and by the end, he was kicking 35- and 40-yard field goals. It's hard to fathom just how far that really is, Fatsis says, unless you're on a football field 40 yards away from the goalposts.

Although the NFL wouldn't let him play in a regular game, Fatsis says he got to take the field at pre-season games.

But the first time Broncos coach Mike Shanahan called on him, he choked.

"I had never felt any pressure like that in my life," Fatsis says, adding, "there were more than 1,000 fans there that day, 90 players, the coaches. And my first kick was one of the worst kicks I'd ever made to that point — it went under the crossbar from 30 yards.

Afterward, he says, the players "all came up to me and said, 'Now you get it. Now you know what it's about.' And I think that made me part of the team."

This bond with the players gave him a window on a side of the sport that the public never gets to see — the often-low pay and the mental strain of performing under pressure and of knowing that the career of an average NFL player lasts about three years.

"It's trite to talk about the end of an athlete's dream, but watching it up close is poignant and players don't often admit it and they don't want to talk about it," Fatsis says. "Within the confines of the locker room, it's sort of taboo to really discuss your inner fears and your emotions. But I was able to get to them, and they trusted me and eagerly wanted to talk about how the NFL that they've experienced differs from the NFL that we read about and watch on television."

While Scott Simon confesses that he sometimes falls asleep pretending to be the quarterback of the Chicago Bears during the Super Bowl, Fatsis says he never dreamed about kicking a game-winning field goal.

"It is sort of a childhood dream, a fantasy, to wonder what it would be like. But I felt that I was close enough that it wasn't worth dreaming about — I wanted to actually perform, and I had a chance to actually perform," he says. "And for me, the visualization was doing it in front of these guys and succeeding so that they would know that I came through in the clutch for the team. I was certainly never a real NFL player, but when I ran onto the field dressed in a Denver Broncos uniform before pre-season games, I felt like one."

And Fatsis says he still has his uniform.

"When I'm done showing it off, it's going to be framed." 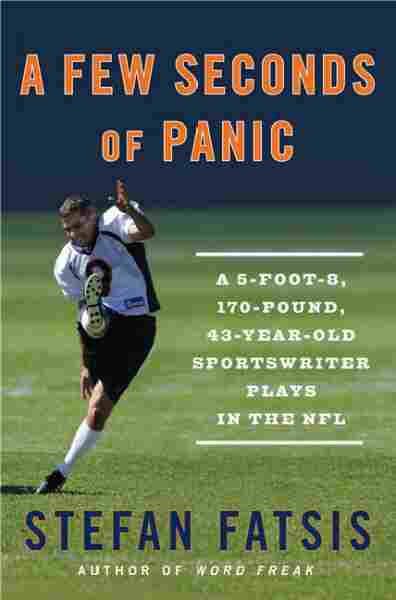 A Few Seconds of Panic