Accessibility links
Mapping The Mysteries Of The Brain's Two Halves The quest to understand what makes us us has long been one of humankind's great pursuits. Neuroscientist Michael Gazzaniga has made progress: He's the author of Human: The Science Behind What Makes Us Unique.

Listen
Mapping The Mysteries Of The Brain's Two Halves 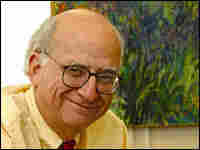 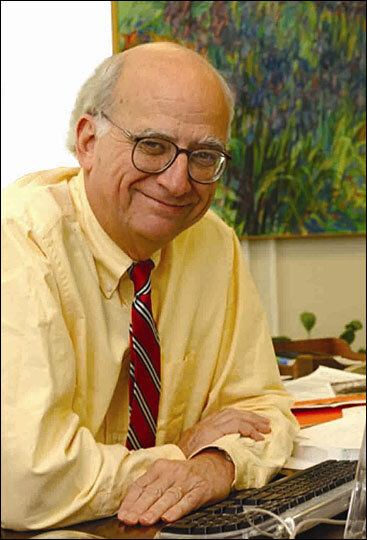 We humans have long wondered what separates us from the other animals — but neuroscientist Michael Gazzaniga may have given the topic more consideration than most.

Gazzaniga, a pioneer in what's called split-brain research, has just published Human: The Science Behind What Makes Us Unique. He talks to Terry Gross about his work, which involves investigating the varying functions of the left and right sides of our brains, and about how that research informs our understanding of the brain and human consciousness.

Gazzaniga has spent the past 45 years studying the functions of the left and right brain. He's director of the University of California–Santa Barbara's SAGE Center for the Study of the Mind. He also serves on the President's Council on Bioethics and is a member of the American Academy of Arts and Sciences.

In addition to Human, Gazzaniga is also the author of The Ethical Brain. 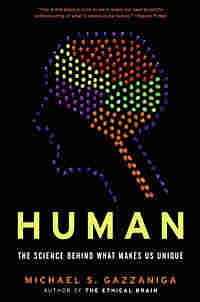 I always smile when I hear Garrison Keillor say, "Be well, do good work, and keep in touch." It is such a simple sentiment, yet so full of human complexity. Other apes don't have that sentiment. Think about it. Our species does like to wish people well, not harm. No one ever says, "Have a bad day" or "Do bad work," and keeping in touch is what the cell-phone industry has discovered all of us do, even when there is nothing going on.

There in one sentence Keillor captures humanness. A familiar cartoon with various captions makes its way around evolutionary biologists' circles. It shows an ape at one end of a line and then several intermediate early humans culminating in a tall human standing erect at the other end. We now know that the line isn't so direct, but the metaphor still works. We did evolve, and we are what we are through the forces of natural selection. And yet I would like to amend that cartoon. I see the human turning around with a knife in his hand and cutting his imaginary tether to the earlier versions, becoming liberated to do things no other animal comes close to doing.

We humans are special. All of us solve problems effortlessly and routinely. When we approach a screen door with our arms full of bags of groceries, we instantly know how to stick out our pinky and hook it around the door handle to open it. The human mind is so generative and so given to animation that we do things such as map agency (that is, we project intent) onto almost anything——our pets, our old shoes, our cars, our world, our gods. It is as if we don't want to be alone up here atthe top of the cognitive chain as the smartest things on earth. We want to see our dogs charm us and appeal to our emotions; we imagine that they too can have pity, love, hate, and all the rest. We are a big deal and we are a little scared about it.

Thousands of scientists and philosophers over hundreds of years have either recognized this uniqueness of ours or have denied it and looked for the antecedents of everything human in other animals. In recent years, clever scientists have found antecedents to all kinds of things that we had assumed were purely human constructions. We used to think that only humans had the ability to reflect on their own thoughts, which is called metacognition. Well, think again. Two psychologists at the University of Georgia have shown that rats also have this ability. It turns out that rats know what they don't know. Does that mean we should do away with our rat traps? I don't think so.

Everywhere I look I see tidbits of differences, and one can always say a particular tidbit can be found in others aspects of biological life. Ralph Greenspan, a very talented neuroscientist and geneticist at the Neuroscience Institute in La Jolla, California, studies, of all things, sleep in the fruit fly.

Someone had asked him at lunch one day, "Do flies sleep?" He quipped, "I don't know and I don't care." But then he got to thinking about it and realized that maybe he could learn something about the mysterious process of sleep, which has eluded understanding. The short version of this story is that flies do sleep, just as we do. More important, flies express the same genes during sleeping and waking hours that we do. Indeed, Greenspan's current research suggests that even protozoans sleep. Good grief!

The point is that most human activity can be related to antecedents in other animals. But to be swept away by such a fact is to miss the point of human experience. In the following chapters, we will comb through data about our brains, our minds, our social world, our feelings, our artistic endeavors, our capacity to confer agency, our consciousness, and our growing knowledge that our brain parts can be replaced with silicon parts. From this jaunt, one clear fact emerges. Although we are made up of the same chemicals, with the same physiological reactions, we are very different from other animals. Just as gases can become liquids, which can become solids, phase shifts occur in evolution, shifts so large in their implications that it becomes almost impossible to think of them as having the same components. A foggy mist is made up of the same stuff as an iceberg. In a complex relationship with the environment, very similar substances with the same chemical structure can become quite different in their reality and form.

Indeed, I have decided that something like a phase shift has occurred in becoming human. There simply is no one thing that will ever account for our spectacular abilities, our aspirations, and our capacity to travel mentally in time to the almost infinite world beyond our present existence. Even though we have all of these connections with the biologic world from which we came, and we have in some instances similar mental structures, we are hugely different. While most of our genes and brain architecture are held in common with animals, there are always differences to be found. And while we can use lathes to mill fine jewelry, and chimpanzees can use stones to crack open nuts, the differences are light-years apart. And while the family dog may appear empathetic, no pet understands the difference between sorrow and pity.

A phase shift occurred, and it occurred as the consequence of many things changing in our brains and minds. This book is the story of our uniqueness and how we got here. Personally, I love our species, and always have. I have never found it necessary to lessen our success and domination of this universe. So let us start the journey of understanding why humans are special, and let's have some fun doing it. 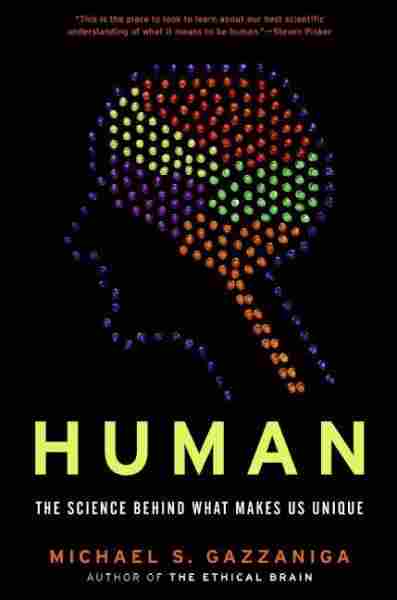