Live From The Newport Jazz Festival

Live From The Newport Jazz Festival

Now Over: Our broadcast from the JVC Jazz Festival Newport has finished. Check the Newport Jazz Festival series for archived audio from past concerts. 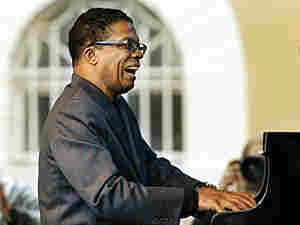 Creative pairings of top-flight artists once again fill the program at the JVC Jazz Festival Newport. Fresh off his surprising Grammy win for Album of the Year, veteran pianist Herbie Hancock will headline a lineup featuring such all-star collaborations as Dave Holland with Gonzalo Rubalcaba, Chris Potter and Eric Harland. NPR Music and WBGO will webcast performances from these groups and more, live from Newport on the weekend of Aug. 9-10.

Held every summer for 55 years running, the JVC Jazz Festival Newport is among the events for jazz enthusiasts worldwide. In 1954, nightclub owner and pianist George Wein created the "First American Jazz Festival" in Newport, R.I., with the assistance and financial backing of Elaine Lorillard. Throughout the half-century that followed, Newport attracted virtually all the top names in jazz, and became known as a breeding ground for new talent. The annual event is now known as the "grandfather" of all jazz festivals.