Accessibility links
The FBI On The Silver Screen Today marks the 100th anniversary of the FBI. The agency has been a frequent source of inspiration for Hollywood over the years. Host Andrea Seabrook presents a few of the more memorable film representations of the bureau.

Listen
The FBI On The Silver Screen

Today marks the 100th anniversary of the FBI. The agency has been a frequent source of inspiration for Hollywood over the years. Host Andrea Seabrook presents a few of the more memorable film representations of the bureau.

Welcome back to ALL THINGS CONSIDERED from NPR News. I'm Andrea Seabrook.

SEABROOK: One hundred years ago today Attorney General Charles Bonaparte recruited a handful of investigators from the Secret Service. They would form a new branch of the Justice Department - the Federal Bureau of Investigation was born.

Unidentified Man #1: Like many, another success story, this one had humble beginnings.

SEABROOK: It's a story that really inspired Hollywood.

Unidentified Man #1: I'm going to take you back to those days and show you a motion picture about a man named Brick Davis who was in the bureau. It's the daddy of all FBI pictures. The first one to call as G-Men.

SEABROOK: "'G' Men" have been a staple in Hollywood ever since there was a Hollywood. So, here are a few of our favorite FBI flicks.

Unidentified Man #2: I heard something about you today, lawyer.

Unidentified Man #3: You did? What?

Unidentified Man #2: You're gonna be dumped in a ditch, stool pigeon. Remember to keep your tin badge in Washington. If you come around here sticking your puss in our affairs you'll get a belly full of this. Now, beat it.

Ms. LAURA LINNEY (Actor): (As Kate Burroughs) You're being tasked to headquarters where you'll be riding the desk of an agent named Robert Hanssen. He's a traitor, Eric. Started spying for the Russians, we think, in 1985.

Mr. Ryan Phillippe (Actor): (As Eric O'Neill) What if he's smarter than I am?

Ms. LAURA LINNEY (Actor): (As Kate Burroughs) He was smarter than all.

(Soundbite of movie "Silence of the Lambs")

Mr. ANTHONY HOPKINS (Actor): (As Hannibal Lechter) You're one of Jack Crawford's, aren't you?

Ms. FOSTER: (As Clarice Starling) I'm still in training at the Academy.

Mr. HOPKINS: (As Hannibal Lechter) Jack Crawford sent a trainee to me.

(Soundbite of movie "Catch Me If You Can")

Mr. TOM HANKS (Actor): (As Carl Hanratty) You're scared because I'm getting close. I know you - you rented that car in Shreveport and you stayed in that hotel in Lake Charles. You want to run, be my guest.

SEABROOK: Just a few of the great FBI moments in movie history. We heard from "'G' Men," "Point Break," "Breach," "Silence of the Lambs" and "Catch Me If You Can." What are your favorite FBI movies? Visit NPR.org and click Contact Us to send us a note with FBI Movie in the subject line. 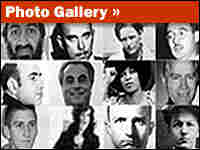 Gallery: A Who's Who From The FBI's Most Wanted List 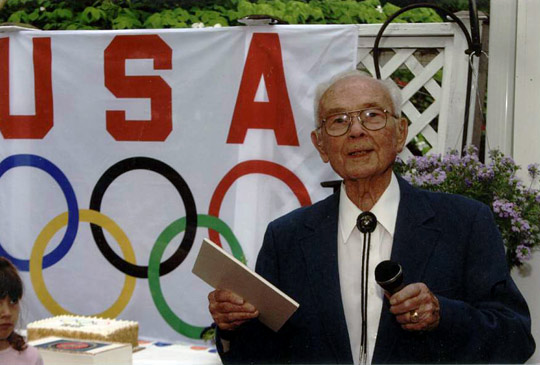 Courtesy of the Walsh family 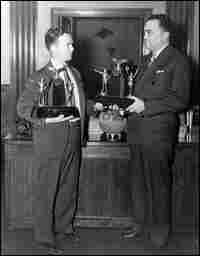 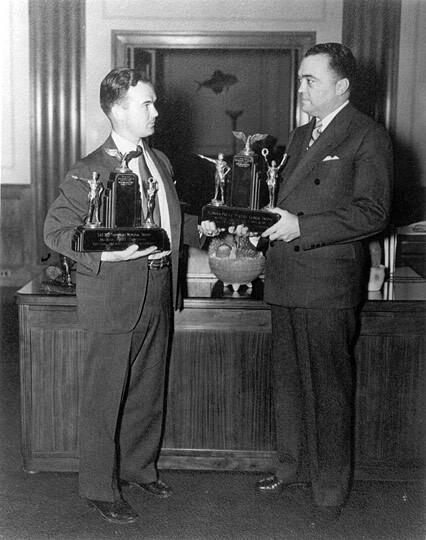 Courtesy of the Walsh family

The FBI turns 100 on Saturday. That makes former agent Walter Walsh one year older than his former employer.

Walsh was an agent when newsreels at the Saturday double feature were full of the drama, thrills and action of G-men tracking down criminals like John Dillinger, Ma Barker and the Brady Gang.

He joined the FBI in 1934, just a decade after J. Edgar Hoover took the helm and the bureau began to take the same kind of shape we see today. The G-men — or government men — were behind some of the most celebrated cases of the time, and Walsh thought he could be part of that. He signed up fresh out of Rutgers Law School.

"I thought to myself, this might be a good outfit to tie up with," Walsh says. "I am not trying to pin medals on myself, but the people in the FBI knew that I was very handy with firearms."

Actually, he was more than just handy.

Walsh's living room is filled with shooting trophies and medals from the Marine Corps and the FBI. He said he started out shooting clothespins off his aunt's clothesline with a BB gun, something she used to yell at him about. But he was good at it — so good he ended up on the 1948 Olympic shooting team, the first Olympics after World War II. Walsh was also commander of the Marine Corps' marksmanship training for years.

Because he could shoot, the FBI assigned him to some of its biggest cases.

Walsh was there when the FBI arrested Doc Barker — Ma Barker's lawless son — in Chicago in 1935. The FBI had gotten a tip about where Doc Barker was hiding, and Walsh was with the team on the stakeout.

"The place had been under surveillance," Walsh said in a recent interview with NPR. "We may not have been thoroughly convinced it was the place to be, but when this gal came out ... in this red fox fur coat, we knew we were in the right place."

The FBI arrested Barker then and there.

In the interview, Walsh had trouble recalling the details at first. Then he brightened as his nephew, Chip Wells, jogged his memory.

"I remember having a shootout with somebody — in a sporting goods store, I believe it was."

His nephew reminded him it was in Bangor. "That's it — in bang, bang, Bangor, Maine," Walsh said with a laugh.

Brady and his gang had committed more than 200 robberies and four murders and had escaped from prison. They had figured that Bangor was so remote the FBI would never think of looking for them there. As Walsh recalled the day, little details began to click into place.

So Brady and his gang said they would come back for their guns in a couple of days. The clerk called the police, who brought in the FBI. The shooting started almost as soon as Brady came through the door.

"The only thing I can remember is shooting through this plate-glass door," Walsh said. "And I must have recognized him. I didn't just shoot to shoot a plate glass door...."

Brady died that day on Central Street. A brass plaque in the sidewalk commemorates the event more than 70 years ago.

On The Straight And Narrow Path

It is hard to believe Walsh is 101. Except for his hearing and some small lapses in memory, he seems like a much younger man.

He has almost a full head of hair. He lives alone. He grouses that his family won't let him drive his car anymore. And while he needs occasional prodding to remember events that happened a lifetime ago, he's sharp and funny and there is a twinkle in his eye.

He is so vigorous, you can't help but ask if he has a secret that got him past that century mark.

"To start with, you have to be lucky," Walsh says. "Then, if you listen to your parents and follow the path of the straight and narrow, then I think God has mercy on you — permits you to live. That's about it. It has worked very well for me for a long time."