Accessibility links
The Day A Bomber Hit The Empire State Building On July 28, 1945, a B-25 bomber hit the Empire State building and exploded. The crash killed three people in the plane and 11 people who worked inside the building. Two women who survived describe the horror.

Listen
The Day A Bomber Hit The Empire State Building 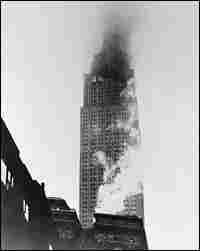 The Empire State Building was enveloped in smoke after it was rammed by a U.S. Army B-25 bomber on July 28, 1945. Bettmann/Corbis hide caption 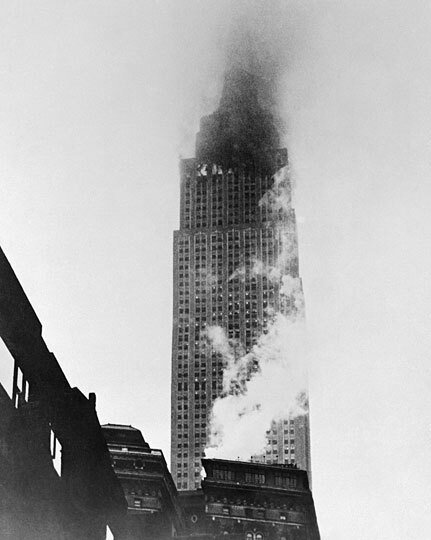 At the time the B-25 bomber slammed into the Empire State Building, an engineer for the American Society of Civil Engineers happened to be dictating a letter onto a recording device. He captured the sounds of the crash. 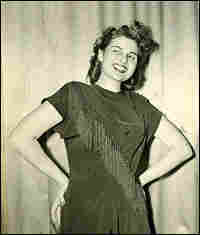 Gloria Pall, pictured here in 1945, worked on the 56th floor of the Empire State Building when it was hit by a B-25 bomber. Courtesy Gloria Pall hide caption 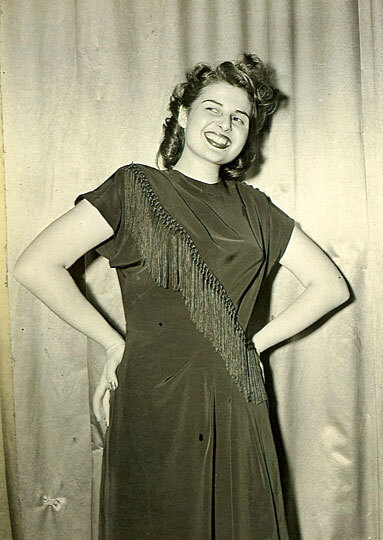 Gloria Pall, pictured here in 1945, worked on the 56th floor of the Empire State Building when it was hit by a B-25 bomber.

On July 28, 1945, residents of New York City were horrified when an airplane crashed into the Empire State Building, leaving 14 dead. Though the events of that day have largely faded from public memory, they remain etched in the minds of those who experienced them.

It was the waning days of World War II, and a B-25 bomber was flying a routine mission ferrying servicemen from Massachusetts to New York City's LaGuardia Airport. The day was foggy. Capt. William F. Smith, who had led some of the most dangerous missions in WWII in Europe, was the pilot.

When Smith arrived in the New York area, the weather was getting worse. He called LaGuardia and requested a clearance to land. With nearly zero visibility, the tower suggested that Smith not land.

"Smith said, 'Thank you very much' and signed off," says Arthur Weingarten, who wrote The Sky Is Falling, about what happened that day. "He ignored it … So he started to make a little bit of a turn that brought him over midtown Manhattan, and as he straightened out, the clouds broke up enough for him to realize he was flying among skyscrapers."

The bomber crashed into the Empire State Building, the tallest building in the world at the time. The collision killed Smith, two others on the plane and 11 people who worked inside the building.

Therese Fortier Willig, who was 20 years old at the time, worked for the Catholic Relief Services on the 79th floor.

"In the other side of the office, all I could see was flames," Willig said. "Mr. Fountain was walking through the office when the plane hit the building and he was on fire -- I mean, his clothes were on fire, his head was on fire. Six of us managed to get into this one office that seemed to be untouched by the fire and close the door before it engulfed us. There was no doubt that the other people must have been killed."

Gloria Pall worked for the United Service Organization's headquarters on the 56th floor.

"I was at the file cabinet and all of a sudden the building felt like it was just going to topple over," Pall said. "It threw me across the room, and I landed against the wall. People were screaming and looking at each other. We didn't know what to do. We didn't know if it was a bomb or what happened. It was terrifying."

The fire trapped hundreds of office workers, including Willig and Pall. There was panic. A man named Paul Dearing jumped.

When the plane hit, parts of the engine flew ahead and severed the lifting cables of two elevators on the 79th floor, according to Weingarten. The elevators crashed to the subbasement. In one of the elevators was a 19-year-old elevator operator named Betty Lou Oliver. She broke her pelvis, back and neck -- but she survived.

Willig recalled what she was thinking as the fire burned on the 79th floor. "It was a very small universe at that point. You're stuck there in an island, with fire all around us," Willig said. "A couple of the women had passed out from the smoke, and I had a handkerchief in my pocket, and so I used that to cover my nose and my mouth to protect me from the fumes. And somebody had opened the window. And I'm sitting there, and I thought about my rings. And I thought I won't be around to have them, someone else might as well have use out of them. So I took them off my fingers and threw them out the window."

Willig said a man on the street below saw the office workers trapped in the building and signaled to them to stay where they were.

"I guess he was trying to give us some solace -- to say don't worry," Willig said. "And that was a connection with the rest of the world. We all felt a little better to know that someone knew we were there."

"And all of a sudden here were firemen and they're coming to rescue us, all dressed up in their raincoats, whatever they wear," Willig said. "It was just wonderful. We climbed out through the broken glass. I was just grateful to be alive."

Pall said she didn't know what happened until she was out of the building.

"I saw crowds of people just looking at each other and I said, 'What happened? What happened?' " Pall said. "He pointed up to the 79th floor and I looked up and saw the tail of a B-25 bomber."

Eight months after the crash, the U.S. government offered money to families of the victims. Some accepted, but others initiated a lawsuit that resulted in landmark legislation. The Federal Tort Claims Act of 1946, for the first time, gave American citizens the right to sue the federal government.