A Tale of Two Symphonies 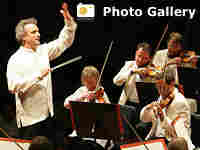 See a Photo Gallery of the Mostly Mozart Festival 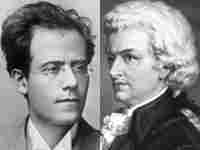 Although they were born a hundred years apart, both Mahler and Mozart had a knack for writing powerful music under emotional pressure. Getty Images hide caption 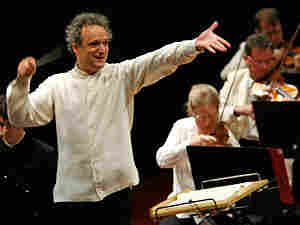 Although the two Austrian composers were born nearly 100 years apart, they shared a knack for composing transcendent music under extreme emotional pressure.

Toward the end of his life, in the summer of 1788, times were rough for Mozart. He was forced to move to a cheaper apartment in the Viennese suburbs, his six-month-old daughter died, and his wife was ill. Mozart, again, had to grovel for a loan. He turned to his friend, Michael Puchberg, a Viennese banker who was willing to lend hard cash.

"I beg you to lend me at least a couple of hundred gulden until tomorrow," Mozart wrote to Puchberg, "because my landlord was pressing me so hard that I had to pay him all at once... and that has brought my finances into complete disarray." In another letter, a few days later, Mozart complains about "black thoughts, which I have to chase away forcibly."

It's tricky to translate Mozart's gulden into today's dollars. But a rough estimate would show that, over a three-year period, Puchberg sent Mozart around $45,000.

Mozart might have been cash-poor that summer, but he wasn't musically poor. He wrote his three final symphonies in June, July and August. Somehow, while his mind was reeling with "black thoughts" — and while in the midst of his humiliating pleas for money — he wrote some of his proudest, most dignified music.

Mozart completed his Symphony No. 40 on July 25, 1788. Some of his personal pain can be detected from the outset. But the way in which Mozart combines sheer musical beauty with an overall sense of urgency makes him a rebel, in the mind of pianist and musical theorist Charles Rosen.

"In all of Mozart's supreme expressions of suffering and terror, there is something shockingly voluptuous," Rosen says. "Nor does this detract from its power or effectiveness: The grief and sensuality strengthen each other. ... In his corruption of sentimental values, Mozart is a subversive artist."

"He was pushing so far the possibilities, and experimenting in many different ways," Langrée says. "It is fascinating to discover."

Gustav Mahler was always worried about death — nothing new there. In his massive symphonies, he struggled to come to terms with humankind's biggest questions of life, death, nature and religion.

Except that while Mahler wrote Das Lied von der Erde ("The Song of the Earth"), death really was starring him in the face. His daughter had just died, and he was diagnosed with an incurable heart ailment.

Das Lied von der Erde is a meditative, expansive farewell in the form of a symphony with six songs. It's the first of three works in Mahler's so-called "farewell trilogy" — his final three works, including the Ninth Symphony and the unfinished Tenth.

Mahler found the texts for Das Lied's songs in a book titled The Chinese Flute, a volume of ancient Chinese poems in German translations. The songs are titled "The Drinking Song of Earth's Misery," "The Lonely Soul in Autumn," "Of Youth," "Of Beauty," "The Drunkard in Spring" and "The Farewell."

Mahler was superstitious about Das Lied while composing it in 1908. Although he thought of it as a symphony, he refused to call the new work "Symphony No. 9" because he was convinced that any composer who tried to top Beethoven by writing more than nine symphonies was doomed.

According to conductor Bruno Walter, who premiered the work in Munich in November 1911, "I was profoundly moved by that uniquely passionate, bitter, yet resigned and benedictory sound of farewell and departure, that last confession of one upon whom rested the finger of death."

Slimming Down with Schoenberg

Tonight's Mostly Mozart performance of Das Lied von der Erde is heard in what conductor Langrée calls "a bonsai version," a scaled-down rendition envisioned by Arnold Schoenberg. As one who felt a deep connection with Mahler's music, Schoenberg began arranging the work for chamber orchestra, intending it to be played by a private Viennese society of musicians that he had founded. The transcription was never completed, but in 1983, musicologist Rainer Riehn took up where Schoenberg left off.

The reduced-calorie result gains in transparency and intimacy, while retaining the intense mood of the original. Schoenberg and Riehn's arrangement calls for only 14 players, as opposed to Mahler's orchestra of more than a hundred. In its scaled-down version, Mahler's melodies fall more delicately on the ear, while the harmonies take on a surprisingly subtle palette of colors.