Accessibility links
Beer-Drinking Tree Shrews: Sober As Judges Compared with humans, tree shrews that drink a beerlike palm nectar should have a 36 percent chance of being drunk on any given night. But that's not the case, researchers say — somehow, the animals have developed a built-in tolerance. 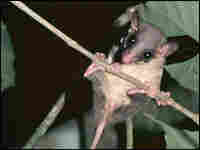 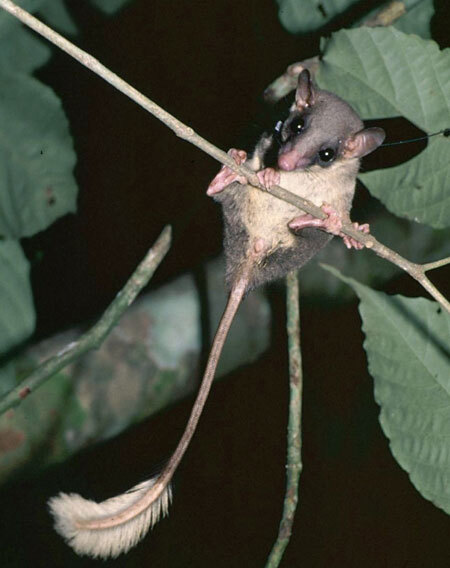 A pentail tree shrew in the wild, wearing a small radio collar.

In the rain forest of Malaysia, scientists have found a small mammal, closely related to primates, whose major source of food is a type of beer.

It's believed to be the only animal other than humans that chronically consumes alcohol. But this animal never appears drunk, according to a study in the Proceedings of the National Academy of Sciences.

This little critter, the pentail tree shrew, is about 4 inches long; it weighs just a few ounces.

"It looks like a mix between a squirrel and a mouse," says Frank Weins, a biologist from Bayreuth University in Germany, who lived in western Malaysia studying these tiny mammals.

"They have this very strange naked tail. The tip looks like a bird feather."

With big eyes that face forward, and tiny grasping fingers and toes, the tree shrew is an evolutionary cousin of primates. They're nocturnal and spend most nights out in the jungle drinking nectar.

"They walk up and down the cluster of flowers and lick off nectar from the different flower buds," Weins says.

But they have one favorite food source: the bertam palm, whose flowers have a very strong and distinctive smell. "They smell like a brewery," Weins says.

In fact, the flower buds function as brewing chambers — they have been invaded by previously unknown species of yeast, which ferment the nectar into frothy alcohol.

"The maximum alcohol concentration that we recorded was 3.8 percent," Weins says. "That's in the range of a beer."

And the tree shrews spend several hours each night drinking this palm beer. Weins calculates that the tree shrew is imbibing what would be the human equivalent of nine glasses of wine an evening. However, the pentail tree shrew shows no signs of being drunk.

"They move normally on the palms when they go for the nectar," Weins says. "There's no sign of motor incoordination or other odd behaviors. They just move as efficiently as they would on any other tree."

Weins says there are no pentail tree shrews in captivity, so it hasn't been possible to do lab tests to detect intoxication.

But with jungle predators always lurking, Weins says, it would be very risky for a little mammal in the wild to be tipsy or drunk.

And that leads Weins to believe that the tree shrew probably has a specially evolved metabolism that detoxifies the alcohol quickly, keeping the alcohol concentration in the brain very low.

As a result, the tree shrew is able to detoxify alcohol more efficiently than its primate cousins: humans.