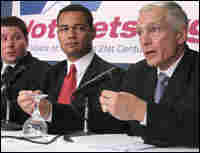 Click here to see ads funded by this organization on the Secret Money Project blog.

Formed in 2006 by veterans of the Iraq war, VoteVets opposes the Bush administration's handling of the war and backs mostly Democratic veterans running for Congress.

The organization's hard-hitting TV ads were credited with helping defeat several Republican incumbents in the 2006 midterm elections. The ads accused Republican senators of not providing soldiers with the best body armor. These were some of the most talked-about ads of 2006.

VoteVets Action Fund is a 501(c)(4) and VoteVets.org PAC is a political action committee. Its leader, Jon Soltz, became involved in politics by volunteering for Massachusetts Sen. John Kerry's presidential bid in 2004 after Soltz returned from fighting in Iraq.

Will Evans is a reporter for the Center for Investigative Reporting, NPR's partner in the Secret Money Project.