Accessibility links
Will Beijing's Efforts Clear Air For Olympics? China is considering further measures to reduce pollution in Beijing, with less than two weeks to go before the start of the Olympic Games. Even after authorities took half the cars off the street, the city is still shrouded in smog.

China is considering further measures to reduce pollution in Beijing, with less than two weeks to go before the start of the Olympic Games. Even after authorities took half the cars off the street, the city is still shrouded in smog.

The Olympics opening ceremony is just one week from Friday. And we're joined now by Anthony Kuhn, as we just heard Beijing correspondent for NPR, to talk about the latest on the city's plan to combat pollution.

MONTAGNE: And Anthony, I am looking at Good Morning newspaper's photographs and showing in one case an Olympic stadium shrouded in thick, gray smog. Now, that was yesterday. I gather there's been a little rain today.

KUHN: Yes. The rain or the wind are things that could save them in the end. And we've just had a few days in which the air quality was not up to Beijing's standards, not up to World Health Organization standards. It was very smoggy. And the government said that if the air quality is not up to standard two days before the games, they could put into effect a Plan B, and that could mean even more restrictions on private car use. What's been suggested is taking 90 percent of the cars off the roads. And that would be extremely drastic. But whether or not it will work we'll have to see.

MONTAGNE: So Plan B standing for drastic pollution controls?

KUHN: That's correct. I mean, you can imagine if only 10 percent of the cars are allowed onto the roads, that means, for example, if your license plates number ends in an 8, you could only drive on the eighth of the month, the 18th or the 28th of the month. So basically people would only be able to drive every 10 days. And that's very drastic.

MONTAGNE: Now, China's government insists the weather is a big factor in this pollution. Is that just an excuse?

KUHN: It is definitely a factor. And anyone who lives in Beijing can tell you that, well, July and August in Beijing are soupy and muggy and hazy and visibility is poor. But that does not, you know, that doesn't take away from the fact that there is very serious pollution. Now, Beijing weather forecasts are already predicting that for the games they will have good weather, that this hazy spell will break right after what the Chinese say is the first day of the fall, according to the lunar calendar, which according to statistics usually means clear weather. So it could save them or it could break them on the first day of the games.

MONTAGNE: Now, you know, you just talked about Plan B. But when you add it all up, is there any way for the Chinese government to absolutely deliver the air quality that it's promised for years for these games?

KUHN: It's very hard to say whether they can give, you know, acceptable air quality on every day. And you know, while the government points out that they really have done a lot, including putting in solar-powered street lamps and natural gas-powered buses and five new subway lines, the main thing they have not done is to restrict private car use. And so these temporary measures we're seeing now may just not be adequate. We're talking about a city of 16 million people and 3 million cars. And you know, it's very seldom you see a city this size with no restrictions on cars driving into the city center, no congestion charges, no bridge and road tolls, none of that. And so only now they're finding that it's very hard to clean up what's been in the making for many, many years.

MONTAGNE: Well, just briefly, we only have a few seconds. I gather that Beijing's talking about seeding the clouds to make more rain. Yes? No?

KUHN: Yes. If they have to they will seed the clouds and try and bring the rain down before it comes down on the ceremony. But there are a lot of people who are skeptic about man's ability to manipulate nature that way.

MONTAGNE: Anthony, thanks very much.

MONTAGNE: NPR's Anthony Kuhn speaking to us from Beijing. 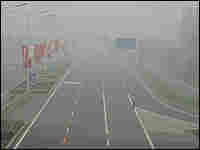 Smog shrouded a road to an Olympic venue in Beijing, China, on July 27, 2008. Pollution levels in Beijing topped the scale that day, just 12 days before the Olympics. Guang Niu/Getty Images hide caption 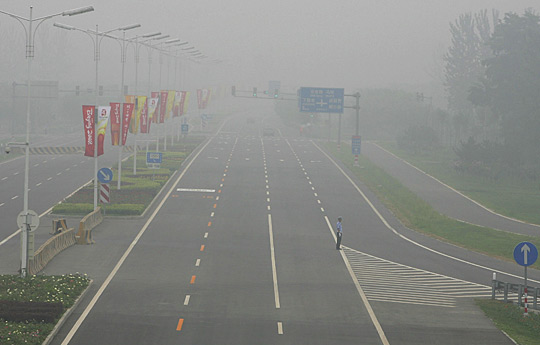 Smog shrouded a road to an Olympic venue in Beijing, China, on July 27, 2008. Pollution levels in Beijing topped the scale that day, just 12 days before the Olympics.

Officials have taken a number of specific and drastic measures to clear the air, says Sun Weide, spokesman for the Beijing Organizing Committee for the Olympic Games. These include: 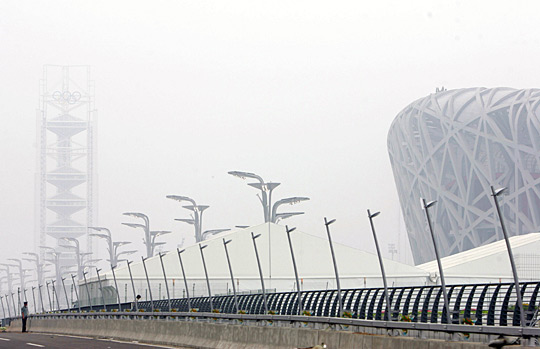 A policeman stands guard outside the National Stadium on July 11, 2008, in Beijing, China. The city continues to record high pollution levels.

American triathlete Jarrod Shoemaker already knows what it is like to try to compete in a demanding endurance sport while breathing some of the world's worst air.

Shoemaker swam, biked and ran the Olympic triathlon course in Beijing for both training and competition in each of the last three years. The smog was especially difficult in the last two years, he says.

"You can really feel the particulate stuff getting into your lungs," Shoemaker says. "After the race, when we tried to talk or laugh or cough, it was pretty tough. You could feel it in your lungs. There was a burning."

Shoemaker says it was even challenging to simply stand on the sidelines while his teammates raced in the women's event.

"Trying to cheer was almost impossible, because we just couldn't take deep breaths," he says.

Most Athletes Not Affected

The Medical Commission of the International Olympic Committee says most athletes will not have trouble with Beijing's bad air, with the exception of endurance athletes like Shoemaker. His event requires almost two hours of intense physical strain.

"There may be some risk for outdoor events that include minimum one-hour continuous physical efforts at high level," the IOC commission reported in March.

That includes sports such as the triathlon, road cycling, mountain biking, race walking, and the swimming and running marathons.

"It's going to be the toughest on those athletes, because they're going to be out there breathing hard for the longest amount of time," says Dr. Bob Sallis, a sports medicine physician and past president of the American College of Sports Medicine.

"It's going to have its biggest effect on those with an underlying lung disease, like asthma, or those who have allergic rhinitis that would be triggered by the smoggy air," Sallis says. "Certainly, those [athletes] are going to be at a disadvantage. And that's just going to be a fact of life."

Triathlete Julie Ertel has both asthma and allergies, "so I'm just trying to take inventory of when that gets to be bad and when that is fairly good," she says. "I've tried my different asthma medicines and my different allergy medicines, and I'm trying to find the perfect combination that helps me breathe the best."

That is a tricky calculation, because some of those medications could contain performance-enhancing substances banned by the IOC. Asthmatic athletes must apply for waivers for the medicines they need so they don't run afoul of anti-doping rules.

Chinese authorities are working very hard to make sure air quality is acceptable during the Olympics. They spent $10 billion on pollution controls since Beijing was named Olympics host in 2001, according to Jeff Ruffolo, a media consultant for the Beijing Organizing Committee for the Olympic Games.

"I think scientifically we've done everything possible and will continue up until games time and through games time to make it the best possible for athletes and visitors," Ruffolo says.

Beijing Organizing Committee spokesman Sun Weide says officials have taken drastic measures, such as relocating factories and restricting the number of vehicles on the roads to clear the air.

"We are confident that because of those extra measures, the air quality will be good for the athletes during the games time," Sun says.

Some anti-pollution measures were invoked in recent weeks, and Ruffolo says the effects were immediate. Two days after some of the strictest measures were enforced, Ruffolo reported "two days of rather impressive blue sky. ... It's been beautiful outside, and you just take it one day at a time."

Blue skies are not common in Beijing, so we asked NPR Beijing Correspondent Anthony Kuhn to take a look for himself.

"There has definitely been an improvement in the air quality," Kuhn says, but he noted that "blue sky" is a relative term in Beijing.

"The Beijing government calls days here with good air quality 'blue sky days,' " Kuhn says. "Sometimes it's hard to tell. Looking at the sky today, there's only a suggestion of blue peeking through the haze and the clouds."

The organizing committee and the IOC are monitoring air quality constantly. They have contingency plans for delaying endurance events if air quality isn't acceptable when competition is scheduled.

Athletes and coaches have been trying to figure out how to minimize the smog's impact on performance. Some teams are limiting exposure in advance of competition by avoiding Beijing and training elsewhere. U.S. athletes have been offered breathing masks that filter out some particulates. The masks are not intended for competition. They could actually hinder performance as much as bad air. Athletes would wear them outside of competition and training, again to minimize exposure.

"The benefits [of the masks] are as much psychological as they are physiological," says Darryl Seibel, spokesman for the U.S. Olympic Committee. "Whether or not these devices are necessary is something we won't know until we're actually in Beijing at the games. We're optimistic that the air will be of a suitable standard, [but] we are prepared in the event that we encounter conditions that are somewhat less than ideal."

"I think of [pollution] as one of many factors that I need to deal with during the race," says Philip Dunn, who will compete in the 50-km race walk, the longest track and field event in the Olympics. He plans to avoid Beijing before his event, except briefly for the opening ceremonies. But, he says, there isn't much else he can do.

In fact, some endurance athletes may use cooling vests before competition so they start their events refreshed. Proper nutrition and hydration can also help combat the effects of Beijing's stifling humidity and blistering heat. But there are no magic bullets for smog, except rain, which temporarily clears the air. Chinese officials have an extensive cloud seeding program under way to try to induce rain.

Dunn actually sees a potential advantage in the polluted air.

"I think of it as an equalizer," he says. "I think a lot of the athletes may be physically or psychologically affected more than I would be, and I tend to do better in races where the conditions are tougher."