Accessibility links
The Art Of Sandwich-Making At its simplest, a sandwich is bread enclosing a filling. It also can be a perfectly balanced meal, with protein, vegetable, carbohydrate, dairy and even fruit — and can reflect the culture of a city or an entire nation. And it can be eaten — as its creator intended — by hand.

Hear an interview with Kevin Weeks

The Art Of Sandwich-Making

The Art Of Sandwich-Making

Hear an interview with Kevin Weeks 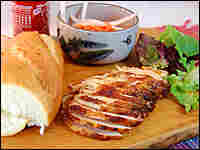 Like good sandwiches the world over, the Banh Mi starts with a hunk of quality bread. Then pile on sliced meat, leafy greens, pickled radish and hot chili garlic sauce for a Vietnamese-inspired meal. Kevin Weeks for NPR hide caption 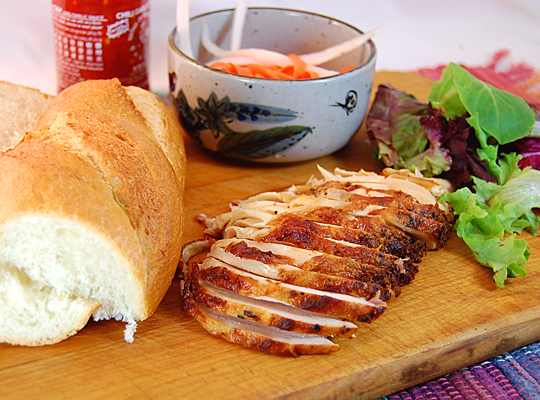 Like good sandwiches the world over, the Banh Mi starts with a hunk of quality bread. Then pile on sliced meat, leafy greens, pickled radish and hot chili garlic sauce for a Vietnamese-inspired meal.

Get recipes for Muffaletta with Olive Mix, Cubano, Banh Mi and Shawarma sandwiches.

In theory, a perfectly balanced meal includes some protein, but not too much; a vegetable or two; some fruit and a carbohydrate. Such a meal also should balance tastes — savory, a little sour or bitter maybe, perhaps some sweet and salt — and textures, from chewy to succulent to crisp. Let's go a step further and propose that this meal also can conveniently be eaten while playing cards.

According to popular legend, the sandwich was invented by John Montagu, the fourth Earl of Sandwich, who, while gambling, told his butler to put some meat between two slices of bread so he could eat without interrupting the game and getting grease on the cards. Although the tale is almost certainly apocryphal (I figure the first sandwich was made the day after bread was invented), apparently the earl did lend his name to this gustatory delight.

At its simplest, a sandwich is two slices of bread enclosing a filling. It also is often a perfectly balanced meal, consisting of protein, vegetable, carbohydrate, often dairy and even fruit. My definition is somewhat broader: A sandwich is a filling enclosed in bread or pastry that can be eaten by hand.

That definition leaves out such things as open-faced roast beef or turkey sandwiches smothered in gravy that must be eaten with a knife and fork. And although most burgers qualify, my favorite burger at my favorite diner is out because the thing is just too big to wield by hand. I ultimately resort to cutlery.

My definition includes such things as wraps, tacos, Cornish pasties, empanadas and stuffed pitas — all of which can be held in one hand while playing cards.

A few genuine sandwiches can be problematic. A proper Philly cheese steak requires two hands to eat, as does a Chicago Italian beef sandwich. Both also require a proper stance (standing, legs spread, leaning forward) to eat if you want to avoid dripping on your shirt or splattering on your pants. This makes playing cards at the same time difficult, although not impossible. Cutting the sandwiches in half and wrapping them in foil helps.

Wherever a sandwich is from, though, its foundation, its most important single element, is the bread. Great bread can elevate great ingredients to new heights. Bad bread can make even the finest fillings ho-hum.

I was once asked what is the longest time I have ever spent on a sandwich. My answer was over 38 hours. I had an urge for a ham and cheese panini, and I began by reviving my chilled sourdough starter (12 hours). When the starter was once again bubbling away, I moved on to the poolish — a second fermentation phase lasting eight hours. Then I let the bread rise (four hours), formed it into a loaf and refrigerated it overnight (eight hours). Next, I let the loaf rise (four hours) and baked it (30 minutes), and let it cool (two hours). Then I cut two slices, brushed them with olive oil and added Black Forest ham, a bit of mustard and butterkase cheese before grilling the sandwich.

You don't have to bake your own bread; good bread is readily available. However, the bread should be the first consideration, not an afterthought.

None of the sandwiches below are quick, spur-of-the-moment affairs, but they are all worth the time. With a little care, they can be eaten with one hand while playing Texas Hold' em. 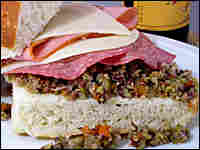 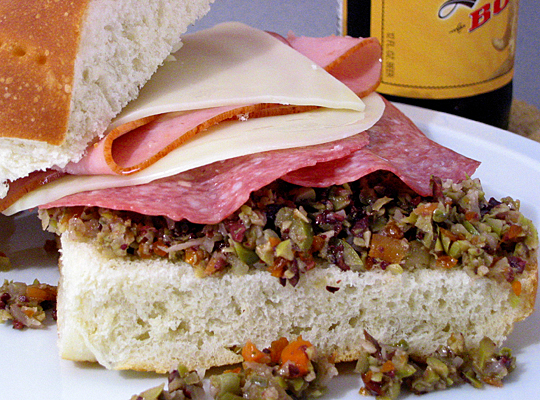 In the mid-19th century, an influx of Italian immigrants to New Orleans affected the city's cuisine in many ways — including the birth of the muffaletta sandwich. This amazing meal consists of ham, salami, mortadella, provolone and mozzarella served on an 8-inch loaf of round, flattened bread (typically half- and quarter-sandwiches also are available). I've never seen the bread anywhere else, but recipes are available on the Internet. A good Italian loaf or a Kaiser roll will also work. The astounding thing about this sandwich, though, is the olive mix. The pungent combination of pimento-stuffed olives, kalamata olives, Italian pickled vegetables, garlic and olive oil is spread on the bottom of the heap. Ideally, the sandwich should be made an hour or more in advance and then tightly wrapped in plastic to enable the juices to soak the bread.

1/4 pound sliced mortadella (Italian bologna. If you can't find it, skip it.)

Cut bread in half horizontally. Spread half with olive mix, then layer on meats and cheeses. Top with other half of bread. If using muffaletta or Italian bread, slice into quarters before serving.

A couple of years ago, a friend brought me a jar of olive mix from New Orleans' Central Grocery, the birthplace of the muffaletta, so I had an opportunity to compare the version I'd developed with the original. I use a bit more garlic and add lemon juice, which makes it slightly more tangy. My mix has been tested and approved by New Orleans natives.

Makes enough for 8 to 10 sandwiches

1/2 cup giardiniera (Italian pickled vegetables, available in the pickle section of most supermarkets)

Drain all ingredients. Place all ingredients in a food processor and pulse until coarsely chopped. For best results, refrigerate overnight to let flavors meld.

Mixture will keep for 6 months sealed in a glass jar in the refrigerator. 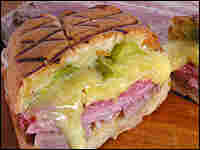 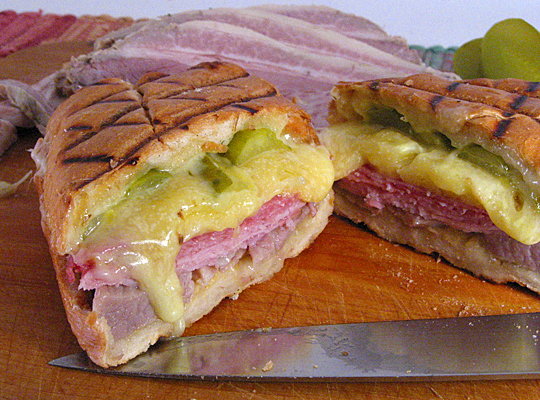 These panini-style sandwiches of citrus-braised pork, ham, salami and cheese are knock-dead delicious. Brushed with butter and then cooked on a grill pan, panini maker or even a griddle, the sandwiches are sold throughout Miami. It's the sliced pork that makes this sandwich special, but the additions of common ballpark mustard and dill sandwich pickles make it fun. As with the muffaletta, this sandwich is associated with a particular bread (you can find recipes for Cuban bread online), and I often bake the bread myself. A decent Italian bread also works. You will have to make the pork roast in advance.

If you have a panini maker, press sandwich and cook until cheese melts.

If you're using a grill pan or griddle, press the sandwich with a baking sheet weighed down with a few canned goods. Turn the sandwich after about 7 minutes, and cook until browned.

Combine all ingredients in a zip-top bag and shake to mix. Marinate 24 hours, refrigerated, occasionally turning to make sure all sides of the meat are treated.

Heat oven to 325 degrees. Place roast in a Dutch oven and add marinade. Cover and cook for 3 hours, turning once or twice. If liquid gets too low, add some water.

When done, place on a cutting board, tented with foil, and allow to rest for 15 minutes. Cut in half and, exercising all of your willpower, set half aside for sandwiches tomorrow. 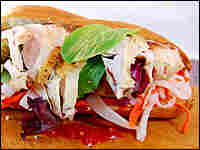 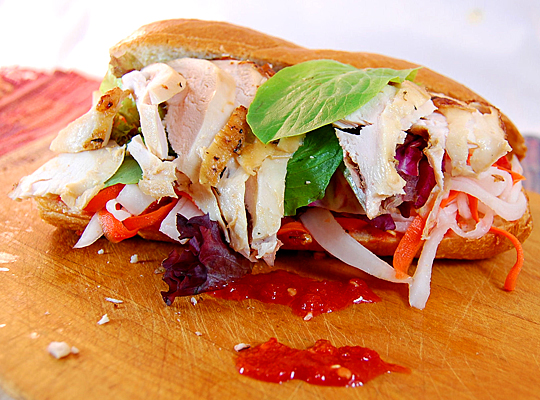 An example of the fusion of colonial French and traditional Vietnamese cuisines, this sandwich requires dedication — not to make it, but to eat it. The Vietnamese like things hot, and their chili garlic sauce is certainly that. In addition, sliced jalapeno or serrano peppers are often added. The sandwich consists of chicken, pork, shrimp or beef with pickled daikon and carrots, and cilantro and assorted lettuce greens on a French baguette.

Combine vinegar, sugar and salt in a bowl and whisk to dissolve sugar. Add daikon and carrot and marinate for 30 minutes.

Cut baguette in half horizontally. Spread bottom half with chili garlic sauce, top with remaining ingredients and cut crosswise into 4 sandwiches. 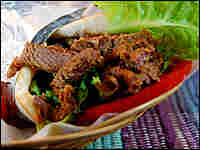 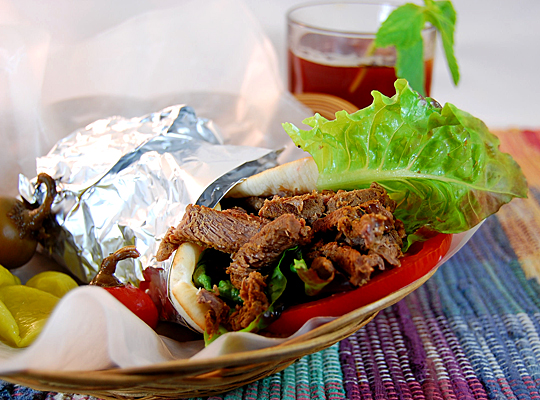 The shawarma is a Middle Eastern version of the Greek gyro, made with chicken, turkey or lamb. In either sandwich, the meat is meltingly tender, partially because of the marinade and partially because it's presliced and then packed back together before it's roasted slowly on a vertical spit in front of a layered fire. My efforts to duplicate this have failed in the past, and I finally figured out why: I was cooking the meat too quickly. So I slowed it down by giving the meat an hour to cook in a low oven and got as close to perfect as you can get without a vertical rotisserie. The meat marinates for a day.

Thoroughly mix all marinade ingredients in a bowl. Pour into a large zip-top bag and add lamb steaks. Toss to coat thoroughly and refrigerate for 8 to 24 hours, tossing every now and then to redistribute marinade.

Remove steaks from bag, discarding marinade, and wipe dry (more or less) with paper towels. Heat 2 tablespoons olive oil in a large, lidded saute pan over medium-high heat. Brown steaks on both sides in pan (about 3 minutes per side).

Pour off excess oil, cover saute pan and roast in the oven for 1 hour. Meanwhile, combine sauce ingredients in a small bowl.

Remove meat from pan and slice steaks thinly across the grain. Spoon sauce down the center of a flatbread or pita. Add tomato and a leaf or two of lettuce. Add lamb, roll up and enjoy.

Oh, and save those juices in the saute pan and sop bread in them for an amazing treat.