Accessibility links
Maryland Residents Asked To Cut Energy Use Maryland Gov. Martin O'Malley, would like to see a 15 percent per-capita reduction in energy use by 2015. But achieving this reduction will require residents to change everyday behaviors and use more energy-efficient technologies. 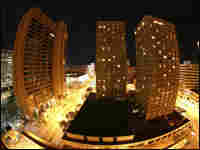 Reducing Electricity Use:
How The States Compare

At least 19 states, including the ones listed below, are working on legislation to reduce their statewide electricity consumption. The catch? Most goals are to reduce use below forecasted demand. But because demand is increasing along with economic growth, most of the effort will just slow the rate of increase, not reduce actual use — or actual emissions. Here's a sample of what states are doing:

More than a dozen states around the country have made lofty promises to cut back on power use to save taxpayers money, reduce stress on energy markets and improve the environment. While the goal is noble, these states face a major stumbling block: public buy-in.

People just aren't jumping at the chance to save energy.

That's partly because electricity is still relatively cheap, says Michael Dworkin, who has been involved in Vermont's energy-use reduction program — one of the most successful so far.

Someone who spends $160 a month on electricity, for example, would save less than a dollar a day by cutting electric use by 15 percent.

But as the price of fossil fuels climbs, Dworkin says it doesn't make sense for people to wait until the pain of higher bills prompts them to act. "Efficiency is by far the better choice," he says.

Maryland is one state that has set an ambitious power-reduction goal. Gov. Martin O'Malley's EmPOWER initiative calls for a 15 percent per-capita cut in energy use by 2015. Whether the state reaches its target will be largely in the hands of its residents.

On a household level, cutting energy use involves changes of everyday behaviors — unplugging the television when it's not in use, using a fan instead of an air conditioner, using energy-saving products.

Malcolm Woolf, head of the Maryland Energy Administration, acknowledges that spending money on new appliances may be difficult to justify, particularly in these tough economic times.

"A lot of us are struggling to simply pay that month's bill," says Woolf, who is tasked with making sure the state reaches its goal.

However, he notes that these small savings accrue over time, and if fossil fuels become more expensive, savings will become more noticeable.

"These are investments that do make sense," he says. "They will reduce your bill. You will get your money back over a period of months and years."

Not all energy-efficient technologies require a large upfront investment. Using compact fluorescent light bulbs instead of incandescent bulbs, for example, is a relatively easy way to cut home energy use. But many people don't use them because it's not easy to see where the savings are.

On Earth Day, Harry Jaeger was in a hardware store in Silver Spring, Md. He saw compact fluorescent light bulbs for 99 cents each and quickly scooped up an armful.

"Everyone always says that CFLs are expensive. So since they're 99 cents, we decided to go for a few," he says. These will be the first in his house, but he is not sure yet where to put them. "We'll figure out what burns out first in the house, and that's where we'll go."

Jaeger's comments reflect the challenges of promoting energy efficiency. He did not know he could have saved on his electric bills even if he had bought the bulbs for $5 or even $10 apiece. Each bulb saves $12 a year, assuming it is in a lamp that is turned on a lot. So even now, Jaeger is wasting money waiting for his old bulbs to burn out.

A public education effort may correct this problem, but Maryland is still figuring the best way to go about this. The state plans to train several thousand home energy consultants, equipped to make home visits and advise people on how to reduce electricity use.

Conceptually, it makes a lot of sense — but it may prove difficult to persuade people to spend $250 to $500 to hire a consultant, who's likely to tell them to spend hundreds of dollars more. And there's no knowing how much money someone might save on their electric bill until they've hired this consultant to tell them.

It's not clear whether Maryland will be able to achieve its energy-reduction target by 2015. There is no reward or punishment motivating residents to help out. Instead, O'Malley is pushing state and local governments to reduce electricity use so that they lead by example.

But some think that encouragement from on high won't be enough to compel people to make lifestyle and spending changes.

"It makes sense to have a goal if you're willing to tie impacts to it and results and responsibility for it. Declaring a goal without responsibility is a waste of time for everybody," says Dworkin, head of the Institute for Energy and the Environment at Vermont Law School.

Dworkin says Vermont set realistic goals and is meeting them. But those goals are much less ambitious than the ones set forth in states such as Maryland, California, New Jersey, New York and Massachusetts.

Woolf admits that Maryland is trying to bite off a lot.

"This is an aspirational goal," he says. "We want to achieve 15 percent. If we're successful, we think it's the same as avoiding three new power plants. It will save the state $6 billion. Some outside groups have estimated that it will create over 8,000 green-collar jobs. If in fact we fall a little short and we've only reduced consumption 12 percent and it only creates 7,000 jobs and avoids two power plants, I think that is a victory for consumers in Maryland."

Even if Maryland is able to push per-capita energy use down by 15 percent, the state's overall carbon emissions would only be cut by 4 percent, since automobiles and heating fuels are also generating emissions. In addition, new households will be created with population growth, further driving up the state's energy use.

Conservation may be the cheapest way to address climate change, but that's not to say it's easy.