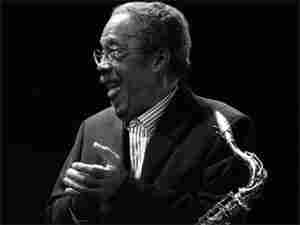 Weiss didn't even bother to dream that he would play with Griffin someday, but in 1987, drummer Kenny Washington brought Weiss into the band for an amazing tour. It commenced with eleven nights in a row, hitting cities across the country, and soon thereafter, Japan. The tours continued every year until 2001. Griffin looked forward to them. As he reconnected with his U.S. trio from his home in France, he would say, "I'm going to have to get ready to play with you cats."

As a student at DuSable High School, under the legendary Captain Walter Dyett, Griffin learned the reeds including oboe and English horn. In the Army, Griffin was sent to Hawaii to play oboe in a military band; most of the soldiers drafted with him were killed in Korea. In New York in the late 1950s, he worked most notably with Thelonious Monk. Griffin's first booking as a leader at the Village Vanguard came in November, 1959. He moved to Paris in 1963. The concerts with Dexter Gordon — one in Ann Arbor, one at Carnegie Hall — were his homecoming after 15 years in Europe.

Vanguard proprietor Lorraine Gordon cites the big old poster of Gordon and Griffin from 1978 on the wall and says, "He was a great star. Everyone loved him because he was adorable, lots of fun, a true musician in the best sense... He was an original. No matter what he played, it 'swang.'"

Weiss agrees. "Griff was fun to be around. He listened closely to what the other musicians played and enjoyed listening to the struggle. His eyes would light up and he'd smile that big smile when he heard me wrestle with something. He was along for the ride. Although he was deadly serious about making music on the bandstand, playing jazz — for him — was a positive, joyous experience. That feeling spread to everyone in the audience. He had the people, all the time." Weiss last spoke to Griffin five weeks before the leader's death.

In the words of Dee Dee Bridgewater, who coincidentally moved to France 25 years after Griffin, "[Johnny's] playing reflected his personality — crisp, soulful, heartfelt, clean, smooth. Johnny always had a glint of playfulness in his eyes. His outlook on life was youthful, and he kept that youthfulness alive throughout his life, even during his suffering.

"I rejoice at having had the opportunity of personally being touched by Johnny, laughing at life with Johnny." Though writers invented the phrase "tough tenor" for Griffin and his few peers, Bridgewater calls him something else — "a true jazz angel."