Accessibility links
Storm Petrels Fill The Air Biologist Michael Andersen finds himself surrounded by half a million storm petrels tumbling through the air, and occasionally into his equipment. 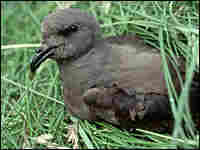 The Leach's storm petrel lays its egg in a burrow in the ground and shares incubating duties with its mate. Sigurgeir Jonasson/Frank Lane Picture Agency/Corbis hide caption 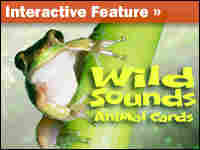 Take A Walk Through The Wild

Standing in a forest in Alaska, biologist Michael Andersen finds himself surrounded by half a million storm petrels flying through the air.

"There's so many of these birds that they can't help flying into the microphone or the tripod," he says. "Or even one time, a bird flew right into my head."

Once a year every summer, an invasion overwhelms the tiny island of Saint Lazaria off Alaska's southwest coast. Swarms of seabirds descend to breed. Andersen, from the University of Kansas, recorded the calls of two kinds of storm petrels: the Leach's storm petrel and the fork-tailed petrel.

The dark, sooty colored fork-tailed storm petrels and the lighter colored Leach's storm petrels are closely related, but they have distinct vocalizations. Individual birds can recognize the voices of their mate.

Petrels on this island gather in huge colonies to breed, although they pair up monogamously to share the tasks of incubating and raising the young in burrows on the forest floor. This time of night sees a changing of the guard for the nocturnal birds, in which one bird comes back to incubate the egg while the other goes out to forage.

"As they fly through the trees, oftentimes they're crashing through the limbs of the trees, stumbling down to the ground and then scurrying about, calling to their mate to find their particular burrow," says Andersen.

The fork-tailed storm petrel breeds on nearly inaccessible islands in the colder northern climes of the Pacific, while the Leach's storm petrel can be found in coastal areas around the world's oceans. Both species feed on plankton.