Accessibility links
Extra Golden Plays 'Obama' Live In Studio Extra Golden is a unique group: a true collaboration of American and Kenyan musicians who play an original blend of Kenyan benga and American rock. On its extensive world tour, the quintet played its music and a traditional benga tune in a session recorded by KEXP. 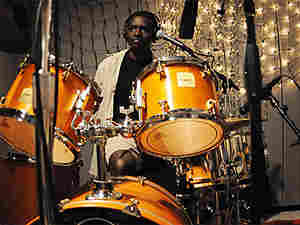 Extra Golden is a unique band made even more so by its connection to Barack Obama. In 2006 the President-Elect and his office made it possible for the group's Kenyan members to obtain visas to play in the U.S., and in gratitude they wrote the song "Obama". The lyrics are, "Thanks for the things you did, and thank your Mother too." Per Nigerian tradition, the song also thanks Michelle Obama.

Extra Golden is a true collaboration of American and Kenyan musicians who play an original blend of Kenyan benga (the popular guitar-based style, performed by the Luo people of Western Kenya) and American rock.

Since the dramatic events in the band's lives — including the tragic death of original singer and guitarist Otieno Jagwasi — Extra Golden came back after its debut album to record Hera Ma Nono. The group toured the U.S. this summer, and was primed to play in the KEXP studios when it arrived in June.

Times have been difficult in Kenya, following the controversial election at the end of 2007 and the violence that followed. In their interview with KEXP, the band talked about the hard times that followed, as well as how they might be received with their original music back in Kenya. Extra Golden seemed happy to be touring across the U.S. and Canada this summer, as well as through the U.K. and Europe following this in-studio performance.