Accessibility links
Democrats Call For Probe Of EPA Chief's Testimony Democratic senators are calling for a perjury investigation into comments made by the head of the Environmental Protection Agency. The senators claim EPA chief Stephen Johnson lied to Congress and folded under White House pressure on global warming policy. 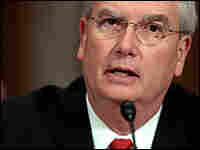 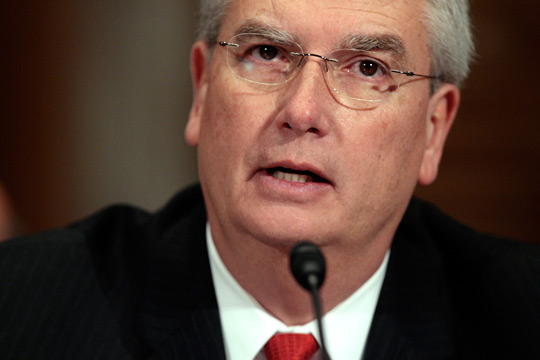 EPA Administrator Stephen Johnson testifies before the Senate Committee on Environment and Public Works on Capitol Hill in January.

Democratic senators are calling for a perjury investigation into comments made by the head of the Environmental Protection Agency.

Last winter, Johnson testified that he decided on his own to reject a California proposal that would regulate greenhouse gas emissions from cars. But that doesn't match more recent testimony delivered by a former global warming specialist at the EPA.

In January, Johnson told the Senate Committee on Environment and Public Works how he came to the decision to deny California a waiver that would allow the state to implement environmental rules that exceed federal standards.

"Administrator Johnson tried very hard to convince us that the California waiver was denied as the result of a process that involved him making a decision that was, to use his words repeatedly, 'mine and mine alone,'" says Democratic Sen. Sheldon Whitehouse of Rhode Island.

Johnson also told the panel that any contact with the White House on the matter was routine.

But recently, a former EPA official who worked closely with Johnson told the Senate committee a very different version of that story. According to Jason Burnett, Johnson was about to approve California's request until he checked in with the White House.

"The response was that the president had a policy preference for a single standard that would be inconsistent with granting the waiver," said Burnett, a former EPA global warming specialist.

Burnett said Johnson then overruled the unanimous recommendation of his staff and denied the waiver request.

Whitehouse made this statement at a press conference, where he was joined by two of Johnson's most relentless critics from the Democratic Party: Sens. Amy Klobuchar of Minnesota and Barbara Boxer of California.

At recent hearings, Boxer charged that Johnson helped the White House pull the teeth out of a report on the potential effects of global warming — against the advice of the EPA's own global warming scientists.

Burnett told the Senate that one of those teeth was a harsh assessment of public health problems caused by global warming.

"Severe heat waves are projected to intensify in magnitude and duration over portions of the U.S. where these events already occur, with likely increases in mortality and morbidity, especially among the elderly, the young and the frail," Burnett said.

A spokesman for Johnson made it clear that he does not expect anything to come of the request for a perjury investigation.

"I think Sen. Boxer and her colleagues should leave reruns to the sitcoms," EPA spokesman Jonathan Shrader said. "Johnson's record at the EPA is one of aggressive protection of environmental standards. Sen. Boxer's record is one of press conferences and tirades."