Accessibility links
Congress Apologizes for Slavery, Jim Crow The U.S. House of Representatives issued an unprecedented apology to black Americans on Tuesday for the institution of slavery and subsequent Jim Crow laws that for years discriminated against blacks. Rep. Steve Cohen, a Democrat from Tennessee, drafted the resolution and explains its timing. 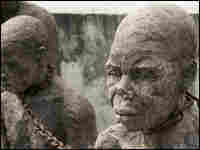 On Tuesday, the U.S. House of Representatives issued an unprecedented apology to black Americans for the institution of slavery, and the subsequent Jim Crow laws that for years discriminated against blacks as second-class citizens in American society.

Rep. Steve Cohen, a Democrat from Tennessee, drafted the resolution. Cohen explains the apology's long journey for Congressional approval and the significance of its timing.

Thank you, Mr. Speaker, and Mr. Chairman. It is with pride that I introduce this resolution with 120 co-sponsors from both sides of the aisle. It is with pride that I serve as a member of this institution, in this building that was built with slave labor, and for which the new Visitors Gallery will be known as Emancipation Hall. It was a gentleman from this side of the aisle, the party of Lincoln, Representative Zach Wamp from my state, and this side of the aisle, Representative Jesse Jackson Jr., who eloquently spoke to a subcommittee of which I'm a member, urging the remembrance and recognition of the work of the slaves who helped construct this magnificent capitol building and have the entryway named Emancipation Hall.

This country had an institution of slavery for 246 years and followed it with Jim Crow laws that denied people equal opportunity under the law. There was segregation in the south and other places in this country, at least through the year 1965 when civil rights laws were passed. There were separate water fountains for people, marked white and colored, there were restaurants, there were separate hotels, there were job opportunities that were not available to African-Americans. There were theaters that were segregated.

It's hard to imagine, in 2008, that such a society existed and was sanctioned by law, that the laws of the nation provided for segregation and enforced slave fugitive slave laws. In fact, the history of slavery goes not just through the Emancipation Proclamation and the 13th, 14th, and 15th amendments to our constitution, but as so eloquently written, just yesterday, in "The Baltimore Sun" in an editorial by Mr. Leonard Pitts Jr., that slavery existed up until about World War II, but it was a form of slavery where people were bought and sold for debts, it was slavery by another name. In a book called Slavery By Another Name by Douglass Blackman, a correspondent for the Wall Street Journal, when he talked about a convict leasing system in the south where in poor black men were routinely snatched up and tried on false petty or nonexistent charges by compliant courts, assessed some fine they could not afford, and then put into the servitude of an individual who bought them. This system continued up until World War II.

The fact is, slavery and Jim Crow are stains upon what is the greatest nation on the face of the earth and the greatest government ever conceived by man. But when we conceived this government and said all men were created equal we didn't in fact make all men equal, nor did we make women equal. We have worked to form a more perfect union, and part of forming a more perfect union is laws, and part of it is such as resolutions like we have before us today where we face up to our mistakes and we apologize, as anyone should apologize for things that were done in the past that were wrong. And we begin a dialogue that will hopefully lead us to a better understanding of where we are in America today and why certain conditions exist.

In 1997, President Clinton talked to the nation about the problem this country had with race. And he wanted a national dialogue. He considered an apology for slavery. I happened to run into President Clinton at that time, at the Amtrak station here in Washington and discussed with him having an apology for Jim Crow as well as slavery. I encompassed that in a letter dated July 2, 1997 that as a state Senator in Tennessee I wrote to President Clinton. In that letter, I urged him to have a slavery apology and a Jim Crow apology and to mark it on the 30th Anniversary of the Assassination of Dr. Martin Luther King, and that event tragically took place in April of 1968 in my city and that the appropriate time for President Clinton to have that apology would be on that 30th anniversary.

In going through my papers as I was elected to congress, I found this letter and I thought about it and I said to myself, you're a member of congress, you don't need to wait on a response from the President of the United States, which my friend, the president's office, failed to make a response. I can take action myself. So I introduced the resolution in February of 2007 with 120 sponsors joining me as time went on. It is important on this day that we admit our error, that we apologize. I've been in this body and voted with the rest of the body on unanimous voice vote to encourage, this past year, the Japanese Government to apologize for its use of Chinese women as "comfort women" during the war. And not a voice was raised questioning that resolution which passed unanimously on us calling on a foreign country to apologize for its use of "comfort women." Twenty years ago this congress passed a bill apologizing for the internment of Japanese citizens during World War II. In fact, subsequent to the consideration of this resolution, the distinguished lady from California, Ms. Matsui, has a resolution recognizing and celebrating the 20th anniversary of the passage of that bill.

This Congress did the right thing in apologizing for the imprisonment of Japanese-Americans during World War II and in encouraging the Japanese Government to apologize for the use of "comfort women." But the fact that this government has not apologized to its own citizens, African-Americans, for the institution of slavery and for the Jim Crow laws that followed and accepted that fact and encouraged changes in our dialogue and understanding in the actions of this country to rectify that is certainly a mistake. And today we rectify that mistake. This is a symbolic resolution but hopefully it will begin a dialogue where people will open their hearts and their minds to the problems that face this country, from racism that exists in this country on both sides and which must end if we're to go forward as the country that we were created to be and which we are destined to be. So it is with great honor that I speak on this resolution and urge the members of this body to pass this historic resolution, recognize our errors, but also recognize the greatness of this country, because only a great country can recognize and admit its mistakes and then travel forth to create indeed a more perfect union that works to bring people of all races, religions and creeds together in unity as Americans part of the United States of America. Mr. Speaker, I thank you for the time and I urge my colleagues to vote unanimously to pass this resolution today. Thank you.