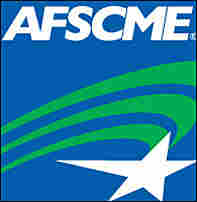 Click here to see ads by this organization on the Secret Money Project blog.

A union for government employees, affiliated with the AFL-CIO, the American Federation of State, County and Municipal Employees has 1.4 million members.

AFSCME originally endorsed New York Sen. Hillary Clinton in the Democratic presidential primaries. The group was also the main funder of the American Leadership Project, a 527 that ran pro-Clinton ads in key states.

The union gave $2.2 million to the effort and also ran its own ads supporting Clinton.

AFSCME later endorsed Illinois Sen. Barack Obama after Clinton conceded defeat in the race for the Democratic nomination. It teamed up with Obama-backer Moveon.org to run an anti-McCain ad. The union is a member of the Health Care for America Now coalition, and gives money to the Democratic Governors Association and America Votes.

Leadership: Gerald W. McEntee, William Lucy and Larry Scanlon. Read more about these leaders in The Secret Money Project's Who's Who Directory of Key Leaders of Independent Groups.

Will Evans is a reporter for the Center for Investigative Reporting, NPR's partner for the Secret Money Project.