Warning: getimagesize(https://media.npr.org/politics/politicaljunkie/2008/jul/chart3_420-54b0844f4809ea3e5c8d10a0200b220caa226c23.jpg): failed to open stream: HTTP request failed! HTTP/1.0 404 Not Found in /var/www/html/src/Views/CommonJsonldView.php on line 100
 Stevens' Indictment Latest Blow To GOP Hopes : NPR
Accessibility links
Stevens' Indictment Latest Blow To GOP Hopes Given that Sen. Ted Stevens (R-AK) had been under an ethics cloud for months, his indictment on Tuesday nonetheless came pretty much as a shock. The 84-year-old lawmaker, in office since 1968, is the longest-serving Republican in the history of the Senate. 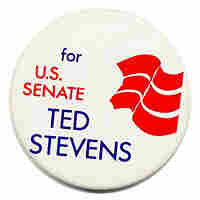 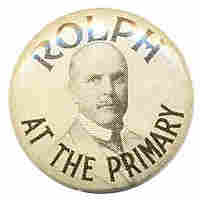 Thirty-three years ago today, the Senate — unable to determine who won the 1974 Wyman-Durkin contest in N.H. — declared the seat vacant. hide caption 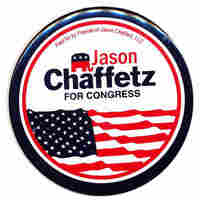 Republican Jason Chaffetz, 41, is an all but certain winner in Utah's 3rd Congressional District. hide caption 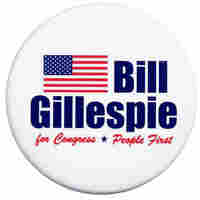 Given that Sen. Ted Stevens (R-AK) had been under an ethics cloud for months, his indictment on Tuesday nonetheless came pretty much as a shock.

The 84-year-old lawmaker, in office since 1968 and the longest-serving Republican in the history of the Senate, was charged with receiving more than $250,000 in gifts and services from an oil services contractor and failing to report it, as is required by law.

The contractor, VECO Corp., and its founder, Bill Allen, have long been under investigation for providing illegal payments to Alaska lawmakers. Two months after Allen pleaded guilty in May of 2007 to doing just that, the FBI and the IRS raided Stevens' home, looking for evidence that VECO had performed renovations on the residence. That no doubt led to this week's indictment.

The rumors swirling around Stevens led many to feel that he had become vulnerable, for the first time in his career, to a challenge back home. Democrats obliged, coming up with a potentially strong candidate in Anchorage Mayor Mark Begich. Last week, Sen. Charles Schumer (D-NY), who chairs his party's Senate campaign committee, flat-out said that Democrats would win the Alaska seat. The seeming bravado of last week suddenly looked more realistic.

With the filing deadline long gone, Republicans were in no position to replace Stevens on the ballot. Nor was there any indication (at least as of this early date) that Stevens was considering going without a fight. The feeling in party circles is that none of the Republicans already on the ballot appears capable of defeating Begich — though, for the record, a Democrat hasn't won a Senate seat in Alaska since 1974.

Theoretically, Stevens could decide to run, win the primary and then step aside — perhaps paving the way for someone like Sarah Palin, the squeaky-clean governor, to take his spot in the general election. But it's questionable that Stevens would do anything to benefit Palin, who is embroiled in what appears to be a generational split in the state GOP. Palin backs a primary challenge to a Stevens ally, Rep. Don Young (R), who has been in the House since 1973. Young is under FBI investigation into whether he helped a Florida developer who had been a major campaign benefactor. His opponent in the Aug. 26 GOP primary, Lt. Gov. Sean Parnell, has Palin's full support.

Stevens is the first incumbent senator to be indicted since Sept. 27, 1993, when Kay Bailey Hutchison (R-TX) was charged with three counts of official misconduct while she was Texas state treasurer. Additional charges were filed the following January. A judge ordered her acquitted of all counts on Feb. 11, 1994.

Ratings change: It is too soon to say what the indictment of Stevens means politically, but it's not too soon to say that, at the least, our categorizing of the Alaska race on our Senate map goes from Leans Republican to Tossup, with the possibility of its heading in the Democrats' direction, depending on how this story plays out.

Time for a couple of questions:

Q: How often have mayors of Los Angeles and San Francisco run for governor of California? — J. Foss, San Francisco

A: Not too infrequently. And it looks like the current mayors of L.A. (Antonio Villaraigosa) and S.F. (Gavin Newsom) are each preparing to jump into the race in 2010.

Here's a list of some instances where the mayors of the aforementioned California cities have run for governor. No sitting mayor of either city has been elected governor since San Francisco's James Rolph Jr. (R) won in 1930.

Note: Richard Riordan was a former mayor of Los Angeles when he ran for governor in 2002 and lost the GOP primary. Similarly, Dianne Feinstein (D) and George Christopher (R) were ex-S.F. mayors when they ran for gov in 1990 and 1966, respectively. When Democrat George Moscone briefly got in the 1974 gubernatorial contest, he was two years away from becoming mayor of San Francisco.

Q: How many times has an African-American member of the House been defeated by a white opponent? Who was the first to accomplish that? — Pat Reston, Washington, D.C.

A: When Peter Visclosky defeated Rep. Katie Hall (D) in the 1984 Democratic primary in Indiana's 1st Congressional District, it was the first time a white challenger had defeated a black incumbent in the 20th century.

The only other time was in 1996, when Rep. Gary Franks, an African-American Republican from Connecticut, lost to Democrat Jim Maloney, who was (and still is) white.

FROM THE MAILBAG: Last week's column included a complaint about a Jesse Helms obit I did for NPR's Morning Edition just minutes after his death on July 4. The writer said I glossed over Helms' racist tactics, calling my report "despicable." I argued that the obit included the good and the bad. Tom Vachon of Tamworth, N.H., was one of many who came down on my side: "I just listened to your instant obit of Jesse Helms, and found it thoroughly even-handed. While I personally despise everything Helms stood for, I have to concede that he was a major force in American politics for many years, and you captured that in your comments. Apparently, for some people, failure to vilify amounts to glorification."

Regarding the guessing game as to whom Illinois Gov. Rod Blagojevich (D) might appoint to the Senate should Barack Obama win the presidency, there were several who wrote in suggesting that the gov might appoint himself — and that came from some who simply wanted him out of the state. Dan Johnson-Weinberger, a Chicago attorney, mentioned a name we had not seen before: state Sen. Kwame Raoul.

MEET THE CHALLENGERS: Back in 2006, we initiated this feature, in which we asked you to send in campaign buttons for candidates for the Senate, House and governor. Our end of the bargain — aside from satisfying Ken Rudin's button craze, which is bordering on the unhealthy — would be to feature the candidates in a "meet the challenger" section. We are renewing the MTC this week, with the focus on Jason Chaffetz, a Republican running in Utah's 3rd CD, and Bill Gillespie, a Democrat in Georgia's 1st CD.

The 41-year-old Chaffetz is an all-but-certain winner in November, having knocked off Rep. Chris Cannon in the June 24 Republican primary in one of the most conservative and Republican districts in the country. Ideologically, Cannon seemed to fit the district perfectly, except for one thing: his position on immigration. Cannon was among the relatively few conservatives who supported President Bush's plan for a guest-worker program for illegal immigrants, a position Cannon called compassionate but one that opponents saw as amnesty. In 2004 and 2006, GOP challengers gave Cannon a tough renomination fight.

Chaffetz is the former chief of staff to Gov. Jon Huntsman (and he still holds school records from his days as the placekicker for Brigham Young University's football team in the late 1980s). Chaffetz jumped into this year's race calling for the deportation of all illegal immigrants. He also wants to abolish the Department of Education. The first-time candidate surprised both David Leavitt, thought to be the favorite for the nomination, as well as Cannon himself at the state convention in May. Chaffetz received 59 percent of the delegates for the party endorsement; had he gotten just nine more delegates, the race would have been over. The battle thus continued into the primary, where the well-funded Cannon had the endorsement of Bush, both of Utah's GOP senators, and all of the local newspapers. But Chaffetz had the voters; he defeated Cannon with 60 percent of the vote, and he is a clear favorite to defeat the Democratic nominee, former TV reporter Bennion Spencer, in the general.

Fun fact: While at BYU in 1988, Chaffetz was co-chair of the Dukakis presidential campaign in Utah. His father was briefly married to Kitty Dukakis; they later divorced and she went on to marry Michael Dukakis.

Gillespie retired last year after 23 years in the Army. He served in Iraq in 2003 and earned a Bronze Star. But he faces a tough fight in trying to unseat eight-term Republican Jack Kingston, who has never won re-election with less than 68 percent of the vote. Gillespie, a 44-year old conservative Democrat, has proposed a South Georgia Alternative Energy Initiative that he says would make the region the national leader for alternative energy research, production and commercialization. His other top issues include "stopping illegal immigration, reforming the health care and insurance industries, improving benefits for veterans, lowering taxes for families and small businesses, repealing the No Child Left Behind Act, balancing the federal budget, and promoting 'sustainable development.' "

Want to see your candidate's campaign button appear in the next column? And, at the same time, make Ken Rudin happy? Send your 2008 buttons to Political Junkie, 635 Massachusetts Ave., NW, Washington, DC 20001.

POLITICAL JUNKIE EVERY WEDNESDAY AT THE NEWSEUM: It's been several months now, and yet there are still people who don't know that my "Political Junkie" segment, which appears every Wednesday at 2 p.m. Eastern time on Talk of the Nation (NPR's call-in program), is before a live audience at the Newseum, Washington's new interactive museum dedicated to journalism. It is located at 555 Pennsylvania Ave., N.W., off Sixth Street.

Want to be part of the live audience? The tickets are free. And you get to see what Ken Rudin looks like in person, a worrisome proposition in any case. Send an e-mail request to tickets@npr.org.

Remember, if your local NPR station doesn't carry TOTN, you can hear the program on the Web or on HD radio. And if you are a subscriber to Sirius radio, you can find the show there as well (siriusly).

IT'S ALL POLITICS: That's the name of our weekly podcast. It goes up on the Web site every Thursday and can be heard here. Want to subscribe? It's easy, and it's free! Simply go to the iTunes Web site, type in "It's All Politics," and you're there.

This day in campaign history: The Senate voted 71-21 to declare New Hampshire's unresolved Senate seat between Louis Wyman (R) and John Durkin (D) vacant. A Republican-controlled N.H. ballot commission had decided that Wyman won the 1974 election by two votes, but the Democratic-controlled U.S. Senate refused to seat him (July 30, 1975). The Senate vote would lead to a Sept. 16 special election, which was won by Durkin. It was the first time since 1854 that Democrats held both N.H. Senate seats.