Accessibility links
Rick Ross: 'The Boss' Denies Prison-Guard Past Rick Ross' career has been built on the image of a swaggering, dominating hustler and drug dealer. But documents released to The Smoking Gun tell a different story about the rapper — and threaten to undermine his street cred. 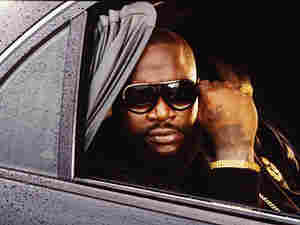 His music career has been built on the image of a swaggering, dominating hustler and drug dealer. But document after document released to The Smoking Gun tells a different story about Miami rapper Rick Ross.

In the middle of July, a picture of Ross in the uniform of a correctional officer surfaced. Ross said the picture was a fake, adding in an interview with AllHipHop.com, "My life is 100 percent real. These online hackers putting a picture of my face when I was a teenager in high school on other people's body." But documents released Monday seem to prove that Ross worked as a prison guard for 18 months, beginning in December 1995. Alex Cohen speaks to New York Times reporter Jon Caramanica about Ross' tricky situation: defending his street credibility in the face of evidence that there were at least some days during which he was not, in fact, hustling.