Accessibility links
More News, But Less 'News' While the news business is shrinking — and shrinking fast — why is it that there's more news everywhere you look? To understand, it's important to know the difference between "news gathering" and "news product."

The news about news is confusing.

The news business is shrinking, and shrinking fast. The Washington Post, the Los Angeles Times and the Chicago Tribune are just three of the many metropolitan dailies that are cutting newsroom staffs dramatically. The news divisions of the television networks have been in steady decline for years. Commercial news radio is getting scarce. Cable networks hire more hosts than reporters.

So why is there more news everywhere you look?

Thirty years ago, there was no cable. Now, there are three all-news cable channels, three business news channels and scads of entertainment, religious and sports channels. That's more news, right?

Fifteen years ago, there were no online news sites like this one. Now they are uncountable, available on demand 24-7, with instant, easy-to-produce news from every corner of the planet. That's more news, right?

At least, that is wrong depending on how you define news.

As evidence, consider the latest report from the Pew Research Center's Project for Excellence in Journalism, titled "The Changing Newsroom: Gains and Losses in Today's Papers." Among larger papers, 85 percent are cutting back on newsroom staff. The coverage areas being hit hardest are foreign, national and business news.

But there's a twist.

"Despite an image of decline, more people today in more places read the content produced in the newsrooms of American daily newspapers than at any time in years," the report says. "But revenues are tumbling."

More people are reading the "content" because it is available free online, anywhere, anytime. That's a good thing.

But news online doesn't make serious money, at least not yet. It certainly isn't generating enough new revenue to replace the money papers and networks are losing on news. And if online news sites had to actually gather the news they publish instead of retooling material from the wires, newspapers and networks, they would be dead in their tracks.

A pure free-marketer would say this: Since news consumers are increasingly less willing to pay for news or endure advertising in exchange for news, there must be diminished demand for news in society, and that is just fine. Consumers should get what they want.

Sadly, I agree with the first part of that. There is a diminished demand for the product that has traditionally been called news in our society. The reasons for this are sociological more than economic. News satisfies two great human urges — curiosity and community.

People naturally like to know what is going on in their communities. But communities are an endangered resource in America. Fewer and fewer people stay put where they grew up or stay put as adults. Increasingly, we live among strangers, without strong community. So, yes, the demand for that kind of news is down.

Similarly, as the American educational system decays, Americans know less about their own history and about the world. So they have less fertilizer to feed curiosity about the world. Demand for that kind of news is down, too.

The news media respond to this in two ways: first, by supplying more tabloid, celebrity and voyeuristic "stuff" and pretending it is news; second, by processing the news instead of gathering the news and selling advertising on that. On cable television, talking heads argue about the news; they rarely report it. Blogs argue about the news. Web sites run the same stories from The Associated Press.

All this further depresses the demand for old-fashioned news by discrediting the press even more.

There is one school of idealists who think this is great. Boosters of citizen journalism believe mainstream media can't die soon enough. They believe technology will make every man and woman a reporter. Citizens will rush to a plane crash and upload video to YouTube, blog about it on Facebook and tweet about it on Twitter.

Call me a curmudgeon, but I don't believe this can or should replace traditional news gathering. It's hard for citizens to get to war zones, famine sites and White House hallways. But I do hope citizen journalism can enhance journalism and force us to pick up our game.

So the paradox is that there is now more news product and less traditional news.

Is the glass half full or half empty?

I am a committed half-empty guy. In my experience, more is rarely better. Americans consume an extraordinary amount of media in a day, perhaps more media than what used to be called reality. I think more news product is clutter and is alienating. This is a great dilemma and challenge for a newsperson.

I also believe a democracy and an economy increasingly based on communication and information need people who try to gather true facts about important, interesting and distant events. That market seems to disagree. 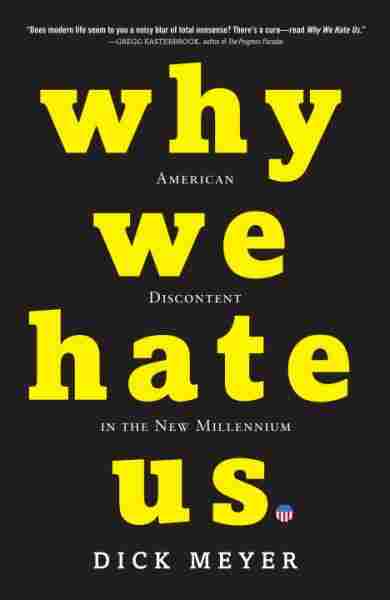 American Discontent in the New Millennium

Title
Why We Hate Us
Author
Dick Meyer