Accessibility links
Rice Meets With Israeli, Palestinian Officials U.S. Secretary of State Rice meets with visiting Israeli and Palestinian officials in a bid to revive flagging hopes of a peace settlement. With Israel's Prime Minister Ehud Olmert saying he will resign in September, a deal this year looks unlikely.

U.S. Secretary of State Rice meets with visiting Israeli and Palestinian officials in a bid to revive flagging hopes of a peace settlement. With Israel's Prime Minister Ehud Olmert saying he will resign in September, a deal this year looks unlikely.

At the State Department today, Condoleezza Rice tried to keep the push for Middle East peace on track. She met jointly with Palestinian and Israeli negotiators.

BLOCK: At the same time, there was news of political change in Israel. Prime Minister Ehud Olmert announced that he will resign when his party chooses a new leader. As far as the peace talks, both sides are raising doubts that a deal could be reached this year, and analysts are more skeptical than ever. NPR's Michele Kelemen has the story.

MICHELE KELEMEN: As the Secretary of State sat down with the chief Israeli and Palestinian negotiators, her spokesman, Sean McCormick, was managing expectations.

KELEMEN: It is a process that was formally launched last year, when Israeli Prime Minister Ehud Olmert and Palestinian Authority President Mahmoud Abbas came to Annapolis, Maryland. Expectations were never that high that the two men could reach an agreement on the borders between Israel and a future Palestinian state, the status of Jerusalem, refugees, and other thorny issues, but President Bush did raise the bar when he followed up the Annapolis conference with a trip to Israel and the West Bank.

KELEMEN: This week, Prime Minister Olmert said there is no practical chance for that, and analysts in Washington seem to agree.

Mr. SCOTT LASENSKY (U.S. Institute of Peace) The U.S. has done very little to realize the goal that the president set forth.

KELEMEN: That's Scott Lasensky of the U.S. Institute of Peace, who recently co- authored a book called "Negotiating Arab-Israeli Peace: American Leadership in the Middle East." He offers many reasons for the failure of the Bush administration's efforts, starting with the president's promise to monitor and make sure both sides are taking long-promised confidence-building steps - from an Israeli settlement freeze to Palestinian steps to improve security.

LASENSKY: If we fail to act as a judge, to use the president's word, we fail to positively make any impact on the ground for Palestinians; I think we fail to leverage regional diplomacy. Annapolis, remember, had many other parties there, and it seems as if that's the last time that we've really engaged them in a serious way.

KELEMEN: He also faults the Bush administration for not weighing in on the thorniest issues dividing the Palestinians and Israelis. He says the parties won't get far on these issues by themselves.

BLOCK: local politics. Israeli Prime Minister Olmert is facing corruption charges at home and announced today he won't run for reelection to head his party during a ballot in September. His foreign and defense ministers are both eyeing his job, and Jon Alterman, of the Center for Strategic and International Studies, says it will be difficult for any of these politicians to compromise in negotiations with the Palestinians.

JON ALTERMAN: There are so many people involved in this on the Israeli side who themselves hope to be prime minister, that the chance of getting a real breakthrough on somebody else's watch is extraordinarily low.

KELEMEN: Alterman says politics will overwhelm any chance of success.

KELEMEN: Alterman says there is something the U.S. can do: help the parties takes small steps to improve the situation on the ground and make future diplomacy possible. But as for the so-called Annapolis process, Alterman says he wrote its obituary even before the conference took place. 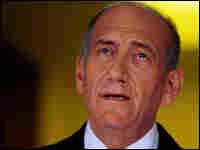 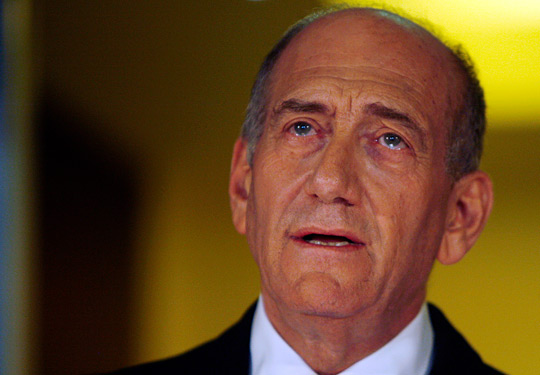 Israeli Prime Minister Ehud Olmert said Wednesday he will not run for his party's leadership in September, effectively ending his political career and paving the way for new leadership in Israel.

Olmert said ongoing corruption investigations have prevented him from doing his job.

"I'm not doing this from a feeling I can't fulfill my duties. I believe in my ability to fulfill my duties like [I believe] in my innocence, but the slander and the mudslinging against me...." he said, his words trailing off. "Almost from Day One I had to repel personal attacks and postpone decisions that are pertinent to the security of the state."

Police are looking into a number of corruption allegations, including claims that he took bribes from a U.S. businessman and double-billed nonprofit agencies for travel expenses.

In an announcement from his official residence in Jerusalem, Olmert said he will not be a candidate for leadership of the ruling Kadima party in primaries scheduled for Sept. 17.

"I have decided I won't run in the Kadima movement primaries, nor do I intend to intervene in the elections," Olmert said. "When a new [Kadima party] chairman is chosen, I will resign as prime minister to permit them to put together a new government swiftly and effectively."

Earlier this month, Long Island, N.Y., businessman Morris Talansky testified that he had given Olmert about $150,000 between 1992 and late 2005. During that period, Olmert served as mayor of Jerusalem and later in various national government positions. Olmert has denied wrongdoing.

Wednesday's announcement paved the way for cabinet ministers Tzipi Livni and Shaul Mofaz to battle for leadership of Kadima and replace Olmert as prime minister.

Secretary of State Condoleezza Rice, who is holding her latest round of talks in Washington, said Wednesday's discussions with Israelis and Palestinians were fruitful.

Israeli and Palestinian officials pledged to keep trying to achieve a peace accord before President Bush leaves office.