Accessibility links
Kennedy Center Celebrates The Trumpet Jazz today is blessed with many extraordinary trumpeters. We have two (Terell Stafford and Wallace Roney), as well as Christian McBride's trumpet-free band playing a Miles Davis blues piece, this week on JazzSet. 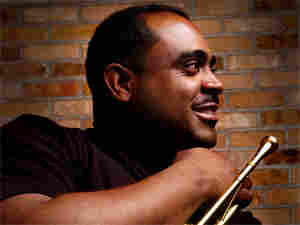 Terell Stafford paints the air with the bell of his horn. courtesy of the artist hide caption

On March 7, Terell Stafford and his men were winding up a three-week U.S. tour — and, in Stafford's words, "celebrating as hard as humanly possible" at the Kennedy Center Jazz Club in Washington, D.C. Bruce Barth's big frame bobs over the piano, Tim Warfield plants his feet and runs on tenor, Phil Palombi's hands cover the bass, and drummer Dana Hall closes his eyes and hollers. Stafford plays trumpet from his knees and paints with the bell of his horn, making brush strokes in the air. Ideas, speed, accuracy, commitment and a beautiful tone — he has them all.

Raised in nearby Silver Spring and a graduate of the University of Maryland and Rutgers University, Stafford directs Jazz Studies at Temple University. We'll hear more from his night in Washington on a future episode of JazzSet. In this set, his band plays "Time to Let Go" (Stafford) and "Blame It on My Youth" (Edward Heyman, Oscar Levant).

When the leader of the next group came out of Philadelphia in the late 1980s, everybody could see that young Christian McBride was going to be a self-starting, long-running, rock-solid bass player. He's become so much more. McBride oversees jazz programming at Walt Disney Concert Hall and co-directs The Jazz Museum in Harlem, Jazz Aspen Snowmass and the Dave Brubeck Institute. On Labor Day weekend, McBride will serve as artist-in-residence at the Detroit Jazz Festival, themed "A Love Supreme: The Philly/Detroit Summit." At the KCJC, his trumpet-free band gives us Miles Davis' "No Blues," from May 18, 2006.

From age 7, Wallace Roney studied for more than a decade with the Philadelphia Orchestra's Sigmund Hering, who authored classic trumpet method books and recognized Roney's gifts. When Roney performs in Washington, his high-school classmates from the Duke Ellington School of the Arts and Howard University turn out to hear him. In the early 1980s, Miles Davis became his mentor and friend. Roney's sound is intense, with a low flame and brilliance all in one, whether on an up-tempo tune or the ballad "Christina" by Buster Williams. Deft on turntables, Val Jeanty injects speaking voices into the mix, from March 31, 2007.