Accessibility links
Circus Smirkus: Training Clowns On Tour Where do circus clowns come from? Some of them are being trained by Circus Smirkus, an award-winning touring show for young aerialists, jugglers and rubber-nosed pranksters. Smirkus is an incubator of sorts, where scouts for big-time big tops find their new talent. 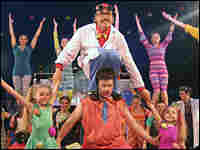 All On Stage: Ringmaster Troy Wunderle gets a boost from Shea Vaccaro, with help from Ariana (left) and Emily Wunderle. Andrea Shea/WBUR hide caption 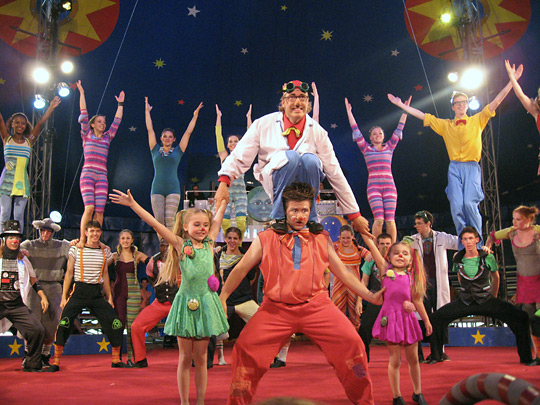 All On Stage: Ringmaster Troy Wunderle gets a boost from Shea Vaccaro, with help from Ariana (left) and Emily Wunderle.

See video shot by Andrea Shea of WBUR, at YouTube: 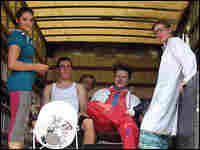 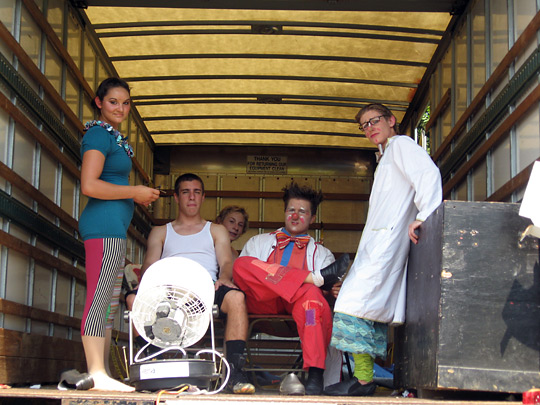 Teenagers At Rest: Clowns and performers relax before a show, including Eric Allen (far right).

Where do the clowns of tomorrow come from? Some of them are coming from Circus Smirkus, an award-winning touring training camp for aspiring aerialists, jugglers and rubber-nosed pranksters.

Smirkus is an incubator of sorts, where scouts for big time big tops, including Ringling Bros. and Barnum & Bailey, hire new talent.

At a recent show in Wellesley, Mass., Circus Smirkus looked and sounded like a traditional European-style show, with its canvas big top covered with stars. But there is a main difference: The troupe's performers are kids, some as young as 10.

One member, Eric Allen of Shelburne, Mass., is 18.

"I pretty much taught myself to do flips on my couch," Allen said.

Allen's uncle showed him how to juggle; his grandmother took him to see Buster Keaton in The Navigator. And he's had the big top in his sights ever since.

For the past three summers, Allen has been clowning with Smirkus in white greasepaint and a rubber nose.

"My character is kind of like the Jekyll and Hyde clown," Allen said. "So I'm a nerdy scientist who drinks a potion and then changes into a monster and so there are some clown gags with that."

LeClair says that Circus Smirkus is like boot camp. Each summer, 30 young clowns, aerialists and acrobats stage more than 70 shows all over New England.

Smirkus prepares kids for jobs in the real circus world. Around 10 to 15 percent go on to work for the big-time big tops, including Cirque du Soleil and Ringling Bros. and Barnum & Bailey Circus.

"Anywhere and everywhere," Holst said. "I just came back from an extended trip in Ukraine and Russia, Hungary, Romania. I'm often in China, Brazil, Peru, Chile, to find talent."

As for the type of talent he's on the lookout for, Holst said, "I'm looking for tumblers and wire walkers and jugglers — and clowns."

Good clowns are hard to find these days, Holst said. He watched Allen and the other others go through their paces during the show.

It was 22 years ago that Holst hired the Cirkus Smirkus band conductor, Peter Bufano, as a clown.

Bufano, who now works as a freelance circus musician, says he still remembers the day Holst found him.

"You know it was everything; I thought that all my problems were solved," Bufano said.

"I thought, 'I'm a clown on the biggest circus in the world; that's it; that's all I have to do for the rest of my life' — I was so wrong," he said with a laugh.

Bufano says that being a clown — show after show, town after town — is grueling.

But it was while Bufano was conducting the Circus Smirkus band that the ringmaster broke in to deliver big news. Two of the troupe, Allen and another young man, had just gotten contracts with Ringing Bros.

The move happened quickly: Allen signed a one-year contract with the big circus on the hood of a car right in the Circus Smirkus parking lot.

"It was pretty weird," Allen said.

"I didn't really know what to think it's like. I've never signed anything that big before and I'm like literally right out of high school too, like I just graduated and then I came here."

Allen will make $325 a week touring the country. And he says he knows it won't be easy.

Holst said that Ringling is taking a risk on Allen, too.

Confirmation of that potential had Allen hooting and celebrating. And this fall, when his friends head off to college, he'll be learning how to make them laugh — again and again and again.