Accessibility links
Dispute Over East Jerusalem Imperils Peace Talks As Israeli Prime Minister Ehud Olmert announces he will step down after fall elections, tensions are rising between Israelis and Palestinians over the possession of East Jerusalem. 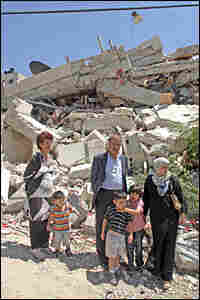 Majid Abu Eesha stands in front of his house, destroyed by Israelis because they say it was expanded without proper permission. Mahfuz Abu Turk for NPR hide caption 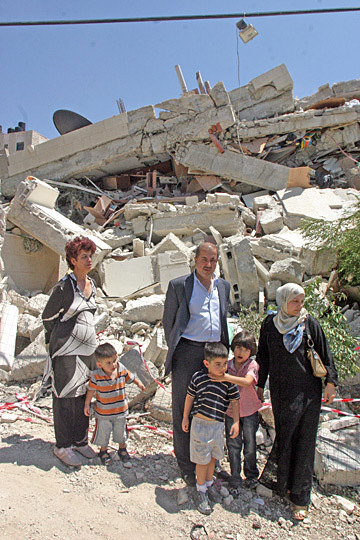 Majid Abu Eesha stands in front of his house, destroyed by Israelis because they say it was expanded without proper permission.

Israeli Prime Minister Ehud Olmert announced late Wednesday that he will step down after his party chooses a new leader in a primary election scheduled for mid-September.

Olmert's decision was not unexpected. He is facing corruption charges and an increasingly unhappy electorate, but his departure is unlikely to affect Israeli policy or the troubled talks with the Palestinians.

In Washington on Wednesday, a meeting of U.S., Israeli and Palestinian officials seemed to make little headway toward the stated goal of a peace deal by the end of this year. Olmert said this week that the ongoing dispute over Jerusalem makes it nearly impossible to achieve that objective.

In the East Jerusalem neighborhood of Beit Hanina, Arab residents are still seething after Israeli security forces blew up a house they said had been expanded without permission. Until late Monday, seven families had called the four-story apartment building home.

Ibrahim Kawasmee shakes his index finger at the massive pile of cement and metal that used to be his neighbor's four-story home. Remnants of crushed furniture can be seen poking out of the rubble.

"This is God's warning from the holy Koran: 'Israelis — you all will be punished for committing your huge sins on this land,'" Kawasmee says.

Israeli officials say they destroyed the home because of a zoning violation. They call it a legal demolition of an illegally expanded building. The owner, Majid Abu Eesha, sees it as an attempt to expel Arabs from the east side of the city that Israel captured in the 1967 war.

"This is a message to all East Jerusalemites," Eesha says. "They don't want any Arabs here. They want a pure Zionist Jerusalem."

The perception that the demolition of houses amounts to a Zionist land grab is widespread among Arab East Jerusalemites. Palestinians complain bitterly that Israel unfairly denies them building permits while encouraging Jews to build here.

After the 1967 war, Israel annexed East Jerusalem in a move that most of the international community does not recognize. Palestinians want the area as the capital of a future state, and conflicting claims to Jerusalem remain the toughest problem to resolve in any peace talks.

Olmert echoed those sentiments this week, saying: "There is no practical chance of reaching a comprehensive understanding on Jerusalem" this year.

For many Palestinians, there is no chance of reaching a peace deal without an understanding on Jerusalem.

In a worrying new trend for Israelis, the four attacks that took place in the Holy City this year were carried out by East Jerusalem Arabs. The strikes killed 12 Israelis and wounded dozens more, and police believe all four attackers acted alone. These so-called lone wolves don't have any discernible link to militant Palestinian groups, police say.

'The Ground Is Boiling'

"The four attacks since January show that the residents of East Jerusalem, Palestinians, they are boiling," says Israeli political scientist Menachem Klein. "The ground is boiling and shaking. Something is happening there."

Klein believes the government's policies regarding greater Jerusalem are exacerbating tensions. Jewish settlements on the edges of the city are expanding, and more Jews are moving into East Jerusalem.

Klein points out that the massive security barrier and wall Israel is constructing has strengthened its control of greater Jerusalem while cutting off Arab districts of the city from the West Bank.

"What we see recently is that Israel does not want to stop at the municipal boundaries of Jerusalem, the area that Israel annexed immediate after the '67 war," Klein says. "Israel wants to annex, de facto, all the land the barrier takes in Jerusalem, greater Jerusalem, which is about 4 percent of the West Bank instead of about 1 percent that Israel took in '67."

Klein says the policies for greater Jerusalem have created huge demographic and security challenges for the Jewish state, problems he thinks are undermining talks with the Palestinians.