Accessibility links
In Switzerland, An Easier Path For The Disabled In Switzerland, disabled children can receive quality care even after their parents pass away. In the United States, people with disabilities can face a future that is much more precarious.

Listen
In Switzerland, An Easier Path For The Disabled 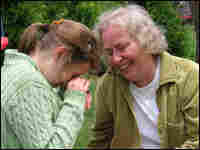 Ellen Wallace and her 16-year-old daughter, Tara, live in the Valais region of Switzerland and spend as much time together as they can. Rebecca Davis/NPR hide caption 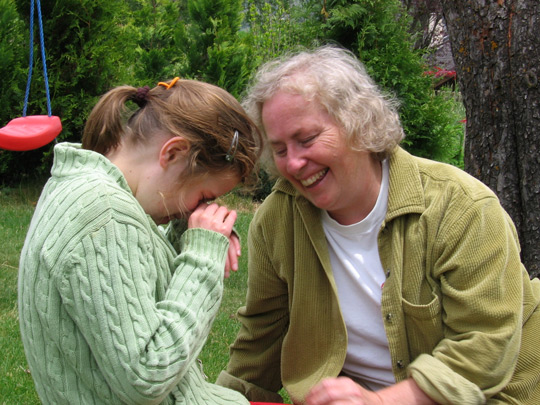 Ellen Wallace and her 16-year-old daughter, Tara, live in the Valais region of Switzerland and spend as much time together as they can. 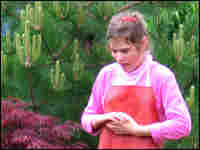 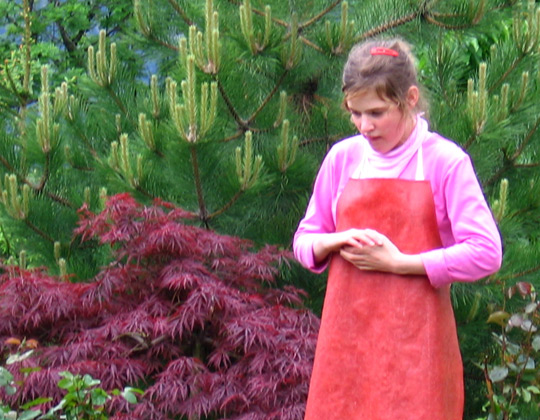 Tara, who is autistic, receives care from the Swiss government. 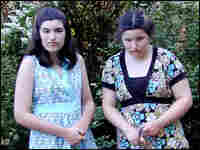 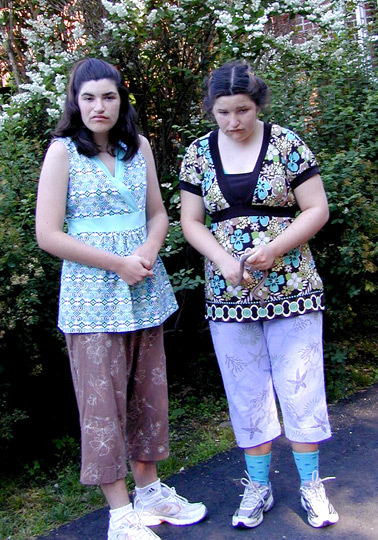 The Herlihy sisters, 19-year-old Julia (right) and 17-year-old Lily, stand in front of their home, a converted convent in Gloucester, Mass. 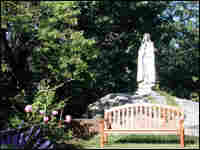 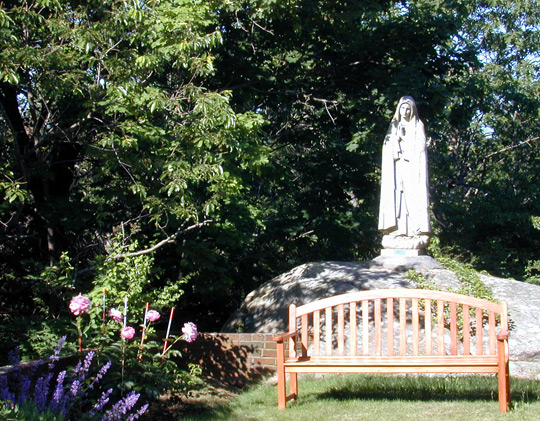 Nancy Legendre and Walter Herlihy live in a converted convent, to accommodate their two teenage autistic daughters. When it was in operation, the convent belonged to the Dominican Sisters of St. Catharine of Sienna.

Ellen Wallace, Nick Bates and their 16-year-old daughter, Tara, spend as much time as they can in their little wooden house on a winding mountain road in the Valais region of Switzerland.

The neighbor's cows moo impatiently, waiting to be milked, as Wallace tends the vegetable garden. Meanwhile, her husband grills fresh trout on the barbecue and Tara gnaws on a set of plastic ducks she carries with her everywhere.

Blue-eyed, blond-haired Tara is autistic. She does not speak, although she communicates using a series of grunts and other sounds. Tara is small for her age — she failed to grow at all for several years — but is every bit the rebellious teenager.

"Tara, that's gross," Wallace reproaches, as her daughter dumps a plastic cup of yogurt all over the lawn. "Did you not want that yogurt? Why'd you dump it upside down?" Wallace says with a half laugh, half sigh. "You're very pleased with yourself, aren't you?"

Wallace is originally from Iowa. Bates is from England. They married and settled in a little town near Lausanne in Switzerland, where he teaches high school and she runs a Web site.

Soon after moving to Switzerland, Wallace gave birth to a healthy son, Liam, now a college student in Canada. Four years later came Tara. Wallace says she knew by the time Tara was 3 months old that something was wrong.

"I'm very grateful I'd already had a child that was breastfed, because I had very clear memories of how lovely it is when you're breastfeeding a little baby and they are looking up at you," she says. "There's that eye contact that is so critical. And Tara at this point ... never looked me in the eye. It just didn't feel quite right."

Tara soon began to suffer from a series of health problems, and when she was 3 1/2 years old, her parents got the diagnosis they suspected: Their daughter is autistic. That qualified Tara for Switzerland's federal disability insurance, which Wallace says has been an enormous blessing.

"In purely practical terms, what it has meant is that no matter what health care problems Tara has had, they've been covered by insurance," she says, "which is a huge blessing because if you're already worried about a little kid's health, not having to worry about paying for it really helps."

Concern For The Future

The disability insurance pays for Tara's education — she goes to a special school for profoundly disabled children — and all of her behavioral therapy. It also pays for a cleaning lady and household help for the family, since Tara leaves a perpetual mess in her wake, and even for the disposable diapers Tara still needs.

Wallace says what has really pleased her about dealing with the Swiss system is the attitude of the social workers.

"My experience is that there's a lot of trust," she says. "I think they're very fair. They come in and ask a lot of questions, and their job appears to be to try to be helpful and to get you as much assistance as they possibly can."

But as Tara grew into an adolescent, Wallace began to get anxious. She wondered what would happen to Tara after she and her husband died. So Wallace went to see her social worker.

"She said the really key thing to understand is, you don't have to worry," Wallace recalls. "The way the Swiss government approaches this is that every person who is a Swiss citizen has the right to be able to live decently.

"For me, that was just like such a huge wave of relief — to have somebody tell you, you don't ever have to worry about how your child is going to be cared for."

Across the Atlantic, in Gloucester, Mass., Wallace's Internet friend Nancy LeGendre is coping with many of the same issues. But unlike Wallace, LeGendre and her husband, Walter Herlihy, have two teenage autistic daughters, 19-year-old Julia and 17-year-old Lily.

LeGendre also worries about what will become of her girls when she and her husband can no longer care for them. "There are a lot of horror stories" about residential placements, she says, including one she heard from a woman whose child was abused in two different facilities.

So LeGendre, a former research scientist, and Herlihy, the CEO of a biotech company, tried something completely out of the box. They bought a 10,000-square-foot former convent. They hope to convert it into a group home that will someday house not just Lily and Julia, but perhaps several other disabled adults and staff members to care for them.

"I don't know if this will ever be a reality," LeGendre says, watching Lily and Julia splash in the pool in the convent's backyard. But she says her ultimate dream, after a lot of renovations, is to have a place with a workshop that will provide some activity and meet the girls' needs — and be a place where LeGendre and her husband can live, too.

LeGendre says she has been lucky that she and her husband have enough money to supplement the services provided by the state. Today, she has aides who come to help with the girls, who need constant supervision. But there was a two-year wait list to get that help. Things were pretty desperate for a while, she says.

"My own health was degraded. Sleep was huge," she recalls. "My older daughter had great difficulty falling asleep, so I would spend two to three hours in bed with her trying to get her to sleep. ... I was literally getting two to three hours of sleep. And this would go on for months at a time."

Even when she did get services, they weren't always perfect, says LeGendre , particularly when it came to the girls' education.

"You had to stay on top of things, you couldn't just expect it to go well," she says.

Yet Massachusetts is one of the better states in the nation when it comes to helping those with disabilities.

Massachusetts' soon-to-be-final state budget for next year includes nearly $1.3 billion for about 32,000 people with disabilities, according to the Arc of Massachusetts, an advocacy group for people with intellectual and developmental disabilities. That is about $40,600 per person. And it does not include most health care services or other funding provided by the federal government.

Switzerland spent roughly the U.S. equivalent of $9.5 billion on 256,000 recipients of its disability insurance program in 2006, the latest year for which statistics are available. The spending isn't really comparable, since Switzerland's program includes many more benefits and people with many different types of disabilities. But it works out to be about $37,000 per person.

However, the country's disability insurance program has been running a deficit for the past several years, and policymakers there have been trying to tinker with it in an effort to bring it back into balance.

Back in Switzerland, it is easy to see why Tara likes the school where she lives during the week. The grounds are lovely and the classrooms bright and airy. In the center of the campus are dormitories that house students, as well as workshops for disabled adults who have graduated from the school.

Wallace says this is where Tara will live when she and her husband are gone.

And Wallace doesn't hesitate when asked if she considers herself lucky to be in Switzerland.