Accessibility links
NASA's Phoenix Lander Confirms Ice Exists On Mars In the ongoing search to see whether conditions on the Red Planet could once have supported life, NASA scientists extend the Phoenix Mars Lander's mission through September. 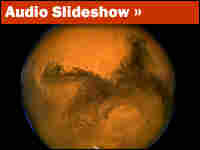 Audio Slideshow: Looking Back On The Red Planet

NASA's Phoenix lander has been on Mars for more than two months. It has sampled the soil, measured the weather and snapped thousands of pictures. One of its missions is to determine whether the Martian arctic is able to support life.

On Thursday, NASA announced that it has found a promising sign: The scoop at the end of the lander's robotic arm has revealed white matter that looks and acts like frozen water. But to prove that it is indeed frozen water, NASA needed to get a sample into the TEGA, an onboard instrument that heats samples and measures what gases are released.

Phoenix Project Manager Barry Goldstein says they could get the white stuff into the scoop, but there was a problem.

It was so clumpy that it would stick to the bottom of the scoop.

"No matter how hard we tried, we couldn't shake it free of the scoop and deliver it to the TEGA," says Goldstein.

So mission managers changed tactics. They had the spacecraft scoop up drier soil and put it into the TEGA. To their delight, even though the sample appeared dry, the instrument showed that the soil contained frozen water.

"Our excitement is not so much that ice is made of H2O," says Peter Smith, the Phoenix lander's principal scientist. "It's what we're going to learn about the impurities that are associated with this ice — salts, minerals and all of the things that are going to tell us about the history and the chance that this is a habitable zone on Mars."

Smith says that if Mars were once a warmer planet, some of this ice may have been liquid.

And there is plenty of ice near the Phoenix landing site. Smith says you only have to scrape away two inches of dirt to see it.

NASA is clearly pleased with Phoenix. The agency announced Thursday that it has extended the Phoenix mission until the end of September.