Accessibility links
Crocs Losing Foothold Among Young Consumers Stock in Crocs Inc. has plummeted 90 percent since October 2007, and many younger buyers are walking away from the colorful clog. But analysts say a fashion fad can turn into an established brand.

A sample of Crocs shoes on display in a midtown New York City shoe store in February 2007. Crocs is an American company founded by Lyndon 'Duke' Hanson, Scott Seamans and George Boedecker in July 2002 in Boulder, Colo. Timothy A. Clary/AFP/Getty Images hide caption 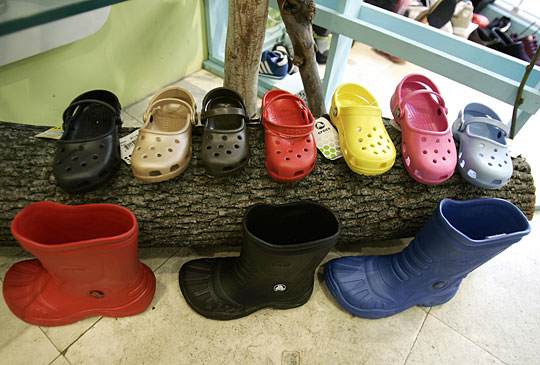 A sample of Crocs shoes on display in a midtown New York City shoe store in February 2007. Crocs is an American company founded by Lyndon 'Duke' Hanson, Scott Seamans and George Boedecker in July 2002 in Boulder, Colo.

Read our brief history of companies that have struggled to maintain a toehold in the footwear business.

Colorado-based Crocs Inc. stock has lost 90 percent of its value since last October, and the company predicts its shoe sales in the U.S. will decline by 20 percent this year.

So what happened? Company officials blame the economy.

"A sharp downturn in mall traffic, and retailers becoming more and more cautious with the frequency and quantity of their reorders, negatively impacted our business during the second quarter," said Crocs CEO Ron Snyder during a conference call with analysts on July 25.

But Crocs also face an image problem, especially among young consumers who see them as an old-person's shoe.

"They're comfortable, but they're stupid. They're ugly," said Ashley Dixon, of Wichita, Kan. "They're big and foamy ... why did they even make them?"

That's a harsh assessment, but one that Crocs knows is out there. The company recently released a television advertisement showing a man screaming at a blue Crocs shoe and asking, "Why are you wearing these? Why? Why? Why?"

"A lot of people believe it's the end for the company.... I don't think so," said Wedbush Morgan Securities analyst Jeff Mintz. "I think they have a viable strategy now." Mintz's company was involved in Crocs' initial public stock offering in 2006.

Crocs hired marketing expert Adam Baker in May. Baker used to work for Nike. The company is making new shoes that look almost nothing like its brightly colored clogs. And Crocs plans to tailor its lines to the stores where they're sold. So, the Crocs you see at Macy's will be different from those at REI.

Mintz says the company needs to regain the confidence of investors and prove that Crocs are more than just a passing fad. 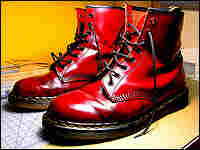 British shoemaker Airwair's Dr. Martens were the expression of rebellion before sales declined in the early 2000s. TheBristolKid/Flickr hide caption

The popularity of the grunge look in the 1970s and 80s transformed the once-boutique Dr. Martens footwear into a household name among urban hipsters — who affectionately referred to the leather boots as "Docs." The British-made shoes, with their hefty soles and iconic yellow stitching, came in a series of designs ranging from 18-hole boots to summer sandals.

But the shoe's performance waned as the fickle world of fashion moved on to newer trends. In 2003 Airwair, the parent company of Dr. Martens, closed down its historic production plants in the United Kingdom to offset declining sales and revenue, and it shifted operations to China and Thailand.

More recently, Dr. Martens has tried to revive its brand by launching a series of edgy marketing campaigns, but the shoe has yet to regain its mainstream glory days of the past.

"Docs" and now possibly the Crocs join a long line of bold shoe styles that once attained cult status, earning parent companies hefty profits — but whose bottom lines ebbed and flowed like the fashion trends that shaped them.

Here's a sampling of a few other "where are they now" shoe stars of the past:

Earth shoes: These understated "earthy" shoes were extremely popular in the 1970s and have recently begun to make somewhat of a comeback. Earth shoes were often deemed low in fashion but high on comfort and durability, mainly owing to their use of ergonomic negative-heel technology — a style in which the heel was positioned lower than the toe. Earth shoe sales hit a peak in 1974, and sales declined quickly as they fell out of style. Although the company declared bankruptcy in 1977, Earth shoes are still available.

Airwalks: Colorado-based Airwalks were introduced in 1986 and became a staple of the alt-skater culture of the1990s — a shoe to challenge the laced-up status quo. The company's low-top shoes evolved into a full clothing line that popularized an active, edgy lifestyle. But in 2003, Airwalks faced foreclosure due to internal business problems, and the shoe was acquired by an outside firm in 2004. Airwalks are now sold through Payless shoe stores.

Timberland: These iconic yellow work boots may have been designed for professional use, but "Tims" gained popularity in the 1990s as luxury consumer shoes with brawn and an air of authority and assertiveness. Over time, the shoes became a wardrobe staple among the hip-hopperati and woodsy suburbanites. But as consumers sought more low-profile footwear, Timberlands fell out of everyday use and are now mainly popular among trade professionals.

Candie's: Bolstered by high-profile celebrity endorsements and provocative advertising campaigns, these midpriced women's shoes were another hit maker during the 1990s. The company dated back to the 1970s, but under the leadership of Neil Cole — brother of famous shoemaker Kenneth Cole — Candie's expanded its offerings to include clothing and eyewear. Sales rose to $115 million in 1999 from $38 million in 1996. But the brand began to struggle in the early 2000s and has yet to regain its once-pervasive standing in the footwear industry. The company recently unveiled actress Hayden Panettiere as its latest spokeswoman, in an effort to target its key young female demographic.

Jelly Shoes: During the 1980s these women's flats, made out of a clear jellylike substance derived from PVC materials, were widely available at very low prices in grocery stores and discount retailers. Often customized with stickers or glitter, "Jellies" are making somewhat of a comeback among fashion-"backward" hipsters and can be found in stores like Urban Outfitters.