Accessibility links
Congress Passes Bill To Lift Libya Sanctions The measure clears the way for final compensation for the families of victims of two terrorist bombings that were blamed on Libya in the 1980s. 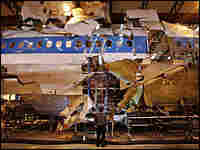 Investigators reconstructed remains of Pan Am flight 103 in an effort that ultimately implicated Libyan agents in the 1988 bombing. Peter Macdiarmid/Getty Images hide caption 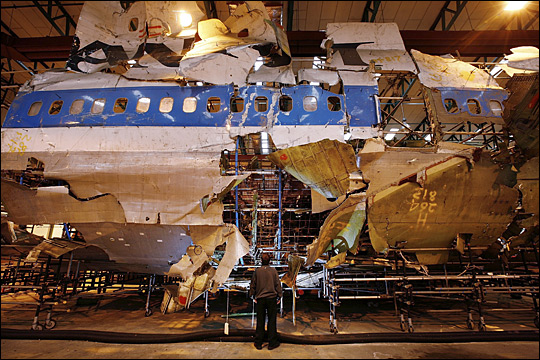 Investigators reconstructed remains of Pan Am flight 103 in an effort that ultimately implicated Libyan agents in the 1988 bombing. 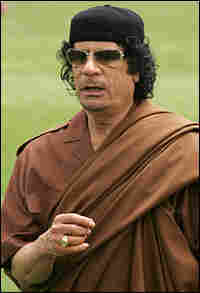 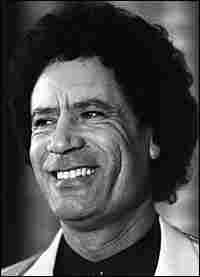 Libyan leader Moammar Gadhafi in the mid-1980s, during a time of clashes with the United States. Keystone/Getty Images hide caption

The Senate has approved a measure that would lift all remaining U.S. sanctions against Libya and clear the way for final compensation for the families of victims of two terrorist bombings that were blamed on Libya in the 1980s.

One bombing downed Pan Am Flight 103 over Lockerbie, Scotland, in 1988, killing 270 people. The other, two years earlier, killed two American servicemen and wounded dozens of others at the La Belle disco in Berlin.

The legislation is the culmination of a years-long process that moved Libya off a U.S. list of state sponsors of terrorism and put it on the way back to normal diplomatic relations. The measure would create a new fund into which Libya would make its final payments to the families of victims, and it would make Libya immune from any further lawsuits related to the two bombings.

The U.S. had no diplomatic relations with Libya at the time of the bombings and was already trying to isolate the government of Libyan leader Moammar Gadhafi as a state sponsor of terrorism.

In March of 1986, a dispute over Libyan claims to the Gulf of Sidra in the Mediterranean Sea led to a clash in which U.S. warplanes destroyed Libyan radar sites and missile attack vessels.

Less than two weeks later, a bomb went off at the La Belle disco in Berlin, which was frequented by American service members. The administration of President Ronald Reagan said it had obtained intelligence linking Libyan agents to the attack. The president ordered airstrikes on Libyan targets.

The attack on Pan Am Flight 103 took place in December of 1988. Investigators found that a bomb placed in the cargo hold of the Boeing 747 passenger jet exploded as the plane was passing over Lockerbie on a flight from London to New York City. The blast killed all 259 people on board, plus 11 townspeople on the ground.

Of the victims, 189 were American.

The bombing was linked to two Libyan men, one of them a government intelligence agent. The United Nations imposed sanctions against Libya, but Gadhafi refused to hand the suspects over until 1999. They were eventually tried by Scottish judges in a court set up in the Netherlands. One of the men was convicted in 2001; the other was acquitted.

In 2003, Libya agreed to accept responsibility for the bombings and to pay up to $10 million in compensation to the families of each of the Lockerbie victims. The money was to be doled out in segments — 40 percent when U.N. sanctions were canceled, and another 40 percent when U.S. sanctions were lifted. The final 20 percent was to have been paid when the U.S. State Department removed Libya from its list of state sponsors of terrorism.

Libya has been removed from the terrorism list, and most sanctions have been lifted.

But the final 20 percent of the payments has been held up by disputes over compensation in the disco bombing and other issues — disputes the newly passed legislation is designed to clear up.

Attorneys representing the families of victims in both bombing cases welcomed the result, saying it would bring their clients' two-decade ordeal to a close.