Accessibility links
Fort Detrick: From Biowarfare To Biodefense Once used as a breeding ground for biological weapons, Fort Detrick, Md., now focuses its efforts on defending against biological threats. Bruce Ivins, who died of an apparent suicide Tuesday, worked at the institute and helped to investigate the 2001 anthrax attacks.

Fort Detrick: From Biowarfare To Biodefense

Fort Detrick: From Biowarfare To Biodefense 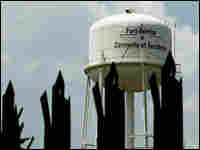 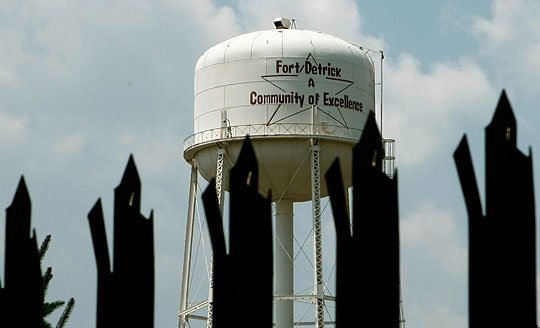 A metal fence surrounds the Army Medical Research Institute of Infectious Diseases in Frederick, Md. Earlier this week, a former scientist for the institute, Bruce Ivins, died in an apparent suicide. Ivins helped investigate the deadly anthrax attacks in 2001.

What Is The USAMRIID?

The U.S. Army Medical Research Institute for Infectious Diseases was established by the Office of the Surgeon General of the Army on Jan. 27, 1969, to develop medical defenses against biological warfare threats. It is located at Fort Detrick, Md.

The institute's scientists develop vaccines, drugs, diagnostics and information to protect U.S. service members from biological warfare threats and endemic diseases. It is the only laboratory within the Defense Department to study highly hazardous viruses requiring maximum containment.

The institute has helped to contain deadly diseases, such as Lassa fever, SARS and human monkeypox, since the 1970s.

Who was Bruce Ivins, and why was he a target in the FBI's investigation of the 2001 anthrax attacks? Here, a look at the questions surrounding the case.

Read a chronology of who was infected in the anthrax attacks and the FBI's pursuit of the culprit.

Fort Detrick, Md., was created in the middle of World War II and became the center for America's biological warfare efforts. But that role shifted in 1969, the government says, to focus solely on defense against the threat of biological weapons.

Anthrax was considered the most important agent. Simulants were tested, and one bomb was readied for production in 1944. One million bombs were ordered, though the order was canceled when the war ended in 1945.

During the 1950s, the biological weapons program was among the most classified within the Pentagon. There was an emphasis on biological agents for use against enemy forces as well as plants and animals.

The Army says no biological weapons were used during the Korean War, though such allegations were made by the Chinese and the Koreans.

One plan at Fort Detrick in the late 1950s was to use the yellow fever virus against an enemy by releasing infected mosquitoes by airplane or helicopter. Detrick's labs were capable of producing a half-million mosquitoes per month, with plans for up to 130 million per month.

The military also tested bombs in Utah with brucella suis, a bacterium that can lead to fever and influenzalike sickness. And scientists at Fort Detrick also worked on a number of possible pathogens that could destroy crops or trees.

By the 1960s, the U.S. biological warfare program had begun to decline, with funding gradually decreasing. There were growing protests in the United States over the use of defoliants in Vietnam and anger about a sheep-kill incident in Utah. That incident occurred in 1968, when 3,000 sheep were found dead in the Skull Valley area, adjacent to the Army's Dugway Proving Ground. Although the findings were not conclusive, it was believed that nerve agents had somehow drifted out of Dugway during a test of aerial spraying.

In 1969, the Army announced that 23 U.S. soldiers and one U.S. civilian had been exposed to a sarin nerve agent on the Japanese island of Okinawa, while cleaning sarin-filled bombs. The incident created international concerns and revealed that the Army had secretly positioned chemical munitions in Southeast Asia.

The Army fort that had its beginnings during World War II is now a sprawling campus of brick government buildings outside Frederick, Md., located an hour's drive north of Washington, D.C.

Government scientist Bruce E. Ivins worked at the heart of Fort Detrick, inside the main building of the U.S. Army Medical Research Institute for Infectious Diseases. It was there that he was one of the leading researchers on anthrax vaccines. The building houses a number of highly secure labs where anthrax spores would be used.

Ivins, who died on July 29, helped investigate the deadly anthrax attacks in 2001. He apparently had been notified that he was to be prosecuted for the five deaths connected to the anthrax attacks.