Accessibility links
Nigella Lawson: Summer's Bounty, With Zest Your local grocery store and farmers market are no doubt running over with vegetables these days. Food writer Nigella Lawson gives tips on how to make a full meal from summer's bounty. 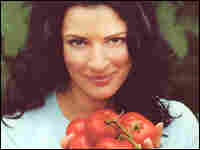 Nigella Lawson: "I can't be stopped at this time of year, with zesting some lemons." Hyperion Books hide caption

At the height of summer, with vegetables bursting out of grocery store bins and farmers markets, a perfectly satisfying meal can be made with little more than vegetables.

British food writer Nigella Lawson spoke with Renee Montagne about how to make a full meal from the summer's bounty.

But first, one question had to be asked: Does British cooking really embrace vegetables?

Lawson confirmed that she comes from a culinary tradition that is not known for its vegetarianism.

"I am such a committed carnivore, it can hardly be exaggerated," she said.

Still, Lawson said, the summer heat and the abundance of vegetables at their peak makes it easy to leave meat out of a meal.

"I take the view that all food is wonderful to eat," she said. "So, I don't really see the point in having a hierarchy."

On her menu this summer is "Happiness Soup" — named for its yellow color, which is associated with happiness in many cultures, Lawson said.

Lawson also suggests a light pasta dish — one that's meat-free, but still savory. She uses mushrooms for texture, and lemon, garlic and thyme for zest and spice.

"The real revelation, I think, is the intense meatiness of the mushroom sauce," Lawson said. "I tend to use cremini mushrooms, but any that you can get at the farmers market or that you grow yourself are just about fine."

And for people with a sweet tooth, there's even a dessert that incorporates vegetables. As you might expect, it's a cake with creamy icing — but instead of chocolate or vanilla, it's based on zucchini.

"It makes such sense when you think about it, but it sounds so odd to start off with," Lawson said.

The zucchinis keep the sponge-cake moist, she said.

With the cake rounding out a colorful meal full of greens and yellows, diners aren't likely to miss their ration of meat.

Besides, Lawson said, "There's something about the colorfulness of vegetables that always makes one feel cheered up." 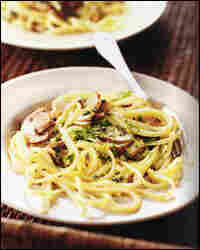 This is one of my proudest creations, and I suppose a good example of a recipe that isn't traditionally from Italy, but sits uncontroversial in her culinary canon. I don't think it would be too presumptuous to name this linguine ai funghi crudi. It is about as speedy as you can imagine: You do no more to the mushrooms than slice them, steep them in oil, garlic, lemon, and thyme and toss them into the hot cooked pasta. I'm afraid I had to have this forcibly taken away from me during the photo shoot for this book, otherwise I'd have eaten it all up before it had even had its picture taken.

The dressed mushrooms also make a great salad, but in which case boost the quantities of sliced mushrooms (keeping other ingredients the same, and obviously you're omitting the pasta altogether) to 6 cups.

If all you can find are regular button mushrooms, this pasta is still worth making – so no excuse for not.

Slice the mushrooms finely, and put them into a large bowl with the oil, salt, minced garlic, lemon juice and zest, and gorgeously scented thyme leaves.

Cook the pasta according to the package instructions and drain loosely, retaining some water. Quickly put the pasta into the bowl with the mushroom mixture.

Toss everything together well, and then add the parsley, cheese, and pepper before tossing again, and eat with joy in your heart.

If you're using raisins, put them in a bowl and cover with warm water to plump them up.

Wipe the zucchini with a kitchen towel (but don't peel them), then grate. The coarse side of an ordinary box grater is the best thing to use: anything too fine or too quick can turn them to a wet mush. When you've grated them, put them in a sieve over the sink to drain.

Put the eggs, oil, and sugar in a bowl and beat them until creamy. Sift in the flour, baking soda, and baking powder and continue to beat until well combined. Now stir in the grated zucchini and add the drained raisins. Pour the mixture into the pans, and bake for 30 minutes until slightly browned and firm to the touch. Leave in their pans on a rack for 5 – 10 minutes, then turn out and let cool on the rack until your filling and icing are ready.

If you don't want to make the lime curd for the filling, then just buy a good lemon or lime curd and sharpen with some freshly squeezed lime juice. To make the cream-cheese icing for the top, beat the cream cheese in a bowl until smooth, add the confectioners' sugar, beating well to combine, and then stir in the lime juice to taste. Now get your cakes ready for assembling. Put one cake on the plate and spread with completely cooled lime curd. Put on the top cake and smear it thickly with the cream-cheese icing. If you feel the icings need firming up a little, put the cake in the refrigerator for a while. Just before serving, scatter chopped pistachios over the top.

As and alternative, cook the same mixture in those large (sometimes called "Texas") muffin pans. When they're cooked and cooled, cut them in half and put the cream-cheese icing in the middle. Pour hot curd over the top, covering each little cake. Refrigerate the cakes until cold and sift confectioners' sugar on top just before serving.

Melt the butter in a heavy-based saucepan, add all the other ingredients and whisk to a custard over a gentle heat. Let cool before filling a jar – or a cake – with it. Keep in the refrigerator.