Accessibility links
Missouri Town Is Running On Vapor — And Thriving The town of Rock Port in northwest Missouri is the first community in the United States to be completely powered by wind. The small community owes its energy independence to the presence of four massive wind turbines.

Listen
Missouri Town Is Running On Vapor — And Thriving 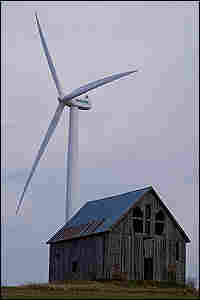 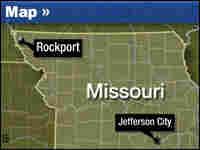 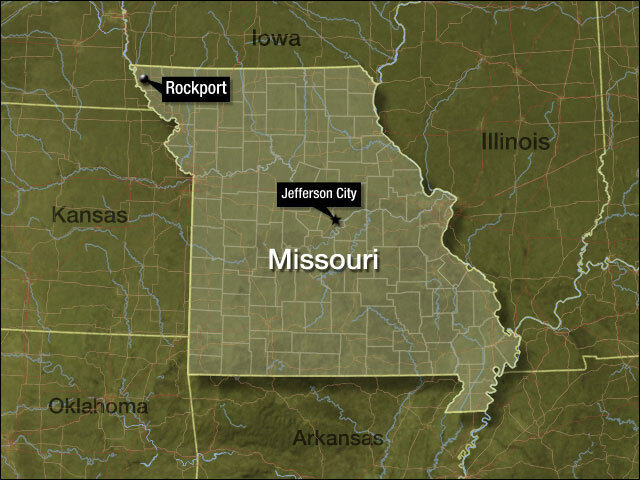 As the United States grapples for ways to break its dependence on foreign energy sources, one tiny town in Missouri seems to have it figured out.

Rock Port, in the northwest tip of the state, has been on the decline for decades, and its population dwindles each year. But a walk up to the old cemetery shows something that has put the wind, literally, back in the town's sails: four massive turbines.

It's the first community in the United States to be powered completely by wind. The town's four turbines generate more electricity than Rock Port's 1,300 residents use — making the town truly energy-independent.

The U.S. Department of Energy wants to make wind energy the source of 20 percent of the country's electricity. Officials admit this could take decades. So how did Rock Port do it? Mayor Helen Jo Stevens says she still wonders "how did this ever happen to a little old town like ours?"

The turbines were the brainchild of resident Eric Chamberlain, who used to work at a mortuary. He says the idea came to him as he was driving to a funeral in northern Iowa. On the way, he passed some wind turbines and thought, "Why can't we do this? We've got wind." He began researching the technology and eventually started recording wind data.

When a wind power developer arrived in the region, Chamberlain made a strong case for why investors should consider Rock Port. Eventually, the John Deere tractor company leased some land and partnered with St. Louis-based Wind Capital Group to bring in Rock Port's wind turbines. There are more than 20 turbines located outside city limits, but the four located in Rock Port are wired to the power grid and provide residents with more power than they can use.

As Chamberlain looks at the turbines today, he says, "Did I ever think this would happen? Naw, not in a million years. ... This is beyond my imagination."

Raymond Henagan runs a small phone, cable and data storage company in Rock Port. He says that when Chamberlain told him about the wind-farm idea, he told him he was off his rocker.

But Henagan says he's seen how much the wind farm has helped protect the town from the rising costs of energy, and skyrocketing prices. "If we can stabilize some of these costs, we can provide good jobs for the future of these young people," he says.

Of course, the wind doesn't always blow in Rock Port, and on days when it's still, residents buy power off the grid. But on most days, the wind generates enough power for the city to export energy. Residents hope their status as the nation's first wind-powered city will help them stop exporting another valuable commodity: its people.