Accessibility links
In Struggling Cuba, Signs Of New Opportunities In Cuba, one of President Raul Castro's most dramatic recent announcements was that he would allow private farmers access to up to 100 acres of idle government land. The plan is a shift toward private enterprise on the socialist island. 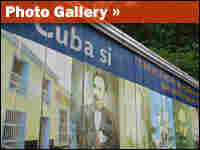 A Different Kind Of Ad Campaign 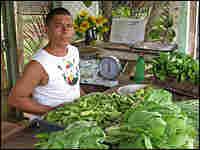 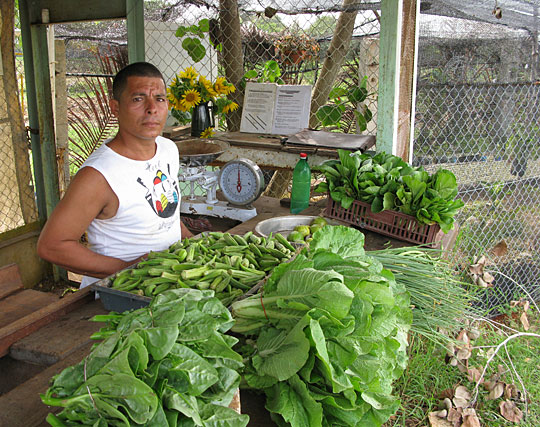 One of Cuban President Raul Castro's most dramatic recent announcements was that he would allow private farmers access to up to 100 acres of idle government land.

The plan is a shift toward private enterprise in the struggling economy on the socialist island.

At one small roadside farm stand on the outskirts of Havana, crisp bunches of lettuce, green beans and okra are piled on a wooden countertop. What is unique, in this case, is that unlike on larger, state-run farms, these growers get to keep the proceeds from their produce.

This cooperative stems from reforms in the 1990s, when the economy was left reeling after the collapse of the Soviet Union.

Last month, Raul Castro's administration announced new reforms that could create even more small farms like this one. The new law will grant private farmers concessions to work large tracts of state-owned land for up to 10 years.

Juan Carlos Avila Fajardo, standing behind the counter at the farmstand, describes the vegetables currently in season. He says he supports Castro's efforts at reform, and that the leader's allowance of farmers to legalize their plots of land will boost the supply of food to the people.

Nationwide, this is something Cuba is desperate to achieve.

"The situation of the agriculture is terrible in Cuba," says Oscar Espinoza Chepe, a Cuban economist and dissident. Espinoza used to be a high-ranking government official, but his support for opening up Cuba's tightly controlled socialist economy has put him at odds with the state. He was jailed in 2003 for criticizing government policy.

"Cuba is importing about 85 percent of the food that we need," he says. "This is incredible because in the past, Cuba was an important exporter of food."

Cuba is offering untended state-owned farmland to private individuals in part because it has so much of it. According to the government, more than half of the farmland in what used to be the world's largest sugar exporter is now fallow.

Espinoza praises Castro's agricultural reforms as steps in the right direction, but he doesn't think they go far enough.

Despite being one of the last Communist regimes in the world, Cuba has allowed private enterprise in several sectors.

Many of the island's tourist resorts, for example, were built with investment from European hotel chains. Foreigners also have invested in mines and factories. And starting in the 1990s, the government allowed some people to open small private restaurants called paladars in their homes.

In the narrow kitchen at La Guarida in Havana, the staff prepares for the afternoon rush. Pans of vegetables simmer on the gas range, and the chef rapidly chops a white onion.

Enrique Nunez started this paladar 12 years ago in an ornate, but crumbling, old building.

His restaurant has been hugely successful but, he says regrettably, most of his customers are diplomats, entrepreneurs and foreign visitors.

"The main reason we don't have Cuban customers is because they can't afford the prices," Nunez says.

The average Cuban worker earns just $20 a month. This would barely cover an order of snapper carpaccio and the pork with mango salsa at La Guarida.

The government allows paladars to seat only 12 customers at a time, but some other establishments overtly flaunt this rule — one paladar across town has exactly 12 tables.

Nunez says he'd like to expand and possibly open up some other businesses.

"I have the ability to do it," Nunez says, "and I think opportunities should come. We have to be patient. I have bet on Cuba and on the future of Cuba, and that's why I'm here. We are simply waiting."

Castro has suggested that he might allow more private enterprise on the island. The new president even said he may lift salary caps. And laying out an ideological break with his older brother Fidel, Raul Castro recently stated that socialism means equality of rights and not necessarily equality of income.

In that same speech, however, he cautioned that the nation is facing hard times and needs to be "realistic." While sending signals that he wants to loosen, somewhat, the state's grip on the economy, he also warned that rising global food prices could lead to even more belt tightening in Cuba.