Accessibility links
Flesh-Eating Fish Perform 'Pedicures' A salon in Alexandria, Va., is treating customers to a beauty fad previously popular only in Asia: the fish pedicure. For $45, tiny silvery carp will suck the dry skin off your feet. The result: smooth loveliness, according to a growing customer base. 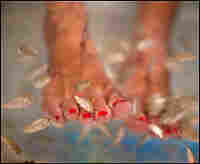 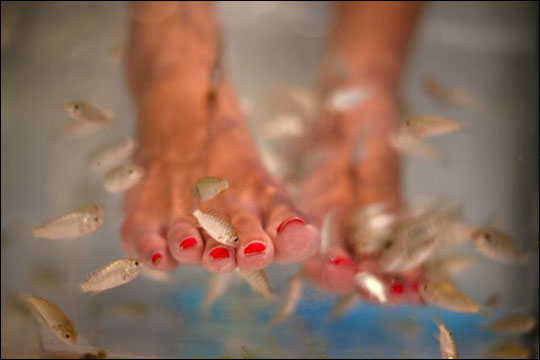 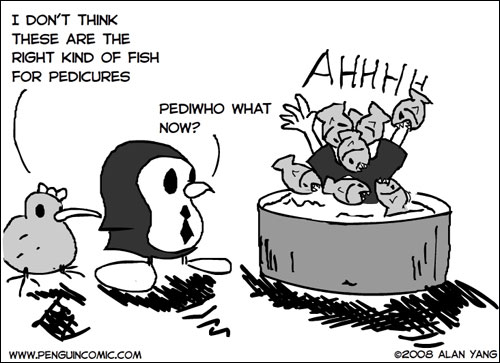 Comic Alan Yang pokes fun at fish pedicures. "I don't think these are the right kind of fish for pedicures." 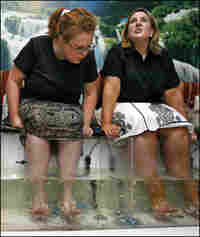 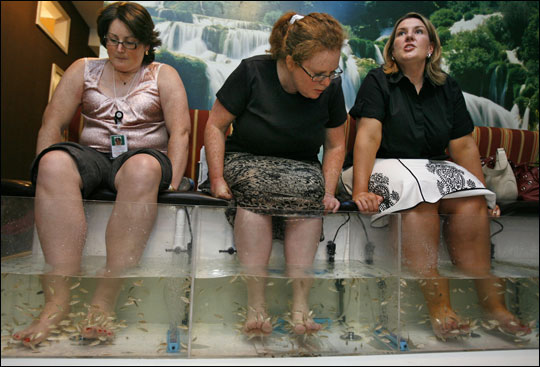 (From left) Tracy Roberts of Rockville, Md., Patsy Fisher of Crofton, Md., and KaNin Reese of Washington, D.C., indulge in a fish pedicure at Yvonne Salon in Alexandria, Va.

What would it take to get you to stick your feet in a tank of fish that feed on human flesh? It's an experience some are willing to pay for. In Alexandria, Va., Yvonne Salon is treating customers to a beauty fad that's new to the U.S.: the fish pedicure.

More than 6,000 customers have tried the $45 treatment since the salon began offering it five months ago, according to owner John Ho. The salon says it's the first in the United States to offer the service.

"We have tripled our volume," he says. "At the beginning ... I was begging people to go in. But you know, it just went haywire."

On a recent Sunday afternoon, the Vietnamese-owned salon is packed. In the back, thousands of silvery carp flit around in a holding pool. At some point, they'll all be transferred into smaller tanks to suck dead skin off customers' feet.

'It Kisses Your Skin'

One such customer, Barbara Campbell, steps into a tank of around 200 fish.

"Which ones are the hungriest? That's what I want to know," she boldly asks a technician.

Known as Garra rufa, the silvery inch-long fish originate from hot springs in Turkey. It's there that they developed an appetite for the only food around — human flesh.

Calm down; Garra rufa, which look like a cross between goldfish and minnows, can't technically bite because they don't have any teeth.

"It kisses your skin," explains Leah Le, who works at the Yvonne salon. "But more it just sucks off your dry skin."

Kelly Jackson, 27, is a fish-pedi convert. She says the experience is better than having a human scrub her feet.

The 'Doctor Fish' Is In

In China and Japan, Garra rufa are known as "doctor fish" and are often used to treat skin problems like psoriasis.

After reading about it on the Internet, salon owner Yvonne Le traveled to China to get a full body treatment.

"I lay down in the pool for 40 minutes," she recalls. "I come out and my skin [was] so beautiful and smooth."

The expensive fish are a gamble for these entrepreneurs, because they're difficult to maintain. Ho says he wakes up in the middle of the night just to check on them.

"There's a lot of risk in taking care of the fish," Ho says. "You've got to give them warm water. If the water [drops] below 70 degrees, they'll die."

The fish stay well fed on a steady supply of human skin. Over the past few months, technician Le has watched them double in size.

"When we first had them, they were tiny. You could feel, like, this little nibbling, and now you can feel the sucking and it's more powerful."

That might sound unpleasant to the uninitiated, but the salon is filled with giggling customers.

"When you go in, you just gotta laugh," Ho says. "I have people who laugh 'til their tears come out. I don't think money can pay for that, you know what I mean."