Accessibility links
Anthrax Case Puts Focus On Security Clearances Bruce E. Ivins, who committed suicide last week, spent his career studying anthrax vaccines. Prosecutors believe he killed five people by sending anthrax through the mail in 2001. But how was someone who reportedly had a history of making homicidal threats allowed access to anthrax?

Bruce E. Ivins, who committed suicide last week, spent his career studying anthrax vaccines. Prosecutors believe he killed five people by sending anthrax through the mail in 2001. But how was someone who reportedly had a history of making homicidal threats allowed access to anthrax?

A spokesman for the lab where Bruce Ivins worked says scientists there who handled anthrax had to go through medical screenings. Lab employees say he also would have needed a national security clearance. NPR's Ari Shapiro reports on how someone described as sociopathic by his counselor could have made it through that screening process.

ARI SHAPIRO: When Bruce Ivins started working at the army's bio-defense research labs back in the '70s, people were not very concerned about limiting access to anthrax. David Danley researched vaccines at Fort Detrick.

Colonel DAVID DANLEY (Project Manager, Joint Vaccine Acquisition Program, Fort Detrick): The emphasis was on creating an open research institution whose scientists were focused on a handful of infectious diseases that could be used for biological warfare.

SHAPIRO: They thought secrecy would make it look like they were developing weapons. And they weren't, he says. They were developing cures in vaccines. Doors were never locked. You could wander the building freely. David Franz ran the research center in the '90s.

Colonel DAVID FRANZ (Former Commander, The U.S. Army Medical Research Institute of Infectious Diseases, Fort Detrick): Most of our scientists had secret clearances but this was primarily so they could look at classified documents. They didn't need the clearances at that time in order to work with the agents.

SHAPIRO: Agents meaning toxic materials like anthrax. People were afraid the enemy would get access to sensitive intelligence, not dangerous materials. That only changed in 2001 after people died from anthrax-tainted letters. After that, everyone at the lab went through a screening.

Col. FRANCE: You couldn't grandfather out of a national background check or clearance.

SHAPIRO: So at some point, Bruce Ivins passed the security clearance test, even though his therapist attested that Ivins had a history dating to his graduate days of homicidal threats, actions and plans.

Michael Woods used to be the FBI's chief of national security law. He says retired law enforcement officers generally do the background checks and there's a wide range in their ability as investigators.

Mr. MICHAEL WOODS (Former Chief, National Security Law Unit, FBI): Whether they're just sort of checking the box, saying yes, they've interviewed you, or whether they're really sort of going into depth.

SHAPIRO: He says people are supposed to reveal everything in these interviews, but often they don't. And once you're approved for a clearance, you're supposed to tell your officer if anything significant happens in your life.

Mr. WOODS: You know, if you get divorced, you get married...

SHAPIRO: You become an alcoholic.

Mr. WOODS: Yes. Now, you could see the problem, obviously.

SHAPIRO: People are required to waive their medical privacy rights when they go through these background checks. But Woods says unless investigators think they have a good reason to study your medical records, they probably won't.

Mr. WOODS: I don't think it's very practical, given the mechanics of the system, to kind of ratchet the level of scrutiny up for everybody. So at the level we have it, it's going to miss people.

SHAPIRO: He should know. At the FBI, Woods investigated espionage cases where criminals had access to the government's most sensitive secrets. Investigators would always ask, how did this person ever get a clearance? Ari Shapiro, NPR News Washington. 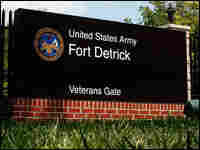 On Tuesday, Bruce Ivins, a former researcher at Fort Detrick Army Medical Research Institute of Infectious Diseases in Frederick, Md., committed suicide after learning investigators were going to charge him with the 2001 anthrax attack. hide caption 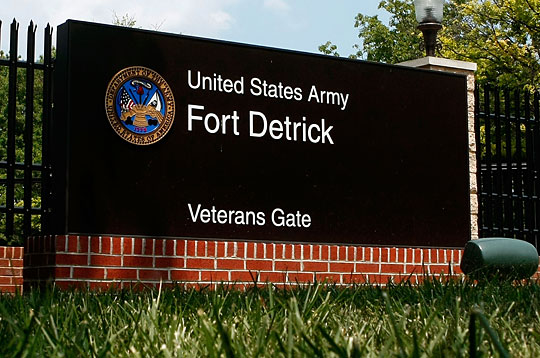 On Tuesday, Bruce Ivins, a former researcher at Fort Detrick Army Medical Research Institute of Infectious Diseases in Frederick, Md., committed suicide after learning investigators were going to charge him with the 2001 anthrax attack.

View the form that federal government workers are required to fill out in order to get national security clearance.

Dr. Bruce Ivins committed suicide earlier this week as the government was about to charge him with killing five people through anthrax-tainted letters in 2001. More than 30 years ago, he was hired to study anthrax vaccines at the Army's Institute of Infectious Diseases in Fort Detrick, Maryland.

David Danley used to work with Ivins and other scientists at Fort Detrick. He says the place was wide open back then.

"There were no locks on the doors, and you could pretty much wander the building without a lot of interference," he says.

It was an academic place, where researchers happened to be studying deadly material.

It wasn't until 1997 that the Centers for Disease Control and Prevention established what it called a select-agent program to regulate "toxins that have the potential to pose a severe threat to public health and safety."

"There was a requirement to register the laboratory, not the individual," says Dave Franz, who was the commander of the research center then.

Labs had to register only if they wanted to transfer something like anthrax from one facility to another. Labs keeping the material in one place didn't have to register at all.

Franz says people studying the disease didn't need clearances in order to work with the agents. Some people had clearances to access sensitive intelligence, but in general, the country was more concerned with protecting secret information than dangerous material.

Danley says things changed at the lab only after five people died from anthrax-laced letters in 2001.

"That's when locks went on doors and armed guards and the whole nine yards," he says.

After that, everyone needed security clearances.

By that point, Ivins had been working at the lab for decades. Even then, a background check apparently failed to catch what his therapist has called "a history dating to his graduate days of homicidal threats, actions, and plans."

Everyone who gets a security clearance has to fill out the same form, called an SF-86. The form asks whether the applicant has ever been treated for a mental illness and requires the person to let investigators view private medical records.

"I don't believe that reviewing a person's medical record is part of a typical security investigation unless there is an indication that there's a concern there," says Michael Woods, who used to be chief of national security law at the FBI.

"Any system will miss someone somewhere," he says. "And the alternative here is to have a much higher level of scrutiny for everybody in the system. I don't particularly want investigators going through my medical records if there's not a reason, a security-related reason to do that."

Security investigations already can take as long as 18 months. Reviewing everyone's medical records would make it take even longer. Woods says there's no good way to overcome the human factor either.

People generally don't want to volunteer damning information about themselves, or about others. The result, Woods says, is a system that will always have flaws.